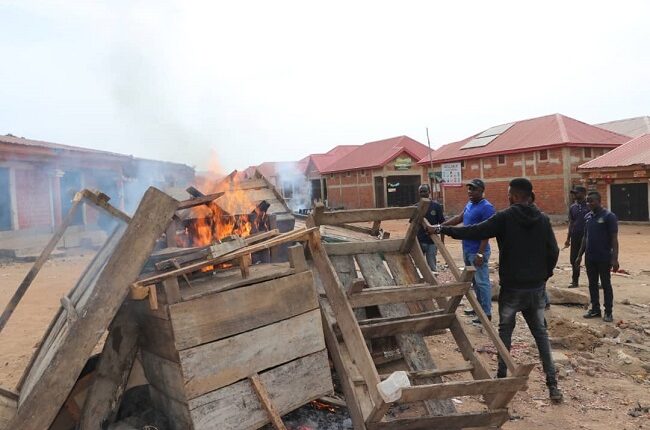 Following the gradual resurgence of traffic build-up along Dutse Alhaji road by the market area, caused by the lack of parking space inside the market, which has been converted into illegally attached shops, authorities of the Federal Capital Territory Administration (FCTA), over the weekend shut down the market for general clean-up and renovation.

The team cleared and burnt to ashes, makeshift shops fastened to the walls of the main shops and the others nailed into the ground on a walk and driveways, and burnt to ashes, clearing the drainage system, heaps of littered polythene materials like plastics and nylon papers, stones and general refuse in the process.

The perimeter fencing of the market earlier built by the current FCT Administration, about two years ago, was also given a facelift as it was all painted, besides levelling up erosion-affected portions of the market.

The team, which arrived at the market in the early hours of Sunday constructed two beautifully giant gates, renovated the fence and installed them at the entrance and exit of the market, replacing the ones that were vandalized and stolen.

Senior Special Assistant to FCT minister on monitoring, inspection and enforcement, Comrade Ikharo Attah who led the Dutse Alhaji team explained to journalists that his principal, Malam Muhammad Musa Bello was determined to keep the market clean at all times and ensure its operation does not impede smooth traffic flow along the road thereby causing road users hardship and pain.

Ikharo said “We want them to know that they cannot have attachments in the markets because that makes it difficult for seamless movement and for cars to come in, and thereby force people to the main roads to block the road for road users to pass freely and suffer them in the process.

“We have been here continuously for this. The FCT Minister, Muhammad Musa Bello who has taken this market as a dear project has tasked us to keep this market under check and keep the road corridor very free. He (Bello) was the one who fenced this beautiful market and has done so much work here putting up the gate, which was broken and stolen.

“Today, we are restoring the gate, painting the fence and carrying out general renovation and clean-up work. We could not have achieved this much with the market on, so we had to close it in partnership with Bwari Area Council to enable us clean it thoroughly in and out.

“All our team from the Abuja Environmental Protection Board (AEPB), Department of Development Control and all others had a free chance to work that is why you can see the market wearing a different beautiful face just as the Minister wants it to look.”

Commenting on the Olajumoke Akinjide section of the market, which was still unkept at the time of the interview, the SSA assured that his men would return on Monday for another round of cleaning, revealing that there were equally serious first and illegalities to be corrected at this market.

“We will go back to the Olajumoke market in Dutse. We never knew the extent of the illegality in that market. We saw it and together with the Bwari Area Council, represented by the Council Secretary, Hon. Eli, we will get back there and purge it very soon.

“Hopefully by Monday morning, because we cannot be doing clean up when they are selling since it is so crowded. We, therefore, asked the traders to join us on Monday morning to clean up the market.”

Advising the traders and buyers to use an alternative market, located near the Army Housing Scheme, Ikharo assured them that the alternative market was of superb quality and one of the best which was visited and endorsed by the FCT Minister.

Secretary, Bwari Area Council, Kadanya Peter Eli who spoke on behalf of the council reiterated the readiness of his council to work in synergy with the FCTA and traders to ensure the market was cleaned in line with the directive of the Minister.

Eli pledged the commitment of the Bwari Area Council to clean up exercises of other markets in the FCT, particularly those within the council.

An Assistant Director in charge of Operations with the AEPB, Kaka Bello assured that his men were on the ground to ensure total cleanup of not just the market but also other areas.

He recalled that the team had, two years ago, cleared the road corridor which paved way for the road expansion and fencing, which he noted, has greatly reduced the hitherto hydra-headed witnessed by commuters playing that road.

Another speaker, Manager of the market, Sunday Marcus, commended the task force and the FCT Minister for working hard to clean up the market from time to time.

Pledging the continued collaboration of all traders of the market, Marcus urged his colleagues to always keep to the rules regulating operation in the market, even as he disclosed that they would set aside a day for general sanitation of the market weekly.

One of the affected makeshift shop owners, Linus Okoronkwo, popularly known as PRO, decried the high cost of buying or renting shops in the market and appealed for a rather better arrangement of incorporating the attachments inside the market to enable the poor also have access to FCT markets to trade for survival.

Demolition of illegal structures will continue during and after yuletide ― FCTA