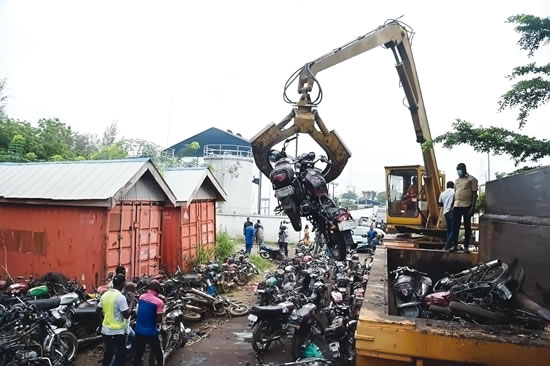 The Lagos State government’s extension of the ban on the operation of commercial motorcyclists, popularly called okada, to four more local government areas (LGAs) and six local council development areas (LCDAs) has elicited reactions from residents of the affected areas.

According to the government, the implementation of the extension takes effect from September 1, 2022. The LGAs affected by the fresh ban are Kosofe, Oshodi-Isolo, Somolu and Mushin while the LCDAs are Ikosi-Isheri, Agboyi-Ketu, Isolo, Bariga, Odi-Olowo and Ejigbo.

But the residents of the newly affected areas have called on the government to provide them with alternatives to the okada means of transportation which they said they were used to.

The state government had earlier banned okada operation in six LGAs and nine LCDAs effective from June 1, 2022, following heightened crime rate and accidents relating to this mode of transportation.

The extension has now brought to 25 the number of the 57 councils in the state where okada activities have been proscribed.

The Commissioner for Transportation, Dr Frederic Oladehinde, at a press conference Thursday last week in Alausa, Ikeja, said the state governor, Mr Babajide Sanwo-Olu, had directed enforcement teams to implement the proscription order and bust erring riders across the councils listed in the ban.

Oladeinde, who spoke at the press conference alongside his counterpart from the Information and Strategy Ministry, Mr Gbenga Omotoso, said the extension of the proscription order was a move by the government to sustain the gains recorded in the ongoing action against okada operations in the state.

According to him, okada accidents and fatalities have reduced by 63.7 per cent across the 15 local councils where the first phase of the ban had been enforced

The commissioner stressed that the development had also significantly brought down the rate of crimes associated with motorcycles, saying this led to resolutions reached at a summit with interest groups Tuesday last week where the participants unanimously urged the state government to make the okada ban state-wide.

The summit was attended by stakeholders from the academia, youths, community leaders, traditional and religious leaders, artisans, representatives of civil society organisations, persons living with disabilities, personnel of security and traffic management agencies, journalists, among others.

The resolution at the end of the summit, after presentations from stakeholders, was a unanimous call for a total ban on okada as a means of public transportation in the state.

This was against the backdrop of major highlights of the summit as presentations by experts revealed an 86 per cent reduction in crime rate and a 63.7 per cent decline in okada-related accidents and reduction in the admission and treatment of okada-related accident patients in public health institutions since the ban took off on June 1, 2022, compared to the statistics for May 2022 and before.

The Olu of Oregun, Oba Tajuddeen Muritala, during the interactive session, condemned the use of okada as a mode of transportation in a mega city like Lagos, calling for its outright ban due to the menace it constituted to the society.

Also, the Onisabe of Igbobi-Sabe, Yaba, Oba Owolabi Adeniyi and the Oniba of Iba, Oba Sulaimon Adeshina Raji, in agreement with their colleague, stressed that there should be proper plan and holistic steps taken to ban okada operation in the state.

“There should be political will power to stop the menace of okada in Lagos once and for all. If the government has really worked for the people, ban on okada should not stop their chances of being re-elected. Issuing of rider’s permit should stop immediately,” the Onisabe posited.

Also at the forum, religious leaders and residents voiced their concerns, calling for a total ban on the activities of okada riders in the state.

A resident, Mr Akinwale Adelaja, a total ban was unavoidable but quickly added that the government must consider the general well-being of the people before taking the final decision.

According to him, the government needs to carry along all the council heads, transport unions and other stakeholders for effective enforcement.

“The government needs the by-in of all the council heads, transport unions and other stakeholders for effective enforcement,” Adelaja said.

Another resident, Mr Abiola Adejumo, shared the same view, urging the government to work hand in hand with neighbouring Ogun State for effective implementation of the order.

“The ban is long overdue but my take is that the government has to work hand in hand with neighbouring states like Ogun for effectiveness,” he said.

Speaking further at the August 18, 2022 press conference, the Commissioner for Transportation, Dr Oladehinde, disclosed that a total of 7,500 motorcycles had been impounded and crushed in the ongoing enforcement, saying that resistance had dropped sharply, even as he warned riders who might want to flout the proscription order to desist as, according to him, “the enforcement would not be sparing.”

He affirmed that the state government had interventions in place to empower the affected okada riders as an alternative means of livelihood, urging them to embrace the intervention programmes which were being coordinated by six government ministries and the Lagos State Employment Trust Fund (LSETF).

“It is important to reiterate the state government’s commitment to the safety, security of lives and properties in the state. In exercising this, any motorcycle impounded will be crushed and the process will be made public.

“Riders and passengers arrested on proscribed routes will be made to face the full wrath of the law in line with the provision of Section 46, sub-section 1, 2 and 3 of the Transport Sector Reform Law (TSRL), 2018,” the commissioner warned.

The Commissioner for Information and Strategy, Mr Omotoso, observed that the earlier stakeholders’ summit on August 16 reviewed the enforcement action taken since the total ban, pointing out that the feedback from the public informed further measures to curtail the activities of the commercial motorcycles.

The commissioner, while maintaining that okada as a means of transportation remained alien to the state’s Integrated Transportation Master Plan, said the ban enforcement would be supervised by the Office of the Special Adviser to the Governor on Transportation.

A resident of Oshodi-Isolo LCDA, Dipo Kolapo, stated that the extension of the ban had both positive and negative effects.

He said: “On the positive effects, it would reduce crime rate and accidents on our roads. The riders have become lawless and reckless and this has led to lot of issues in the state. Northerners have invaded the state with okada business and this is a threat to the security of the state. So, the ban is good riddance to bad rubbish.”

Meanwhile, Kolapo noted that one of the negative effects of the ban was that it would lead to massive unemployment in the state as the riders were using the business as a source of income.

He noted that the ban could also fuel armed robbery in the state as many of the riders could take to crime if they have nothing to do to feed themselves and their family members.

A resident of Shomolu Local Government Area, Tope Sokoya, commended the government for taking the decision at a time when insecurity is at its peak all over the country. He said the government should be applauded because “okada is the means of transportation that criminals now use in perpetrating their crimes.”

Sokoya said taking okada riders off the streets was the best decision in order to have a sane society. He, however, urged the government to attend to the issue of traffic and provide alternative means of transportation to complement the available ones.

Another resident, Aderinsola Shopuloyi, expressed dissatisfaction with the ban extension, noting that there was still insufficient transportation means in the state.

According to Shopuloyi, despite insecurity, okada ban is unnecessary at this time.

The image maker in of the state police command, Benjamin Hundeyin, in an interview with Saturday Tribune, expressed the readiness of the police to implement the new government directive.

“We are aware of the ban on motorcycle operation in four new LGAs. We have mapped out strategies to ensure its full implementation,” Hundeyin said.

My husband accused me of immorality, arrested me with police —Wife

Insecurity: 5,000 Nigerian children may die of starvation by October —UN

Kidnappers disguise as madmen to abduct our children —Lagos community