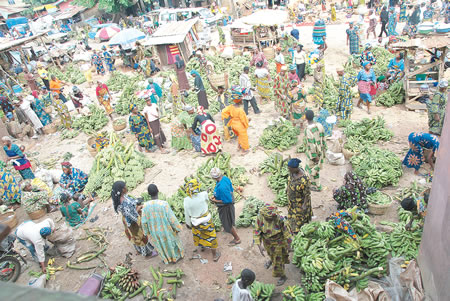 The traders were driven from the major roads by the Da’Green, on Wednesday as part of its duties of preventing street trading and decongesting traffic in Ado Ekiti.

Witnesses said one of the traders, in his efforts to salvage his seized goods from the truck they were dumped, had allegedly fallen off and collapsed, with his co-traders taking him for dead.

“In reaction, they mobilised themselves and stormed the Ministry of Works compound in Ajilosun area of the state capital, where the Da’Green secretariat is located and destroyed seized cars, windows and other property,” witnesses said.

The traders had also vandalised the office of the state’s Commissioner for Works in the vast compound and had sacked the task force workers and others found there.

They had earlier made bonfires at the Oja-Oba market road before heading for the Ministry of Works.

One of the traders, on condition of anonymity, said that “the EKSTMA Da’Green (task force) should realise that this is festive period. Christmas is just four days while New Year is less than two weeks. And it is time like this that selling, especially on the streets booms. So, they ought to allow us to do our business now.

“Many of us have market stalls in the demolished markets and are awaiting spaces in the new Oja-Oba market under construction. We cannot afford to go and get shops now as that would be too expensive. So, they should pardon us for this time. At least, we have obeyed them all along before now.”

Meanwhile, anti-riot policemen dispatched to the scene of protest restored calm after tear-gassing the protesters to disperse them as well as arresting some of them.

The Public Relations Officer of Ekiti State police command, Mr Alberto Adeyemi, said the collapsed trader, who was taken for dead, did not die, but confirmed that he had collapsed and taken for dead.

Adeyemi said he was revived in the hospital, where he is currently recuperating but confirmed that the trader that was not identified did not die in the incident.

He said that normalcy had been restored in the Oja Oba area and that three persons were arrested.

Governor Ayodele Fayose had also gone to the scene of the protest to appeal to the angry traders.

Why some FG agencies are yet to get November salary — Adeosun