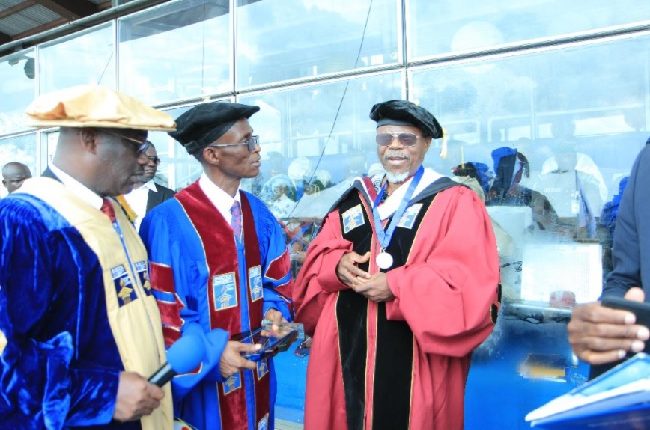 Toyin Falola, a world-renowned professor of History and African Studies, the Jacob and Frances Sanger Mossiker Chair in the Humanities, and university teaching professor at the University of Texas, Austin, recently completed his academic D.Litt. from the University of Ibadan. In doing so, Falola became the first academic awardee of the D.Litt. in the Humanities.At the age of 68! He enrolled for the degree like any other student and went through all the processes and requirements, including rigorous internal and external examinations of his works.

The D. Litt. Academic, it should be noted, is different from the D. Litt. Honorary. Professor Falola is a recipient of thirteen D. Litt honorary degrees, with the most recent in 2019 from Babcock University, Nigeria.

When reached out for his statement, he stated :“It has been over 40 years since I was a student. But learning never ends. The commitment to acquire more knowledge makes me restless. I can’t help it. This is why I enrolled for it. It was not difficult because, as a writer of many books, I get reviewed all the time. It felt normal, and it was over before I knew it. Having had over a dozen honorary degrees in the same humanities, I guess you could say that those who conferredthese honors on me were indirectly passing a message to me that I still have a field they want me to explore.”

He stressed further: “It thrills me every time I receive an honorary doctoratebecause it means that my work is being recognised. It is also exciting to work for one. So, it is more about the knowledge than any pecuniary gains to come from it. My people call me the restless one because that is who I am. And to them, to every school that deemed me worthy of the honorary title, to my ever-supportive wife and children, family, and close associates, I say a big thank you. They have helped me come this far. You know that maxim about if you want to go fast, go alone, and if you want to go far, go with people? I opted for the latter, and my journey with these people has been more than awesome. They all have been supportive, effortlessly.”

Although based in Texas in the United States, Professor Toyin Falola, born in 1953, has been an embodiment of Yoruba values and history. He had his first degree (1976) and his Ph.D. (1981) in History from the University of Ife (now Obafemi Awolowo University). Falola’s teaching interest borders on African history, African methodologies, diasporic, and decolonial studies. He is undoubtedly the most prolific African scholar, with the hype around him everywhere he goes, especially in the academic world. A celebrated personality, he is the most published African scholar, dead or alive. Perhaps one could only lay credence to this by thoroughly reviewing texts and knowledge produced overtime on Africa and strictly by African scholars. Concerning this, the awarding committee of his new title would know best.

Mwalimu Falola, as he is rightly referred to in some quarters, is known for pursuing his intellectual curiosity and interests in many ways possible and communicable. Aside from the Pan-African University Press, which he established to promote fresh ideas about Africa and encourage young scholars to do better than him, the latest of this commitment is his Toyin Falola Interviews where the crème de la crème in the society, from the academics to politics and business, are invited for a discussion on the state of post-colonial Africa.