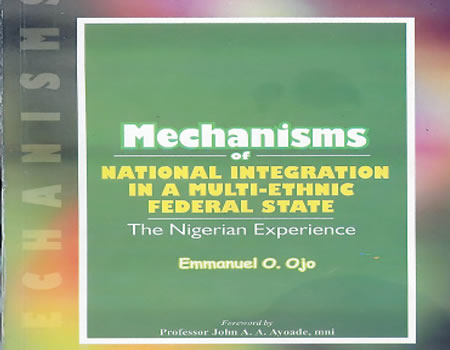 Emmanuel Ojo’s ‘Mechanisms of National Integration in a Multi-Ethnic Federal State:The Nigerian Experience’ is warts and all about the peculiar federalism practised in Nigeria. John Ayoade, who wrote the foreword of the book, Eghosa Osaghae, Rotimi Suberu, Sam Oyovbaire and the author are a few Nigerian scholars who have examined the enigma of federalism in Nigeria.

However, Ojo has gone beyond discussing the theory and praxis of Nigeria’s federalism which has long engaged scholars in ‘Mechanisms…’ Adopting a pedagogical and analytical style, Ojo discusses the interventions introduced over time to keep Nigeria, a notorious multi-ethnic federation, as one.

The author begins the work with an examination of Nigeria’s complex plural nature. He contrasts it with that of countries like India which federal arrangement most approximates the one in Nigeria. He also examines that of Germany, Italy, Malaysia and Switzerland, but notes that minority ethic nationalities and religion are some of the factors that have compounded Nigeria’s federalism. This plural nature, according to Ojo, is a challenge for efforts at national integration.

The author clarifies concepts in the second chapter of ‘Mechanisms…’ Ojo notes that both federalism and national integration are contested concepts and treats readers to the timeless explanations of federalism by scholars like K.C. Wheare, Carl Fredrick, William Livingston, William Riker, Daniel Elazar, Max Frankel and JAA Ayoade. Ojo’s view is that although federalism is reputed to be an effective political and constitutional design for managing problems usually associated with ethnic and cultural diversity, it hasn’t worked in Nigeria because of ethnic cleavages, economic underdevelopment and a weak sense of nationhood. The contending paradigms to conflict management in plural societies are also highlighted here.

The evolution of Nigeria’s federalism is examined in the third chapter. Ojo reflects on what necessitated the amalgamation of the northern and southern protectorates in 1914 and the views of Nigerians, including those of the sage Chief Obafemi Awolowo and the late Tafawa Balewa’s condemnation of the union. The military involvement in governance which further destroyed the practice of federalism doesn’t escape the attention of Ojo who also profiles the three major ethnic groups. In his discussion of the Yoruba, Ojo writes that “…in education, they are far ahead of every nationality, even the Igbo with whom they used to be in competition. There is hardly any nuclear family in the whole of western Nigeria that has not produced at least a university graduate…” Is this empirical and doesn’t it smack a bit of ethnic prejudice that Ojo rightly identifies has made integration onerous in Nigeria?

Sadly, the various integrative mechanisms devised so far to consolidate federalism in Nigeria which Ojo scrutinises from chapters four to eleven have not been successful. Actually, it isn’t that the mechanisms are inherently faulty; the problem is with the implementation. The Nigerianisation policy, National Youth Service Corps scheme and the Unity schools that were introduced to enhance national integration have not been allowed to succeed seemingly by design. There have, in fact, been strident calls for the abolition of the NYSC scheme which officials have turned into a cash cow and whose members are often victims in communal clashes. Apart from the extant problem of quota in admissions, the decision to privatise the Unity schools during the tenure of President Olusegun Obasanjo has also not helped the cause of integration.

Political parties have not fared better in Nigeria’s quest for national integration, though they should theoretically serve as agents of integration in plural societies. Since their emergence in the 1920s, political parties in Nigeria haven’t provided a ‘bridge of unity for peoples of diverse backgrounds’.

The Federal Capital Territory, Abuja, is another integrative mechanism which unsurprisingly failed due to faulty implementation. Ojo draws attention to the factors responsible for this in chapter seven. The politics of state and local government creation exercise he focuses on in the next chapter also failed because like he rightly observed, rather than enhancing geo-political balance, they have compounded the imbalance. The role of the Federal Government in the creation of state and local governments equally negates the doctrine of federalism. It is only in Nigeria that supposed federating units are directed by the central government.

Ojo submits that state creation is not an antidote to the fear of ethnic domination.

Nigeria’s mode of power sharing, an informal arrangement, is examined in the ninth chapter of ‘Mechanisms…’ Sharing elective office based on religion and zoning of political offices are the hallmark of this arrangement but the author contends that it doesn’t always work.

The federal character principle and its faulty implementation is discussed in chapter ten where Ojo, to borrow the words of the inimitable Chinua Achebe, tells us where the rain began to beat us relative to the principle. Ojo touches on the controversial issue of revenue allocation and resource control in chapter eleven.

Confederation as an option to Nigeria’s warped federal system is dwelt upon in the twelfth chapter. Although the two systems do resemble each other in some ways, the author rightly notes that it is not feasible in Nigeria. He says“…It is just an escapist issue which on a serious note cannot be a solution to the convoluting federal arrangement.”

The author’s recommendations for resolving the contradictions in Nigeria’s federal structure are contained in the last chapter. If the parties concerned would heed Ojo’s seven recommendations, they will enhance federalism in Nigeria.

Although Ojo’s pictures of the success of the integrative mechanisms are grim, he hasn’t totally closed the door on hope. He uses ‘convoluting federalism’ which signifies that all is not lost. His use of ‘Convoluting’ which is a process means our federalism is still redeemable. Had he used convoluted, it would have signified hopelessness.

Well-researched with a surfeit of references, this book is a worthy addition to the literature on federalism, which Ojo’s mistake of calling ‘Mechanisms of National Integration in a Multi-Ethnic Federal State: The Nigerian Experience’ on the cover and ‘The Nigerian Experiment’ inside and on the blurb doesn’t detract from.

An infinite brotherhood of broken boys