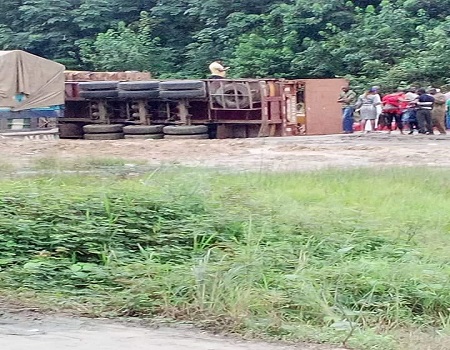 Following the horrible portions hindering the free-flow of traffic along the busy Warri-Sapele axis of the Benin-Warri dual carriage express road, touts have begun to extort money from motorists.

The street urchins, TribuneOnline gathered, stationed themselves at a spot on Adejeh road which serves as an alternative route for motorists coming to and from Benin to Warri.

A driver with a popular national daily identified as Mr Saliu told TribuneOnline on Friday that he had a rough time with the hoodlums when he took the alternative route while on his way from Benin.

“They forcefully stopped me early this morning and harassed me, insisting I must part with N1,000 before I could be given access to continuing my journey to Warri.

“All my please fell flat before the ‘high in drugs’ guys and I was forcefully extorted of N1,000 after they threatened to beat me up,” the driver disclosed.

TribuneOnline had earlier in the week reported the plights of users of the economic road that links four Niger Delta states of Edo, Delta, Bayelsa and Port Harcourt.

The cleric-turned-politician decried the deplorable state of the roads, declaring them as impassible.

Waive, who is the Deputy Chairman of the House Committee on Power, particularly lamented the failed portion of the Adeje section of the Warri/Effurun-Benin Highway in Okpe Local Area of Delta State.

The Reps member, in a statement on Friday, stated that the Adeje axis in the Sapele-Effurun section of the road was in a critical state, considering the fact that the road links the south-south region to the other parts of the country.

Hon. Waive, while charging FERMA authorities to declare a state of emergency on major federal roads for repairs and maintenance, expressed concerns over agonising moments motorist and commuters plying these roads go through daily, which has resulted in too many avoidable deaths.

He posited that Ughelli-Asaba, Warri-Benin, Warri-Agbor expressways and Sapele-Eku road has dilapidated due largely to lack of consistent maintenance over the years considering the volume of traffic on the roads.

“Majority of the Federal roads within and leading to Delta State are in a deplorable state and there have not been major maintenance on most of these road s and the continued usage of the roads by travellers and the carriage of goods and services has dilapidated the roads.

He explained that Delta State being an oil-producing state and its resources attract investors, needs uninterrupted and easy access to facilitate the transportation of crude oil and should have a motorable road to avoid the massive explosion that can lead to loss of lives and properties.

Hon. Waive noted that FERMA State offices are ill-equipped to handle some of the major maintenance works and ostensibly effect repairs on the roads as they are in very bad shape.

He stressed that “with the current situation of the roads, the continual patching of potholes cannot help the condition of the road as it has depreciated far above patching

He added that “with the deplorable state of these roads, my constituents have suffered a lot of untold hardship as mobility has become a nightmare, and the condition of these roads which has brought economic activities to a standstill.

“The terrible state of the road has resulted to untimely deaths of innocent Nigerians and foreigners through avoidable accidents and also resulted in poor productivity of workers as immeasurable man-hours are lost in traffic on a daily basis.

“The experience navigates in that Warri-Benin Expressway during rainy season becomes more terrible as vehicles breakdown, heavy-duty trucks overturn or get stuck in the mud while motorists disembark at very terrible sections of the roads to push rickety and articulated vehicles thereby causing traffic gridlock on the roads.

He stated further that; “the spate of accident on these roads has more than doubled over the years, ostensibly due to appalling state of the road, when going to Warri from Benin, you constantly have to switch lanes when you get to the bad spots and some drivers are not used to the road and they do not expect that a dual carriageway could suddenly become single-lane. And this road has become a death trap for travellers.

Waive stated also that the situation was giving rise to “armed hoodlums who are capitalizing on the state of the Warri- Benin expressway road to rob and maim hapless travellers at the bad spots, as they are aware that motorists would need to slow down to navigate the dreadful portion of the road.”