Tourism: Journey from Ibadan to Layipo 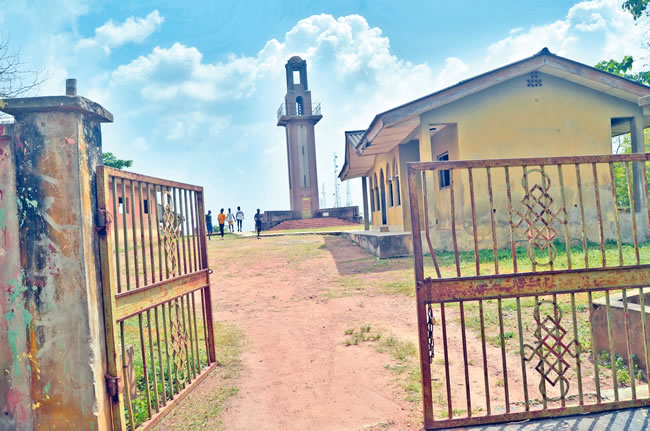 Tourist sites bring nostalgia of history, growth, time and season. It is also expected that culture comes alive when tourist attractions are explored because all that surround a place is often disclosed when there is a landmark. FAVOUR BOLUWADE who visited the popular Bower Tower in Ibadan, which is almost losing its grace and glory, reports how history was made at the site and the feel of  joy it would bring when renovated.

Though built in 1930, the unique architectural creation still looked pristine and well-structured. It is the Bower Tower, located in one of the oldest areas of Ibadan, Oyo State. The tower which is one of the oldest tourist attractions in the largest city in West Africa has an excellent view that could allow one see the splattered brown roofs like broken China J.P Clark had beautifully described in his poem, ‘Ibadan’.

The tower, which gives a panoramic glance of the four corners of Ibadan, was named after Captain Lister Bower, the first British resident and Travelling Commissioner for the Yoruba land in Ibadan during the time. Bower tower is about 60 feet tall and one can view, from Oke Are hill – where the tower stands upon, the surrounding landmarks, including the popular Cocoa House, Mokola Hill, Adamasingba stadium, the Polytechnic, Ibadan, the University College Hospital and the rusty brown roofs around the town. The tower was erected by the engineer who designed the popular Mapo Hall in 1836.

A lot of people do not know the tower because of the poor maintenance over the years, which has made people think the tourist centre is deserted.

Tolulope had almost thought the same too when she stepped into where the tower is situated. She said she had always looked forward to visiting “somewhere cool and not too busy in the Southwest” and for the few years she had lived in Oyo State, the popular places she was used to hearing were Agodi Gardens and the Cocoa House.

“I was glad when I was told a tower existed. The way the place was described made me sceptical at first because I wondered if I would not be the only person who would be there. I decided to then go in company with my friends and it was awesome”, Tolu said.

Another lover of travel, tourism and sites said he discovered the place when he was looking for a good spot to take pictures and videos if he had to do something around nature in a cool area.

Oluwaseun said: “The place was amazing to stay. Cool weather, the ambience and just the comfort of the location was all I needed to find a good spot for my videos and pictures”.

When Saturday Tribune visited the tower, it was not too far from the description given by visitors to the place.

The bushes had grown and one could barely see that there were chalets on both left and right sides of the gate, which according to history, served as a restaurant and mini offices for the workers who were there in the past. The chalets had unused windows and the doors looked either rusty.

With wonder, one could see the tower standing aloft and lonely among the chalets and surounding bushes.

It rises to the sky and only stands to represent tales but is far away from life around it. The tower has two entrances with narrow staircases which were explained as the architectural design that allows one singlehandedly walk through the steps alone to the height where the city can finally be seen.

The caretaker at the tourist site was ecstatic when he saw he had guests that day. He said they at the tower used to have so many visitors but the number reduced drastically when nothing was being done seriously to keep the place alive. He described the life of the Bower Tower as hustling and bustling because of all the activities that would go on there in previous years.

The tourist guide described the state of the tower in the past and now as incomparable.

“This tower is a great place to visit but a lot of people doesn’t know of its existence or if it is in use anymore. The main entrance was the car park which was all functioning in the early 90s. The car park is meant to lead you to the stage where performers would come to play and gyrate to the admiration of guests. There was an administrative office which housed the workers of the tower for duties. In fact, as at 1999, it was a norm to have students from University of Ibadan come around for excursion and sightseeing. The gate fee was N50 naira then. We had several visitors from far and near who wanted to view the city roofs from the tower top.

The restaurant served the guests and the suya spot was also commonly patronised. People ha d fun up till about eight years ago when it felt as if no maintenance was being done anymore.

Speaking with Mr Oni, one of the tourist guides explained that the tower was not really built for war but it had also served as a protective measure for the whites then. Because of the height of the building, he stated that there was very high possibility anyone standing at the top of the tower to have seen the war coming close and would have made such a person clamour for safety as quickly as possible.

Why only one person can take one step at a time

It was an architectural design that allowed you to go through both sides of the tower in one journey, when you are climbing up; you get to see those climbing down and vice versa. You can see those coming out from the other side of the stairways through the tiny holes on each of the step. The spiral movement birth the popular proverbial saying “Ibadan lo mo, o mo layipo” rephrased to simply mean “you know Ibadan, you don’t know layipo.”

Mr Samuel, who works as a guide said: “When the step was commissioned in 1936, our forefathers then who could not speak in English described the spiral staircases by saying “se la n yipo,la n yipo titi ta fi de oke “ which means “ we are just going around the stairs, going around the stairs and we haven’t reached the top”. When they got up, the tourist guide said the men would say again “a se oke lo yii Ibadan ka” (so Ibadan is surrounded by hills) and hence conclude by saying, “Ibadan lo mo,o o mo layipo” (you know Ibadan but you do not know Layipo). This was said to emphasise that even if a person knew the city well and has not been to the Bower Tower where one would ‘yipo’ (go around the tower), such a person has not known the city”.

Though, MKO Abiola was my uncle, I didn’t get to meet him —Actor, Feranmi Oyalowo