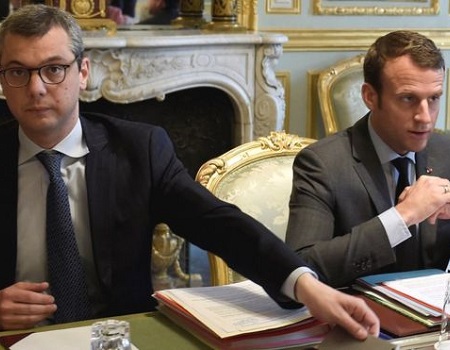 FRENCH President Emmanuel Macron’s chief of staff, Alexis Kohler, is under investigation for alleged influence-peddling and conflict of interest.

The financial prosecutor’s office said it was checking whether Mr Kohler had breached civil service rules when he was handling issues relating to the Mediterranean Shipping Company (MSC).

He has denied wrongdoing. His family has links with Italian-Swiss MSC.

He and Mr Macron both studied at the elite institutions Sciences Po and ENA.

Mr Kohler, 45, is one of the president’s closest aides. The Elysée Palace dismissed the allegations against Mr Kohler as “completely unfounded”.

A French anti-corruption watchdog, Anticor, filed a criminal complaint against him.
MSC secured several state contracts while Mr Kohler was a senior official in the economy ministry.

In 2016 Mr Kohler left to join MSC as finance director, but continued to work on Mr Macron’s bid for the presidency. He was rewarded with the top staff position at the Elysée Palace in May 2017.

Anticor said its complaint was based on research done by the French news website Mediapart.

Mr Kohler has been described as the only close colleague Mr Macron really listens to, and it was Mr Kohler who announced the choice of Edouard Philippe as prime minister.

A simple guide to understanding hypertension