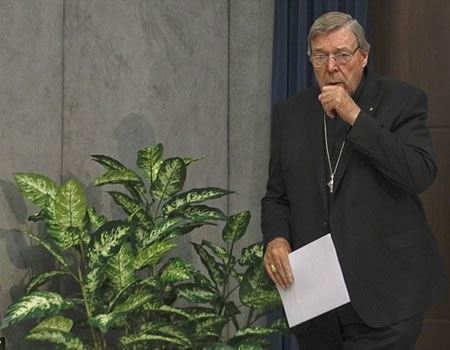 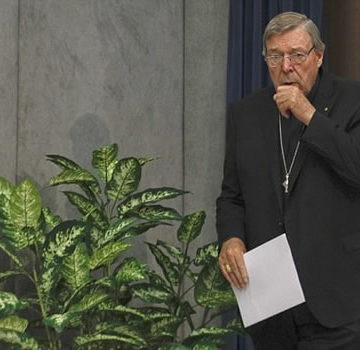 CARDINAL George Pell, a senior adviser to Pope Francis and the third-ranking official in the Holy See, is taking leave from the Vatican to fight historical sexual assault charges in his home country of Australia.

The case is the latest black mark against the Catholic Church, which has been reeling from sexual abuse scandals across several countries that date back decades. It could also have ramifications for Pope Francis, who counts Pell among his closest aides.

Australian police have not released a detailed list of charges against Pell and didn’t disclose any information about alleged victims, saying only that there were multiple charges and “multiple complainants.”

Pell said he had been the victim of “relentless character assassination,” as he held a news conference early Thursday in Rome to rebut the allegations.

“I’m innocent of these charges, they are false,” Pell said. “The whole idea of sexual abuse is abhorrent to me.”

Pell will be required to appear in the Melbourne Magistrate’s court on July 18 for a filing hearing, when a full charge list is expected to be released.

Police said he was not receiving any special treatment, despite his elevated status as the Vatican’s treasurer.

“I want to be perfectly clear — the process and the procedures that have been followed in the charging of Cardinal Pell have been the same that have been applied in a whole range of historical sex offenses whenever we investigate them,” Victoria Deputy Police Commissioner Shane Patton said at a news conference.

“Cardinal Pell has been treated the same as anyone else in this investigation.”

Pell said he looked forward to defending himself against the claims, which have swirled around him in the Australian media for some two years.

“All along, I have been completely consistent and clear in my total rejection of these allegations. News of these charges strengthens my resolve and court proceedings now offer me an opportunity to clear my name,” Pell said. “I’m looking forward finally to having my day in court.”

SNAP, the US-based Survivors Network of Those Abused by Priests, welcomed the development. “We are always grateful and encouraged when law enforcement works hard to gather evidence to build a case against a powerful and influential man,” the group said in a statement.

Sex abuse and cover-up within the Catholic Church have been documented in the United States, Ireland, Brazil, the Netherlands, Germany and Australia.

But the allegations against Pell, given his high rank in the Vatican and his position as Australia’s most senior Catholic, could bring a new dimension to the scandal.

“It’s not every day that a senior Vatican official is facing criminal charges,” CNN Senior Vatican Analyst John Allen said. “It’s going to cast a new spotlight on Pope Francis’ track record in dealing with the abuse crisis, which frankly I think most observers would tell you is kind of mixed.”

In 2013, Pell was named as one of eight cardinals tasked by Francis with investigating ways to reform the Catholic Church. The following year, he was appointed to head the Vatican’s newly created secretariat for the economy.

“His role is to oversee the budgeting processes and financial procedures of the Vatican,” Allen said. “If it’s analogous to the US government, he would basically be the secretary of the treasury.”

Pell did not attend Thursday’s Mass at the Vatican, celebrated by Pope Francis, and will not take part in any public events before he leaves for Australia, Vatican spokesman Greg Burke said.

When asked about the allegations against Pell last year, Pope Francis said he’d defer to the courts before making his own judgment.

“One mustn’t judge before justice judges,” Francis said, according to Vatican Radio.

Pell has previously denied covering up abuse committed by priests when he served as the Archbishop of Melbourne from 1996 to 2001. But he acknowledged his predecessor, Archbishop Frank Little, now deceased, had destroyed documents to protect priests.

A 2013 Australian government inquiry, the Royal Commission into Institutional Responses to Child Sexual Abuse, found that 7% of priests in Australia were accused of abusing children, from 1950 until 2015. At least 1,880 alleged perpetrators were identified and 4,444 victims came forward.

The office of Pell’s successor in Melbourne, Archbishop Denis Hart, released a statement saying he believes Pell is entitled to a fair trial.

“Cardinal Pell has been a friend and brother priest of Archbishop Hart for more than 50 years,” the statement said. “It is a matter of public record that Cardinal Pell addressed the evil of sexual abuse in the Church on becoming Archbishop of Melbourne in 1996.”

The latest announcement is likely to deal a serious blow to the reputation of the Catholic Church in Australia, which has seen its membership shrink in recent years. The 2016 census results, released Tuesday, showed that Catholics no longer make up the top religious affiliation in Australia.

The Vatican issued a statement Thursday praising Pell’s work in combating sex abuse — including cooperating with authorities and introducing systems in order to help protect and assist minors in Australia.

“The Holy See expresses its respect for the Australian justice system, which will have to decide the merits of the questions raised,” Burke said. “At the same time, it’s important to recall that Cardinal Pell has openly and repeatedly condemned as immoral and intolerable the acts of abuse against minors.”

In 2015, Pope Francis created a church tribunal to judge bishops who fail to protect children from sexually abusive priests.

In the United States, analysis of information on 110,000 priests who served the Church between 1950 and 2002 found that 4% of them had been accused of abuse.

Before the Australian Royal Commission, Pell was largely seen as indifferent to the scandal, according to Allen.

Church needs to be humble, says Pope on Palm Sunday