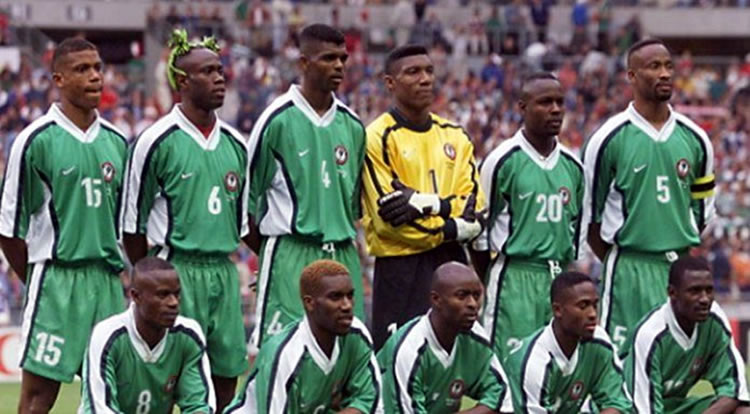 At 36 years of age, Martins is still playing professionally having represented a host of European clubs including Inter Milan, Newcastle United and Wolfsburg. He’s never been a prolific goalscorer, but his sheer pace and tenacity made him an asset to every club he’s been at. He’s also racked up 42 caps for Nigeria.

Ameobi is a Newcastle United legend, having spent 14 years at the Geordie club as a professional after joining the youth set up a few years earlier, scoring 53 goals in total. He didn’t get many games for his country, amassing only 10 appearances, but his talent was undeniable.

Probably the most famous Nigerian goalkeeper and the all-time most capped player, with 101 appearances for his country. His move to Lille in 2011 put him on the European map and he was well-known for this shot-stopping ability. A true Nigerian football legend.

Remembered fondly by Everton fans, after spending nine years at the

Premier League club. Yobo was a no-nonsense, old school defender, which made him an asset for club and country. He is tied with Enyeama for most Nigeria caps, with 101.

Keshi is attributed with “bringing Nigerian footballers to Europe” after he joined Belgian club Lokeren in 1986. He got 60 caps in total for the national team, leading them to African Cup of Nations victory in 1994, and is now the head coach of his country.

George made a name for himself after joining Ajax in the Netherlands in 1993, where he won eight major titles, including the 1995 Champions League, making him one of the most decorated Nigerian players of all time. He amassed 62 caps and went to two World Cups with his country.

Yekini was a bit of a journeyman in his club career but was always a talented goalscorer. He was also prolific for his country, scoring 37 goals in 58 games, making him the all-time top scorer for the Nigeria national team. Fully deserving of his place on this list.

“The Yak” as he’s affectionately known was a staple of English Premier League football between 2003 and 2012, with stints at Portsmouth, Middlesbrough, Everton, Leicester and Blackburn Rovers. He was well-known by defenders for making himself a handful and was an expert at poaching goals. He also earned 57 caps for his country, scoring a respectable 21 goals.

Nigeria’s answer to Ronaldinho. The attacking midfielder was a joy to behold with his wonderful skills and close control which earned him justifiable fame during his professional career. His periods at Paris Saint-Germain and Bolton Wanderers are his most notable. He also earned 73 caps for Nigeria.

The undisputed king of Nigerian football. Kanu’s time at Ajax saw him win three league titles, the UEFA Champions League, UEFA Super Cup and the Intercontinental Cup. He then moved on to Inter Milan, where he won the UEFA Cup, before joining Arsenal in 1999, where he was part of the infamous ‘Invincibles’ season of 2003/4. He also earned 87 Nigeria caps, scoring 12 goals.

Private institutions are not money-making ventures (4)