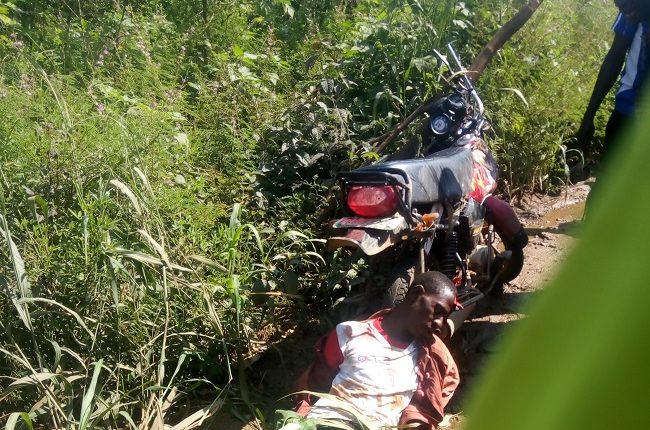 A middle-aged Fulani man who was riding on a motorcycle was crushed to death by a tipper carrying sand along Ibadan-Iwo road on Tuesday morning.

According to eyewitnesses, the deceased was pushed to the front of the tipper, which was on a high speed, by a mini Micra car. The Fulani man who was said to shuttle between Iwo-Olodo died on the spot, with his left hand and right leg damaged beyond repair.

Commuters and residents of the area who spoke with Tribune Online blamed the unfortunate incident on the bad state of the road,  which according to them, has over the years claimed several lives of the users. “If any stranger passes through this road at night, there will surely be an accident, because this road requires wisdom to drive on,” one of the commuters said.

The scene of the accident was getting violent as at the time of filing this report, as relatives and friends of the deceased vowed to attack any mini Micra car that passes through the road because according to them, the driver of the Micra car and the car which caused the man’s death were nowhere to be found.

They have however secured the scene, with the tipper which crushed the man to death on the ground, waiting for the arrival of the police.