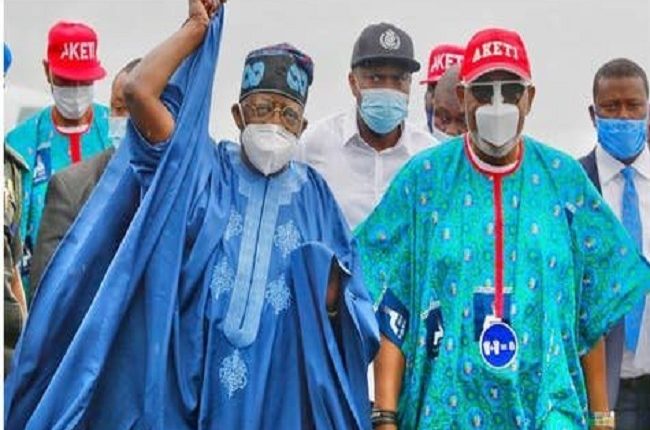 National leader of All Progressives Congress (APC) and former governor of Lagos State, Senator Bola Tinubu, on Saturday, called for a review of the cumbersome revenue sharing formula in order to empower the various states across the country.

Tinubu who stated in Akure, Ondo State capital, while inaugurating the Ondo Revenue House, said a review of the revenue sharing formula for the three tiers of government would ensure developing the grassroots.

He said the economic realities that have contorted the income projections of different tiers of government in the country necessitated the call for the review of revenue sharing formula.

He said “The cumbersome revenue formula of Nigeria as at today needs to be reviewed.

“If the fiscal element of our Nigerian economy is strictly well supervised, we can turn our population to prosperity instead of our liability”

Tinubu however, charged the southwest governors on the need to work out means to develop to the zone in order for the zone to take its rightful position of excellence in the country.

“You can equally use the synergy with the Odua investment to collaborate not only on Amotekun syndrome.

“Amotekun is a creation of necessity for hoodlums caused by unemployment, frustrating and hunger.

“Amotekun is a child of necessity. By the time all Nigerian youths are gainfully employed, Amotekun will become a pet….”

“If everybody is engaged Amotekun will be a pet. If you work with Odua investment look at the area of collaboration. I know Ondo for great potential for gas, energy and tourism to feed this country.”

Tinubu noted that the state governor, Mr Rotimi Akeredolu, has laid a good and solid foundation for the development of the state with the renewal of infrastructure across the state.

He, however, enjoined the people of the state to pay their tax, saying this would usher unprecedented development in the state

He said “since Akeredolu came on board in 2016, the governor has had his hands on the plough, recording one milestone after another.

“Among the laudable projects he has launched is the Ore Industrial Hub which was commissioned by President Buhari.

“That industrial hub will bring needed employment and economic development to the deserving people living in the Ore vicinity. Step by step, project by project, industrial hub by industrial hub is how we construct the foundation for durable progress and prosperity.

“Governor Akeredolu has done more than talk development; he has dedicated himself and his government to bringing development to this state”

Speaking, Akeredolu said he is determined to follow the blueprint of Tinubu in developing the state, saying his administration has been able to turn around the Internally Generated Revenue of the state from N700m to N2bn.

EDITORIAL: FG’s Gaffe On Amotekun
FOR the umpteenth time, the presidency stirred the hornet’s nest recently. Against the run of logic and the law, it declared that regional security outfits such as Amotekun would be subsumed under the existing policy architecture.  Senior Special Assistant to the President on Media and Publicity, Garba Shehu, featuring…Tinubu calls for review  Tinubu calls for review

E Ink Tablets Are Fast Replacing Pen And Paper.
E Ink tablets are devices that allow you to do the things you can do with a pen and notepad, which is to take notes for keeps with the possibility of reviewing later. The simplicity of these devices is so amazing that using them is just like using pen and paper. Technological advancements have made lots of people turn to…Tinubu calls for review  Tinubu calls for review

22 Christians And Muslims Leaders Unite For Peace In Kaduna
Muslim and Christian leaders in Kaduna State have called on adherents of both religions to stop conducts that are unbecoming of their faith but to embrace peace instead. The leaders of faith spoke at Sir Kashim Ibrahim House, Kaduna when Governor Nasir El-Rufai inaugurated the House of Kaduna Family, a platform…Tinubu calls for reviewTinubu calls for review