Arts and Culture
By Akintayo Abodunrin On Sep 15, 2019 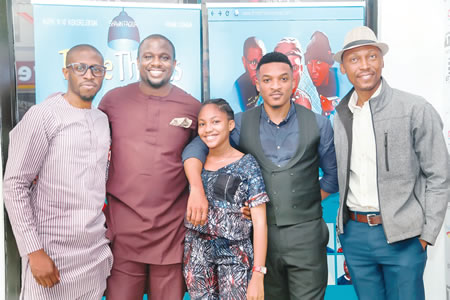 WHAT do you do when a prank becomes real, and you need to deploy all your survival skills to free yourself from a clear and present danger?

This is the question at the centre of ‘Three Thieves’, an action-comedy and the second feature film of Trino Motion Pictures, a film production, marketing and distribution company that will open in cinemas on October 4.

Written by the trio of Sammy Egbemawei, Abba Makama and Africa Ukoh, with Udoka Oyeka as director and Uche Okocha the producer, ‘Three Thieves’ is a rib-cracker sprinkled through with lessons for the old and young.

Tega (KoyeKekere-Ekun) is a happy-go-lucky guy down on his luck alongside his friends, Oreva (Shawn Faqua) and Rukevwe (Frank Donga) in their little part of Festac Town. The trio does menial jobs for survival and like every ambitious young man, desire riches.

Tega is cooling off at a local pub one evening when a job that would fetch millions of naira falls on his lap out of the blue. What’s the gig? A fellow, who mistakes him for a professional robber, wants help in executing a robbery. The sweetener for him is that no one would be at risk during the operation. He promptly enlists his friends in the plot. The trio is pleased to have the opportunity to make millions of naira without seemingly putting anyone at risk, especially considering their present financial predicament.

Even without any previous experience, they assumed it would be a piece of cake. But then, the trio didn’t reckon with Murphy’s Law about anything that could go wrong doing so.The amateurs bite more than they can chew when the original professional robber comes after them even as they try to avoid the police. Their inexperience as they scheme to execute a successful job with the other notorious gang comprising individuals with unusual names like Pirate, Battery, Pin Mouth and Charger hot on their heels, is hilarious.

Added to the tale of the bumbling rookie thieves is that of the family that neglects their daughter because the wife is expecting a male child. The neglected child, Fuwe (Angel Unigwe) would eventually play a significant role in the robbery.

Aside from the exciting storyline and tight plot, the movie also scores high on technicality with the director of photography, KaghoIdhebor Bishop, cooking magic with crisp shots from excellent angles.

Speaking in a chat after the screening, the director, Oyeka, expressed hope that people would find the movie as enjoyable as he did directing it. He said, “It was a pleasure putting this film together. The synergy between the three guys made my job easier and made the time on set a lot more fun. I am excited for everyone to see this project and share in the happy spirit it brings.”

The writer, Egbemawei, expressed the same sentiment while appreciating his co-writers. “For me, the characters were live from the scripting stage and seeing it brought to life; I can say justice was done. Writing this with great minds like Abba Makama and Africa Ukoh who could share in the vision I had for the story was indeed amazing,” he noted.

Would a movie on your life sell?

Atiku versus Buhari judgment: What implications for electoral sanity, eligibility?