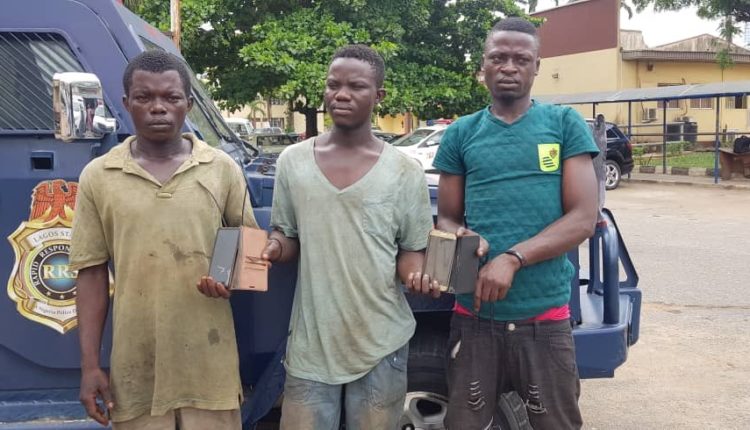 Three suspected robbers who dispossessed stranded people waiting for vehicles in the Oshodi area of Lagos State of their money and phones were in the morning of Saturday arrested by men of the Lagos State Police Command.

They were said to have attacked the people who were waiting to board vehicles that were very scarce due to the lockdown in the state to their destinations late on Friday night, forcefully collecting money, phones and other valuables from the people.

Luck however ran against them when, following complaints lodged to the police by one of the people, men of the Rapid Response Squad of the Lagos State Police Command tracked them with one of the phones stolen and arrested them inside their hideout.

They are currently undergoing investigation at the state police command headquarters.

According to the RRS in its twitter handle, “These three lot were caught early this morning by police officers for robbing stranded passengers in a vehicle late last night around Oshodi. They dispossessed the occupants of their money amounting to N10,000 and stole their phones (Samsung A70 and Samsung A30+).

“They were tracked to their hideout where they were arrested and the loot recovered from them.”

Clinical Trials For Possible COVID-19 Treatment Ongoing ― FG
The Federal Government has said that clinical trials for possible Coronavirus (COVID-19) treatment were ongoing. Dr Osagie Ehanire, Minister of Health, said this on Friday in Abuja, at the Presidential Taskforce (PTF) briefing on COVID-19 in the country. Ehanire said that all efforts would not be effective if Nigerians do not… Read full story

Father, Mother, All 11 Children Catch Coronavirus In Spain
An entire Spanish family of the father, mother and eleven children have contracted coronavirus and are under strict isolation in their home, the Daily Mail of UK reported. The Cebrian Gervas family have been forced to lock themselves away in Valladolid in north-west Spain after every single one of them was diagnosed with the virus… Read full story

Rape saga: ‘Kogi commissioner yet to be sacked’