Top NewsLatest News
By Tunbosun Ogundare - Lagos On May 27, 2020 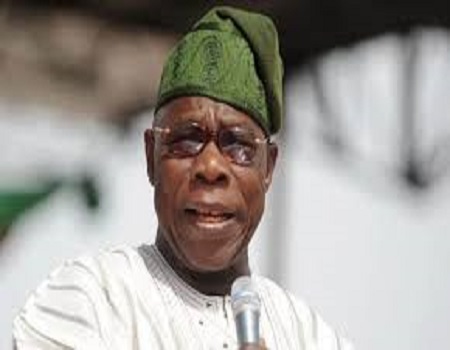 Former President Olusegun Obasanjo has identified three key lessons that Nigeria and its people should learn from the raging coronavirus pandemic in the country and globally.

He also asked Nigeria and other African countries not to continue blaming the past for the current economic woes in the continent.

Obasanjo made the observations on Wednesday at a virtual book launch organised by Afrobarometer, a non-governmental organisation based in Ghana on behalf of The Brenthurst Foundation of South Africa.

Obasanjo was a discussant at the event alongside former Prime Minister of Ethiopia, Hailemariam Desalegn and that of Thailand, Abhisit Vejjajiva. The 313 pages book which was launched is titled: “The Asian Aspiration: Why and How Africa should emulate Asia,” and was published by The Brenthurst Foundation.

According to Obasanjo, there are three major lessons he believes Nigeria should learn from the COVID-19 pandemic.

The first one, he said, is to attach great importance to the issue of food security in the country and take it more seriously in the country’s economic policies and implementations.

“It is now this time of coronavirus pandemic that the country knows how important it is to be self-sufficient in food production and especially in most of the essential ones,” he stressed.

According to him, Zoom and other virtual platforms have given people during this current pandemic and lockdown across borders opportunity to meet for economic activities and this will be the way to go after the pandemic.

“But there is a problem again on this,” he noted, “and that is when considering the huge number of out-of-school children in a country like Nigeria. We have to do something about this.”

Speaking further, Obasanjo said the third lesson for Nigeria and other African countries to learn is to encourage and utilise the Africa Free Trade Agreement among countries by doing bi-lateral and multi-lateral trading within the continent.

Obasanjo, who also spoke on the importance of integrity and competency of people in control of resources at government and private levels, said COVID-19 pandemic despite its destructive nature to humans and resources has become an eye-opener to areas of priorities for African countries including Nigeria to focus after the crisis.

On blame games by successive governments in Nigeria and other African countries about the past, Obasanjo said that though the past could not be totally ignored so as not to make the same mistake of the past, Africa should not be shackled by the past rather forging ahead for meaningful development.

He said African problems are self-inflicted due to bad leadership and poor institutions, as well as what he described as pervasive corruption, especially in governance rather than continued blaming colonial masters.

“So, we should not allow ourselves to be held bound by our past,” he said.

On their separate contributions, former Ethiopia and Thailand leaders, Hailemariam Desalegn and Abhisit Vejjajiva, said even though African countries have much to learn from Asian countries that within a generation not only overtook African countries but also left them far behind in the level of economic prosperity, the development of Africa countries is in the hands of Africans and not from outside.

According to them, there is a need for economic diversification and constitution of strong leadership and institutions to take many out of poverty in no time on the continent.

FG to release guidelines for reopening of schools at a safe time, says PTF