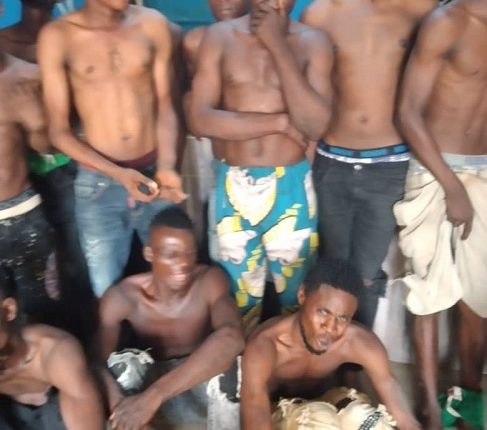 No fewer than three persons have been killed as rival cult group clashed in the Dalemo area of Lagos.

Nineteen persons suspected to be members of the warring groups, Eiye and Aiye have been arrested by the police in the state.

Tribune Online gathered that trouble started last Saturday when one of the leaders of the Eiye group was killed around Dalemo.

It was further gathered that the news of the death of the cult leader sparked off instant violence from members of the Eiye cult group.

Members of the Eiye group reportedly went on a rampage and used the opportunity to rob innocent and unsuspecting residents of the area.

A resident of the area, Ademola said: “Many students did not go to school today because of the apprehension that the groups may clash again.

“It actually started on Friday, when one of the cult leaders was killed and members of his group in a bid to avenge his death, went on a rampage.

“They invaded the street with dangerous weapons in search of their rival and they used that opportunity to rob innocent residents and loot shops.

He also stated that “they did not even care of the presence of policemen at the Alakuko division, which is just a stone throw from here. They shot and created instant panic in the area.”

It was gathered that apart from the cult leader, two others are feared dead in reprisal attacks from the two groups.

The image maker in charge of the state police command, Muyiwa Adejobi, confirmed the clash between the two groups and added that 19 suspects have been arrested.

Adejobi said that the Lagos State police boss “confirmed the arrest of nineteen (19) suspected cultists during the crisis. Items recovered from them included dangerous weapons, assorted charms and weeds suspected to be Indian hemp.”

He added that “the Commissioner of Police set the record straight that the intelligence at the command’s disposal revealed that the hoodlums came from Ota axis of Ogun State to lay siege on the affected border communities on cult-related crisis and the command has been repelling them.”

Adejobi confirmed that “The command has deployed additional police personnel, including Police Mobile Force, to curtail the hoodlums; and restored normalcy to the crises affected communities.

“He has also directed that the arrested suspects be transferred to the State Criminal Investigation Department, Panti, Yaba for discreet Investigation.

CP Hakeem Odumosu, however, called on the community leaders in the areas to support the police in combating the crisis and getting rid of the bad boys and their antics in their respective areas and in the state at large.

He assured that the command is working assiduously with the Ogun State Police Command to decimate the activities of the hoodlums and cultists in the border areas and towns across the state.

However, Nigeria recorded fewer COVID-19 infections and deaths when compared to the previous week. It also recorded increased recoveries during the same period…Three killed in Lagos cult war, 19 suspects arrested

Strike: We recorded over 95% compliance in UNILAG, 100% in LASU, say SSANU, NASU