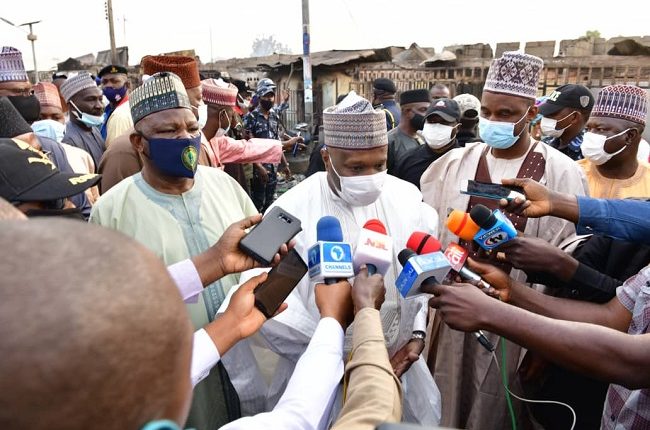 At least three people have been killed while a number of buildings and properties worth several millions of naira were lost in the aftermath of the violent protest in Billiri over the selection of a new Mai Tangale.

The protest which was initially peaceful by women turned violent when it was hijacked by irate youths who went on rampage setting buildings on fire, killing three people in the process.

Gombe Governor, Muhammadu Inuwa Yahaya, had to cut short his official engagement in Abuja to rush back to Gombe from where he proceeded to visit Billiri on an on-the-spot assessment of damages caused by the irate youths.

He condemned the destruction and vowed to bring all the perpetrators to book assuring also that government will intervene to support all victims to enable them to start all over again.

While speaking to journalists at the popular Kantoma market which was incinerated by the rampaging protesters, the Governor condemned the dastardly act unleashed by those he described as “criminals and unpatriotic citizens.”

He, however, assured that the government will intervene to ensure those that lost their property are supported, promising that perpetrators of the wanton destruction and their sponsors will be fished out to face the wrath of the law.

Inuwa Yahaya said: “The incident represents a serious threat to peace and stability of Gombe State. Government is still in the selection process of appointing a new Mai but some forces took advantage of the development to cause mayhem just to achieve their personal goal which as you all witnessed today resulted in the loss of lives and property.”

He added that; “We condemn the criminal behaviour and actions committed by those unscrupulous elements and we sympathise with the families of those who lost their lives and property in this unfortunate incident.”

The governor reiterated the 24 hours curfew imposed on the local government area effective last Friday will remain in effect until full normalcy waa restored to enable the government to complete the selection process by announcing a Mai Tangale for the Chiefdom.

The Governor was accompanied on the visit by the Deputy Governor, Dr Manassah Daniel Jatau; Speaker of Gombe State House of Assembly, Abubakar Luggerewo; Majority Leader and some other members of the House.

Also on the entourage was the SSG, Professor Ibrahim Abubakar Njodi; Chief of Staff, Alhaji Abubakar Inuwa Kari; Commissioner of Internal Security, Commissioner of Police, Director SSS among others.

Niger CAN urges members to pray for safe release of kidnapped students, other victims