Though a prince, I sold newspapers on Lagos streets —Olu of Ile-Ogbo 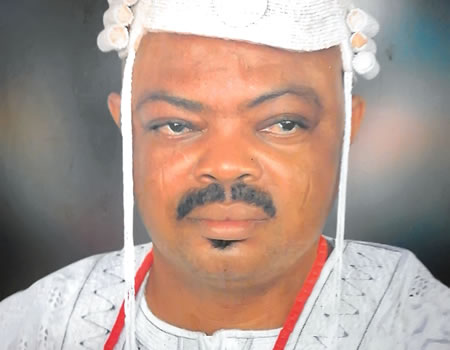 The Olu of Ile-Ogbo, Oba Habeeb Adetoyese Agbaje, popularly called Kadara, went through the rough plain of life before he eventually climbed success ladder to the top. He was once a newspaper vendor in Lagos, moving in the odd hours among other hazards that go with newspaper distribution job. Oba Agbaje spoke with TUNDE BUSARI in his palace during which he made some interesting revelations. Excepts:

Did you see yourself as a future king when you were a kid?

Before I answer your question, I think it is better I state that I was born a prince from Arowookunjoye ruling house. And in Yorubaland, every prince is entitled to the stool. It is not a matter of whether you have interest or you don’t have. It is a matter of right; right to the throne of your forefathers. So, coming back to the question, when I was growing up among my age mates in our community, I used to see myself as one blessed with special quality apart from being a prince. On many occasions, some people I could not recognize would just appear to me in dream and tell me that I would one day wear crown. These people were old, yet they would all show respect to me. What do you think would happen to a little boy seeing that kind of strange thing? I was frightened but I was matured about it. How I did it; how I was able to handle the situation, I cannot even say. I think it was the manifestation of destiny because another person would have been so scared to go to town with it and mess it up. I kept it to myself and moved on.

What other thing can you recollect of your childhood days?

May be it would interest you to know that another important thing that happened to me has to do with the throne I just talked about.

Good. I attended DC Primary School, in Ile-Ogbo here. But at one of the end-of-the-year ceremonies, my teachers picked me to play the role of a king. I did not know how they arrived at that but that was what happened.

Did you play the role or reject it?

How can you describe your interpretation of the role?

I was young then to have a fair assessment of my performance. But I know that people clapped for me during the play and also commended me after. It was that play that gave me the nickname ‘Kadara’ with which many people know me. Another thing about the play was that it made what I saw in my dream to have more meaning to me.

What then happened thereafter?

Thank you. That experience taught me a big lesson. It showed me that I had a bright future but I needed to work very hard to achieve it. So, very early in my life, I became very active in whatever I was asked to do or I did for myself.

Can you expatiate on this?

For example, I became a prominent figure among my fellow students of the former Oyo State College of Education, Ila-Orangun, where I had my NCE (National Certificate of Education).I studied Guidance and Counseling and I was involved in campus politics and students union activities. My colleagues always respected my opinions on important issues and decisions. They always surrounded me.

What do you think really attracted them to you?

I think they saw me as a more matured student, in terms of comportment and presentation. I already had work experience in Lagos before I went to secondary school and NCE. So, I was a bit more matured using that experience.

Which kind of job did you do in Lagos that you later sacrificed for NCE?

Immediately after I completed my school, I left Ile-Ogbo for Lagos. My elder brother was already working in Lagos at Ajegunle. I joined him and started a work. We were into carpentry work and trying to make ends meet until I made up my mind to continue my education. I felt education was important to the bright future I saw.

Which secondary school did you then attend in Lagos?

I did not attend school in Lagos. I returned home and started at Luther King Secondary School, Ile-Ogbo.

You were once a carpenter and I also learnt you were a newspaper vendor. How true is this?

I was a vendor and a successful one for that matter. It is a chapter of my history which I am very proud to talk about. It is history which can be useful to our youths who are behaving as if a millionaire is made overnight. As I was thinking of my future shortly after I had completed my NCE, the thought on my mind was not to teach but to go into business. The picture of the exact business to do did not appear to me until I returned to Lagos and I found out that I could make a difference in selling newspaper. I thought over it and started out as a vendor on the streets. By the time I spent some weeks on the streets, I began to like the job because it gave me opportunity to meet different people. Ikeja, Osodi were my regular areas.

Didn’t you consider your certificate a waste?

I did not see it that way. In fact, my NCE certificate gave me more confidence to relate with my customers. Education is an asset a parent can leave for his children. Along the line, I applied to Concord for the position of distributor, I was shortlisted and given the appointment. I was trying my best to justify my new position and I became popular among vendors. Later I became distributor to The Guardian too. At that time, there was no doubt that I was near the success destination I was going. I showed interest in other businesses like distributorship of cement and also oil and gas. That was my journey from nobody to somebody.

How then did your childhood dream become a reality?

When I got to a stage in life, I knew it was a matter of time the dream would become a reality. I was already doing well in Lagos and was always in the company with big men. So, I believed one day, God’s destiny over me would manifest. I must make it clear that I was not desperate. I don’t believe in a do-or-die approach. I know that whatever God has destined will definitely manifest. But when my predecessor joined our forefathers and the stool was declared vacant. My family rallied round me and the rest is history.

Perhaps, only Ibadan of Yoruba towns hardly witness succession struggle. Why is it so?

It is true that Ibadan has a different selection process but the process also witnessed a challenge this year. Despite that it was quickly resolved. I have said earlier that every prince is entitled to the throne. What then happens under such circumstance when only one will be selected. I think, the issue is part of what makes the stool a position of authority. What is good is naturally attractive to many people including those who are not entitled to have it.

When did you come to the throne?

It was in 2012, a year I call my year of fulfillment. It was year my destiny was fulfilled. The year my childhood dream turned to be truth.

What happened during your coronation?

It was a special day in the history of Ile-Ogbo. The Alaafin of Oyo, Oba Lamidi Adeyemi honoured me with his presence. About four traditional rulers came to represent the Ooni of Ife. We had many other kings in attendance too. I am using this opportunity to thank all those who came to honour me on that day. I felt very happy.

Is the palace a glorified detention as some would say?

I don’t want to see it from that angle. There is no doubt the position takes away from freedom which one enjoyed before becoming the king. But the palace is a place of authority. It is a position of honour and prestige. Seeing older people prostrating and kneeling down before you is a prestige that could not have come even if one is the bread winner of these people.

But government has higher power because traditional ruler receive staff of office from government?

It is true but to some extent traditional rulers still maintain their respect. Don’t forget the position is not terminal unlike government officials who are in office only for a certain period of time.

When okrika bras and pants become toast of buyers