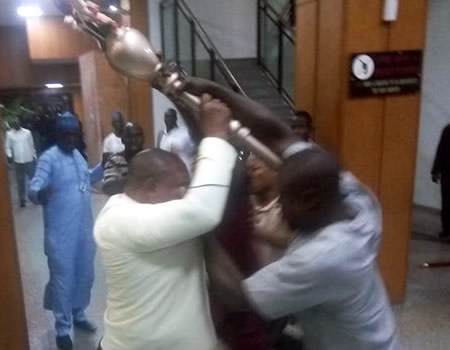 Omo-Agege, a lawyer, politician, administrator and business mogul, is the Chairman/CEO of TechSprings Ltd, a dredging and oil services corporation based in Port Harcourt, Rivers State.

The embattled senator was a leading governorship aspirant for the Peoples Democratic Party in the 2007 and 2011.

Born on August 3, 1963, to Justice James Omo-Agege, Omo-Agege studied Law at the University of Benin and was called to the Nigerian Bar as a Solicitor and Advocate of the Supreme Court of Nigeria in 1986 after completing the professional training program at the Nigerian Law School, Lagos.

Upon completion of his National Youth Service Corps (NYSC) with the Directorate of Criminal Investigation and Intelligence of the Kwara State Command of the Nigerian Police Force in 1987, Omo-Agege commenced his legal career with PAT OKUPA & CO, Law firm, where he cut his legal teeth as a litigator in private practice.

In 1989, he moved to Lagos and co-founded Agege & Co, a private practice with emphasis on Corporate Banking and Commercial Litigation matters, as a principal partner.

Omo-Agege, in 1990, thereafter, moved to the United States of America (USA) and became a foreign associate in the law office of Charles O. Agege in Los Angeles, California, where he counseled foreign clients on Nigeria Law and prepared litigation strategies and extensive motions and discoveries in matters involving personal injury, breach of contract, fraud, securities, real estate, banking, letters of credit and other financial instruments.

He founded Agege & Associates in 1992 and became the Senior Partner of the firm. By 1996, Agege & Associates merged into a partnership called AGEGE & ESIN and extended its scope of activities to include international wire transfers, insurance, professional malpractice, suits against foreign entities under the Foreign Sovereign Immunity Act (FSIA) and Domestic International Commercial arbitration, admiralty and marine litigation practices, and extensive criminal defense litigation.

Omo-Agege enrolled as a student in the post-graduate law degree program at Tulane University Law School, New Orleans and obtained the LLM (Masters of Law) degree with distinction in 2002.

A native of Orogun in Ughelli North Local Government Area, Ovie Omo Agege began his political career when he returned from the United States of America and contested the PDP’s primaries of the Ughelli Federal Constituency for the House of Representatives in 2002 which he lost.

He was appointed as the first Executive Assistant to the Governor of Delta State, Chief James Onanefe Ibori in 2003 with responsibility for the formulation, implementation, coordination of government policy, monitoring and appraisal of Executive Council decisions to ensure compliance with administration set goals, pre-qualification of and monitoring of state project vendors.

He also acted as the Chief Liaison Officer, PDP National/Headquarters and Presidency relations, a position which enabled him to develop a network of contacts and friendship across Nigeria.

Two years later, Gov Ibori elevated him to the State Executive Council as Commissioner for Special Duties and gave him additional responsibility to oversee the privatization program of the state government thereby supervising the privatization of African Timber and Plywood in Sapele.

Ekiti 2018: I offer to stay away from primaries for peace ―Fayose