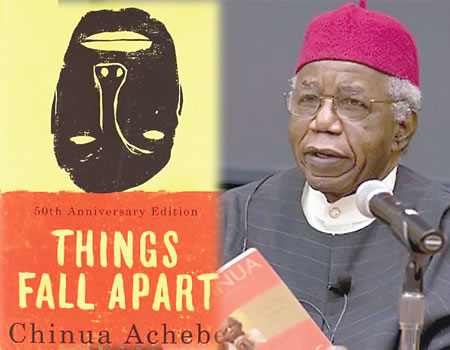 The global celebration of the Diamond Jubilee of the late Professor Chinua Achebe’s Things Fall Apart has commenced with activities planned for five Nigerian cities and 10 African countries.

SHAKESPEARE has been dead for over 100 years but he’s still celebrated in the UK. In fact, there’s a thriving tourism industry around him. If you go to his birthplace, Warwickshire, day and night, you will find tourists there. If that can be done for him, what stops us from doing same for Achebe and other literary icons,” Chair, Local Organising Committee of the Things Fall Apart @ 60 celebrations in Nigeria, Dr. Wale Okediran, began at a news briefing last week in Lagos.

Okediran, who was unveiling plans for the Diamond Jubilee of the novel that has been translated into over 45 languages, was responding to a question on why 10 years after a five-city tour of Nigeria in commemoration of its Golden Jubilee, the drums, were being rolled out again.

He continued: “Some people have asked, ‘Why are we still doing this?’ The fact is that we want to keep the literary flame aglow. We want to show that literature equally matters. Life is not just about politics. It is as important as the economy or cattle colony. We don’t want them to submerge us.

“So, in the Achebe celebration, literature is the focus. We are celebrating Achebe because of the impact he made on the development of African literature and beyond. We want to show others that if you do your work well as a writer, literature will outlive you. Of course, there is also the need to make the point that even if politics and religion are dividing us, literature is uniting us.”

Fittingly, the African leg of the global celebration being spearheaded by the Christie and Chinua Achebe Foundation is not happening only in Nigeria this time; 10 other African countries are also celebrating the novel first published in 1958 by William Heinemann Ltd in the UK. Ghana, Ivory Coast, South Africa, Sierra Leone, Uganda, Kenya, Liberia, Tanzania, Togo and Cameroon, all have activities lined up between February and December 2018.

Giving a breakdown of the activities happening in Nigeria, the head of a five-person organising committee, disclosed that the celebration was themed: Things Fall Apart: 60 years on and will take place in five cities. These are Lagos, Ibadan, Abuja, Sokoto and the University of Nigeria, Nsukka, for the grand finale.

Symposia, children’s carnival, writing competition, stage presentations of Things Fall Apart and a grand finale with a night of tributes are some of the key events taking place. He further explained that the colloquium would take place in the five Nigerian cities and 10 African countries.

“Apart from foreign writers and scholars, notable African based writers and scholars will also be invited to present papers and talks,” Okediran said, adding that copies of Things Fall Apart would be provided for pupils participating in the literary competition.

“The competition will be organised with the provision of copies of Things Fall Apart for the students to read for one month before the day. The competition will involve a quiz, reading comprehension and one-act dramatic enactment of any part of the book by participating schools.”

He explained that in Nigeria, collaborations would be done with the Association of Nigerian Authors at the national level and through its local branches where the events are billed to hold as well as tertiary institutions.

On preparations in other African countries, Okediran said: “Reactions from the African countries have been very encouraging. They even want to outdo one another. It is the first time we are taking the celebration out of Nigeria.” He added that Fellows of the Ebedi Residency scattered around the continent had been helpful in the preparations.

For the international conference, he invited abstracts for 15-20-minute presentations and explained that it would be a platform for students, writers, scholars, literary critics and other interested parties to engage, rethink and propose possible new directions for African literature after 60 years of Things Fall Apart.

What the colour of your tie says about you