They ran from poverty to Lagos then, they became homeless

Features
By AKINWALE ABOLUWADE On Sep 7, 2019 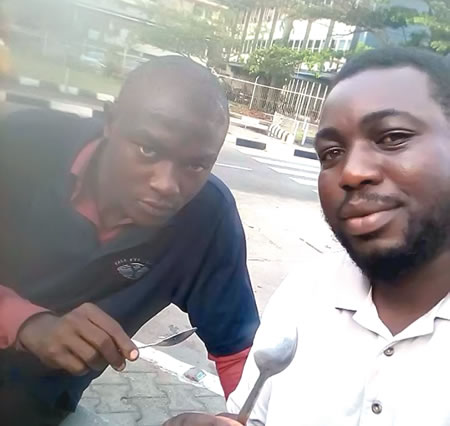 Fed up with life and living in their various communities, many people fled to Lagos in search of greener pasture. AKINWALE ABOLUWADE reports that having been confronted with realities of survival in the city, some of those who came to explore opportunities in Lagos are stuck between staying back to live in destitution and returning to humble living back in their communities.

Several years ago, when confronted with challenges and things turned bad for Jonathan Olanlokun, he girded his loins with courage and resolved to fight hard to recover the lost grounds. As a well-trained craftsman who specialises in the construction of aluminum windows and doors, he had hope that after his business had failed, things would take shape again for him soon. However, things did not work in his favour as envisaged. After some years of struggle for survival without making a headway at his base in Osogbo, the young artisan left for Lagos in search of greener pasture.

In Lagos, reality soon dawned on him as hope of hitting the goldmine failed. Yet, he decided to persevere. Now, having gained some balance, he recalled how he toiled and battled for survival in Lagos slums, under the bridge and on the streets without a good result. Amongst hundreds of people living in despair who came to Lagos without having any hope or means of survival, “I am glad that I am among the very few people who managed to survive the harsh realities of life in Lagos,” he told Saturday Tribune.

According to him, many people are in Lagos without having any hope, shelter or job to do for survival. As someone who had had a bitter experience as a result of such decision, he said that he knows where the shoes pinch others who relocated to Lagos amid hopelessness. For this reason, Olanlokun said that he vowed to help the destitute persons who sleep under bridges, slums and shanties without hope of survival by connecting them back to their kinsmen using his meagre resources.

A female septuagenarian popularly called Mama Toyin and two young men simply called Nelson and Omotayo were among the folks that Olanlokun met in destitution at different times in Lagos whom he helped to reunite with their roots.

It was by sheer providence that Olanlokun met 72-year-old Mama Toyin on Lagos street sometimes in 2017. And, touched by an air of humanity, he was moved to help the old woman when life became unbearable for her in the course of her struggle for survival. Mama Toyin, who reportedly left her community in Ogun State in a controversial circumstance for Onikan area of Lagos, took to hawking of bottled water, soft drinks and sachet water weeks after her arrival in the city.

At some point, she grew weary of toils and trouble. Instead of hawking around, she decided to sit near a food canteen to sell her wares. But, by mid- August when he visited the woman, he found her lying sick with her legs swollen. Olanlokun said: “I had seen a whole lot of examples in the course of my engagement in social work and humanitarian services in Osogbo for some years before my arrival in Lagos. Mama Toyin was hawking around. At a time she stopped hawking and sat at a food canteen to sell sachet water to those buying food at the canteen. Mid-August, I visited Lagos Island after three months to find her lying helpless and sick. Her legs were swollen; her eyes were white and she could neither walk well nor eat conveniently.”

The fact that her cellphone was stolen by thieves in her make-shift shelter close to the Atlantic Ocean and the Lagos Lagoon increased her woes. At the time when she took ill, Mama Toyin was left with no money that she could use for her treatment. She was all alone and left to her fate like a destitute without any family members.

Besides that, it was difficult to re-unite the old woman with her family members because she was initially unwilling to disclose the information about her people and where she came from. When she eventually did, she disclosed that she was from Ogunrun Eletu Mowe community in Ogun State but she could not go back home since she had no money.

The journey from Onikan community where she resides to Ogunrun Eletu Mowe in Ogun State is about two hours. On the day she was taken home, expectation was high that her kinsmen would be happy to receive her having left home for about two years.

Also, a 17-year-old boy called Omotayo allegedly ran from home in 2016. The young boy took shelter at Elegushi Beach area in Lagos. Findings show that he eventually took to drinking and smoking. It was also gathered that he engaged in odd jobs for survival. Beyond his gentle appearance, Omotayo reportedly took to the lifestyle being introduced to by a company of youngsters.

In his own case, Nelson arrived in Lagos from Calabar in an unusual circumstance three and half years ago. As an aspiring hip hop singer, his aim of coming to Lagos was to make his musical dream come to reality. He has since been living under the bridge at a place called ‘outer Marina’ on the Lagos Island since 2016. He was a very easy-going person but had rough experience as he had no job and no helping hand.

It was learnt that Nelson was down with mental illness at some point sometimes in October 2017. Available sources said that a church in the area made efforts to rehabilitate him and to give him a lease of life. “When I learnt about his case, I made efforts to connect him back to his family. It was difficult as I needed information on how to locate his family. At some point, I asked for his Facebook account to see if we would be able to establish a link to someone who knew him. The result was amazing as I was able to send a message to someone who eventually helped me to locate Sophie, his family member. Sophie called me and without wasting time, she reached me and we linked them together. Upon seeing Nelson, Sophie bust into tears saying that they (family members) had searched everywhere for him. I felt so fulfilled because my effort yielded a good result.

“For me, this is my calling and I would be able to do more to unite destitute persons in Lagos back to their family members. There is a lot to do in this regard and with support from credible organisations, I shall be able to do quite a lot in the area of personal social impact works. As I said earlier, I was engaging in social work while I was in Osogbo when I found the Barbara Abike Epperson Foundation, a non-profit making organisation in memory of late Miss Barbara Epperson, my American foster grandmother.

“It saddens me to say that there is a huge gap to be filled by humanitarians and other change agents in the society. These gaps are left unfilled and that is the reason why the society is in shambles,” he lamented.

Giving his opinion on why many people jostle to seek greener pasture in Lagos, Mr Charles Adebiyi, a Lagos resident, said: “Many people rush down to Lagos because they hold the belief that Lagos is the place where everything happens.”

In 2016, the National Population Commission (NPC) put the population of Lagos State at 21million while the former governor of the state, Akinwumi Ambode, said an estimated 123,000 people migrate to the city daily.

The latest experience that confirms the level of attraction to Lagos was the news that revealed that about 123 northerners from Jigawa State arrived in Lagos on board a trailer stocked with motorcycles. Mr Adebiyi said that in a country where there is insecurity, the arrival of the young  northerners left fears in the minds of residents. And, in view of the economic challenges in the country, he said that the tendency is that people would be easily attracted to cities because of the prosperity and opportunities that are assumed to be available.

‘Instead of me to enter street dey do prostitution, make I use the Keke take console myself’