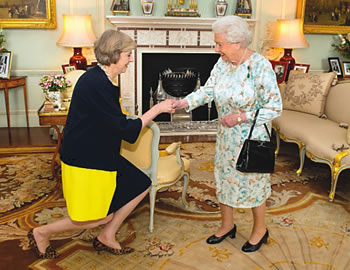 Former Home Secretary, Theresa May has become the new Prime Minster of the United Kingdom.

Theresa May was asked to form a government by the Queen of England, following the resignation of David Cameron after the UK’s vote to leave the European Union.

Standing in front of 10 Downing Street, Theresa May addressed the cameras for the first time as prime minister just a few moments ago. With her husband Philip by her side, she said the Queen had asked her to form a government “and I accepted.”

The 59-year-old politician paid tribute to her predecessor, David Cameron, who resigned earlier today, saying: “I follow in the footsteps of a great modern prime minister” and praising his work for social justice, CNN reported.

May pointed out that the official name of her party is the Conservative and Unionist Party “and that word, ‘unionist’ is very important to me.”

She spoke of the “precious, precious bond” between England, Scotland, Wales and Northern Ireland.

Echoing a speech she made earlier in the week, before the leadership contest came to an abrupt halt, she pledged to “make Britain a country that works for everyone.”

Addressing those who feel they are “just managing” to get by, she said: “I know you’re working around the clock. I know you’re doing your best. And I know that sometimes life can be a struggle … We will do everything we can to give you more control over your lives.”

She said her government — as yet unannounced — would “Listen not to the mighty, but you … Prioritise not the wealthy, but you.”

May wrapped up her first address to the nation saying that Britain “face(s) a time of great national change … we will rise to the challenge.