Theresa May, Andrea Leadsom battle to be next British PM 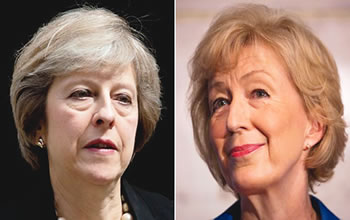 Theresa May and Andrea Leadsom will battle it out to become the next leader of the Conservative Party after Michael Gove was eliminated from the contest.

Conservative members will now decide the winning candidate, with the result due on 9 September.

The winner will become the UK’s second female prime minister.

Mr Cameron resigned after finishing on the losing side in the UK’s EU referendum, in which there there was a vote to leave.

The results were announced at Westminster by Conservative MP Graham Brady, the chairman of the backbench 1922 Committee.

There had originally been five contenders to succeed Mr Cameron, with MPs voting in two rounds to get that number down to two.

The contest now moves to its final stage with the Conservative Party’s 150,000-strong membership deciding between Mrs May, a Remain campaigner with a long track record in government, and Mrs Leadsom, a leading light of the Brexit campaign who has stressed her City and business background.

Speaking after the results were announced, Mrs May said she had secured support from all wings of the Conservative Party and promised to bring the Tories together.

She promised “strong, proven leadership” to negotiate the UK’s departure from the EU, and to “make Britain a country that works not for a privileged few but for every one of us”.

Conservative MP Tim Loughton, Mrs Leadsom’s campaign manager, said she would bring a “huge and fresh skills base” to Downing Street if elected.

He played down her lack of cabinet experience, saying she would have “no problem stepping up to the job” having had a long career outside politics, adding: “She has done things outside of this place on so many different levels.”

Mr Gove said he was “naturally disappointed” not to have made it to the final two, describing the remaining contenders as “formidable politicians”.

He welcomed the fact that the UK would be getting a second female prime minister – after Margaret Thatcher – and called for a “civilised, inclusive, positive and optimistic debate”.

Anyone wanting to vote has to have been a member of the Conservative Party for at least three months.

UAE asked me to spy on Britain ―Matthew Hedges

British politician kills self over claims of sexual misconduct