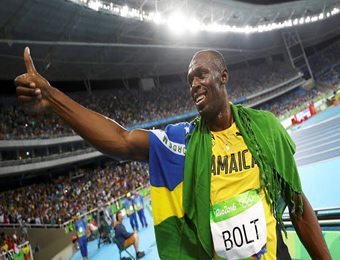 The word “impossible” does not exist in the Word of world’s fastest man, Jamaican Usain Bolt.

“I have a saying: `Nothing is impossible’. I never set limits for myself. I’ve always wanted to push the barriers and that’s what I did,’’ Bolt said at a post 4X100m news conference, after anchoring to take the event’s gold.

“I accomplished what I wanted to and it’s a joy. I’m happy. There’s nothing else I can do but to push on and enjoy what I’ve done over the years.

“I’m a great ambassador. I try to live up to my country’s needs, and I always try to push my country on top and be the best I can be.

“I’ve brought more tourists to my country, more jobs. I’ve done as much as I possibly can for my country and will continue to do so after I retire from the sport.

“I will continue to uplift my country,’’ he said, hinting of retirement from the Olympic Games, where he ensured a hat trick in his Olympic outing, where he won three gold in each of the Games from 2008 Beijing, London 2012 and Rio 2016.

According to him, it’s very hard to come into the Olympics and win three medals, no matter what colour they are.

“It’s the highest level of competition. People work really hard to come here and push you to your limits,” he said about Canadian Andre De Grasse.

“He has proved that he will be a force to be reckoned with in the coming years in the world championships and the Olympics.

“I’m happy that I get to see him compete, between him and my compatriot, Yohan Blake and everybody else.”

On the Japanese that placed second in the 4×100 metres, he said: “From Aug. 18, I saw them in the heats and I could tell they will be a team to be reckoned with.

“I’ve known them for years, I’ve seen them compete. I know their execution in the baton changes is always extremely good, and you can tell they practice a lot.

“I must give it up to them for the work that they’ve put in to compete with the top countries and come away with the silver medal.”

On what is next on his bucket list: “I will have to make a new bucket list. I have accomplished what I wanted to accomplish in track and field.

“So, now I will have to make new goals and then I will take that on. But now I just want to relax and take a vacation’’.

“I have proved it over and over again that I have done it clean, so it’s no stress. It’s not what I want but it’s life. What are you going to do? It’s not something I have control over.”

On whether he will finish the season: “Well I don’t know. My coach will decide. My agent just said that’s it for the season. So I guess that’s it.’’

On what it will be like returning to Jamaican capital Kingston: “I’m sure I will get a lot of love and so will these guys. Jamaicans show a lot of love when you do well for their country.”

On Jamaican athletics: “We have been through some rough patches, but I think we are on the right track with the youngsters that we have.

“My fellow Jamaicans, we’ve proven over the years that we can do it and we will continue pushing on and doing great things.

“But I feel like we’re on the right track, the bad times are behind us.

“We just put the bad times behind us and move forward, but I think we`re going in the right direction’’.

He again hailed the Japanese athletes, who failed to qualify in the individual event but made it to the second position the relay.

“Just team work. I think as they said earlier as I heard they’ve been practising since March; that’s a lot of practise compared to what we have done.

“Over the years we’ve noticed that China and Japan, these guys have always had good baton changes.

“I remember running in the finals. They always show up and do extremely well because they’re disciplined when it comes to running the relays and they trust their teammates.

“Hats off to them for going out there and executing well and getting the silver medal.”

On his impending retirement: “I knew it was going to be done. I just have mixed feelings now.

“It’s a relief. Having all this pressure to continue coming to the Olympics and achieve gold medals back to back all the time is a lot of pressure.

“I’ve gone through a lot of stress, but I will definitely miss the sport and miss the Olympics.

“It’s the biggest stage for us athletes, but I’ve done all I can do. I’ve proved to the world that I’m the greatest in the sport so for me it’s just mission accomplished pretty much.’’

His teammate Asafa Powel, part of the relay quartet in 4x100m gold said of pre-games’ practice:

“Not much. I think Usain did one session and the rest of us did two sessions for the entire year. That’s it. Just here, when we go to Brazil. We did two (or) one.’’

On why the U.S., men’s team had trouble getting the baton: “I think they’re more focused on beating us than actually running a proper race. It’s the pressure of trying to beat the Jamaicans.”

Ryota Yamagata of Japan, that took home the silver, on how much practice they have had before the Games: “We’ve been practising the baton since March this year.

“We’ve been practising all the time for about six months. That’s why we’ve done a pretty good job with the baton.’’

“It was a very fast time to get a silver medal. This was the best record for Team Japan. It’s a real honour to be part of the final, racing against the others.’’

Aska Cambridge also of Japan added on how he feels competing for Japan, when he was born in Jamaica:

“I know I was born in Jamaica. My dad was Jamaican. But I was brought up in Japan.

“I’ve been training in Japan. I’m really proud to be part of the Japanese team and to win silver.”

Gbaramatu: Ijaws cry out over alleged bombardment of communities by soldiers

Economy: Buhari is focused, be patient, all will be well, Akiolu tells Nigerians