The wasting fruits of Benue

Agriculture
By Johnson Babajide On May 12, 2020 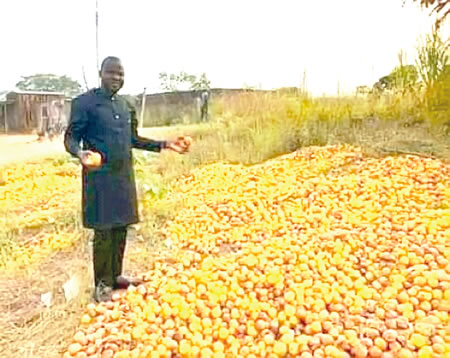 Benue State grows fruits in abundance but the non-availability of processing companies and poor patronage due to Boko Haram attacks have turned fruit farmers, who should be swimming in money, into the of pittance. Johnson Babajide reports.

From time, Benue has maintained its prominence of being the food basket of the nation. It simply implies that the state is blessed with arable farmland. Aside this, it also plays host to the second largest river in the country, River Benue as well as other streams that run throughout the year, thereby providing accessible irrigation for farming all year round.

As an agrarian state with comparative advantage in food and horticultural crops, if adequately tapped, Benue State can comfortably feed the country and even beyond. This, obviously, earned the state the title of “The food basket of the nation.”

The state has comparative advantage of food and horticultural crops. Among the food crops that are grown in commercial value in the state are: rice, yam and cassava. In horticulture, the state boasts of fruits such as oranges, mangoes, guava and pear. Sadly, for farmers in fruits, it has been one long battle with wastage as the state has almost nil outfits to process these fruits harvested in large quantities.

Nigerian Tribune’s visit to Ushongo, Vandeikiya, Konshisha and Gwer East local government areas of the state during the harvesting season elicited pity as farmers counted their losses. The fruits which are perishable are left to waste as a result of lack of processing outfits. For instance, a media practitioner in the state, Henry Iorkase, who also has an orange farm in Buruku Local Government Area of the state, lamented that all his investment no longer yields profit due to low patronage.

According to him, “since the advent of Boko Haram insurgency in the northern part of the country, there is no longer market for orange in the state. You know that this type of fruit is perishable; we no longer have people to buy this fruit anymore. I have over 1,000 stands of orange in my farm; they have started to decay since there is no patronage. Unfortunately, we don’t have those cottage industries in the state to process these fruits. Farmers are losing a lot.”

When asked to quantify the amount he has lost since the market for orange nosedived, Lorkase said that he has lost several millions of naira.

Another farmer who identified himself as Donald, decried the loss fruits farmers record every year due to poor market for their produce and non-availability of fruit processing companies in the state.

According to him, “a visit to Vandeikiya, Konshisha and Ushongo during the orange season will help one to really understand our suffering. As I discuss with you, I have about 5,000 stands of oranges which by all standards should have made me comfortable in life. With the number of stands, I am supposed to be raking in about N10m yearly if we had factories processing this fruit.

“Pay us a visit during the season, you will pity us. Do you know that we beg people to buy a big sack containing about 1000 oranges for a paltry sum of N500? We know that if we refuse to sell, they will waste away. Many of our politicians realised that our major problem had always been seeing those fruits rot away and they would promise to bring in investors to establish factories to process these fruits to fetch us money but as soon as they get elected, you would hardly find them around to take them up on their promises.”

The state chairman of All Farmers Association of Nigeria (AFAN), Aondongu Saaku, lamented the losses being recorded by commodity farmers in the state. According to him, fruits farmers lose an average of N5 billion yearly due to the inability to process the harvested mangoes, oranges and other fruits in the state.

The AFAN chairman said that the state produces fruits in commercial quantities and stressed that the establishment of processing industries in the state was the only way for farmers to get enough profit from their investment.

“The main problem for our commodity farmers in the state is lack of market for those fruits and there is no industry to process these fruits. Before now, we used to move these fruits to states like Lagos, Rivers and Kano but with the situation in the country, movement of these fruits has been hampered, no market and no processors, so the fruits are wasting away.

“Benue State is blessed with a variety of fruits such as oranges, mangoes, guava and pear. For orange, over 10,000 farmers are into orange production with some of them having plantations of over 20,000 stands of oranges. You can verify this in Ushongo, Vandeikiya and Konshisha local government areas.

“It is the same story when it comes to mango; we have both local and improved species of mangoes in the state. Mango in Benue State is like palm trees in the eastern part of the country. We also have cashew, pear and palm trees and even kolanuts in Kwande Local Government Area of the state,” he said.

Saaku, however, exonerated the government from the amount of fruits that get wasted in the state, saying “it is not government that does all these things; it is the people. Until our people have a change of mind by not relying on government alone, there will be no solution to the problem. You know that government is not business-oriented. The problems are individuals who are not ready to invest their money in the business of processing these fruits.

“Our people in this part of the country do not have the culture of opening up such businesses where our youths can be gainfully employed. It is very unfortunate that with these abundant resources our farmers who ought to be making good money from fruit lose over N5 billion every year.”

Meanwhile, the aforementioned challenges being confronted by fruits farmers in the state can become a thing of the past if things are put in the right perspective.

Former president of Nigeria, Chief Olusegun Obasanjo, who had gone into mango plantation in Howe, Gwer East Local Government Area of the state, said that the plantation would produce and process finished products such as juice from assorted fruits and oil from the seeds that could be used by pharmaceutical companies among others.

Obasanjo, who said that the factory when completed would employ over 1,000 workers mainly from the host community, however, noted that mangoes would be produced between three to four years’ time, while hinting that about 140 hectares of land for the plantation of mangoes are presently being cultivated.

He said that oranges, mangoes and other fruits produced by farmers in the state would not be enough to run the factories, hence the need for the plantation.