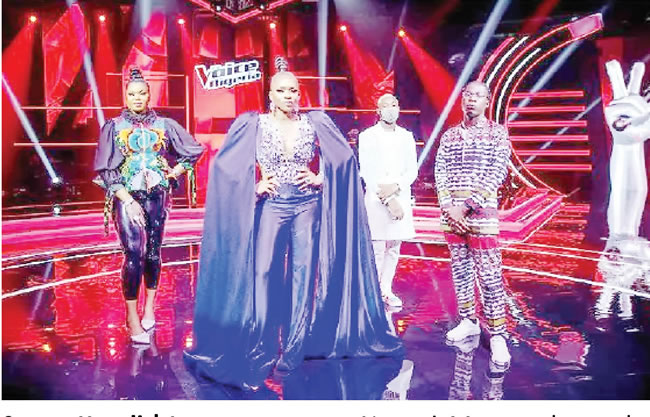 Celebrity Coach, Waje’s team member, Nuel Ayo, has been saved for the second time in a row by viewers of The Voice Nigeria season three as Inioluwa, Tamara, Jeremiah and Toeseene ended their journey on the show.

Four talents, Nuel Ayo from Team Waje, Kpee from Team Darey, Anu from Team Yemi Alade, and Dapo from Team Falz, returned to the live show after the public voted them back into the show.

Week 16 kicked off with performances by the two talents in Team Yemi Alade, Kitay, who sang Flavour’s Ada Ada, and Anu, who sang The Greatest Showman’s ‘This is me’.

Talents on Team Waje, Eaziee left Goosebumps on coaches as she gave a sterling performance with her rendition of Foreigner’s ‘I want to know what love is’ while Nuel Ayo gave a wonderful cover of Asa’s hit single, ‘Eye Adaba’.

Team Darey members, Esther and Kpee rounded off the list of performances. Esther blew coaches away with her command performance when she rendered The Greatest Showman’s ‘Never enough.’

Already, the voting lines have been thrown open and as voting ends on Thursday, Eaziee, Nuel Ayo, Kpee, Esther, Naomi Mac, Dapo, Anu, and Kitay will be relying on public votes to remain in the competition.

The show which is proudly sponsored by FirstBank, Baba Ijebu, and produced by Un1ty, further showcases the bank’s role-through partnership–in enabling Nigerians by passionately empowering and investing in youths while giving voice to everyone.