Entertainment
By Favour Boluwade On Nov 21, 2020 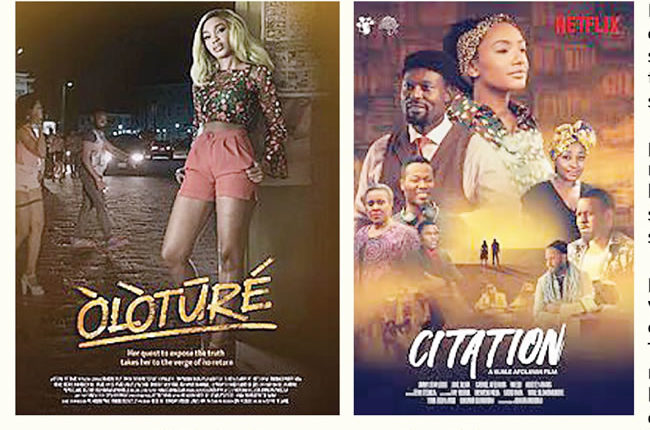 Before proceeding into that, do you know since OLOTURE started to stream on Netflix it has become one of the most discussed movies of the year so far, just like CITATION, which is another Nollywood movie on Netflix?  This review will be concise, interesting and revealing, so get a bowl of popcorn and get to know the meeting point of these two trending movies.

Back to the opening scene of OLOTURE, I had mentioned it revealed the ripping of identity. Did you see the wigs and the foreign hairstyles they had on?  To me, the opening scene was all that was needed to explain that these ladies, who would later be revealed as sex workers in modern slavery were ladies who lost their ways, who wanted a good life, wanted to feel alive, needed to make ends meet and needed to survive in their country.

The opening scene of CITATION revealed a hairdo that was so African; an afro hair, and that would later accentuate the character of the lady who went out of her way to reveal the monstrous lecturer who wanted to sleep with her for marks, a popular repertoire of the SexForMarks report that exposed how lecturers asked their female students for sex in exchange for good marks in Nigerian universities.

The endurance of the lead character in CITATION, which is not different from the actual meaning of the Idoma named OLOTURE meaning ‘Endurance’, would not go unnoticed.

The former shows how a postgraduate student endured the sexual tensions and advances from her supposedly saint-looking lecturer in the university, and the latter, an enduring undercover journalist who had to live through the realities of a brothel to tell the stories of sexual slavery.

A number of people have said the movies are two different ones, but here I can tell you they both scream a lot of the same factors; disturbing and affecting the female gender more.

Leave the sexual slavery aside, there is slavery of a country where her citizens cannot have justice for all the ills going on. How did the police get so late to help Ehi (Omoture), the undercover journalist out of her travail before being taken to Europe despite the efforts she pulled not to become a Forza Speciale?

How did the border get so porous, how did bribery become so norm?  Both have shown that bribery has come to stay in this part of the world.

In CITATION, when it was time to be a witness for Moremi- the protagonist,  two sides of the coin started showing; where some had to speak for the lecturer even when they knew he was lying. There goes the same narrative in OLOTURE where it was obvious it took a lot of paid money to run the crime syndicate, a sex circle and human trafficking ring without interference.

Both show how gender based violence is almost becoming the norm in the society – where a woman is maltreated emotionally, physically, financially, in the face of her womanhood.

The movies show the strength of an African woman; the pride in her womanhood when she is stripped of all that makes her foreign and lost. You would notice that there and then in the brothel ,  the undercover lady and her friend would talk about their fears, feelings, how to make their family fine, just showing their humanity,  once they are off the wigs and the makeup and the ‘office’ – the hotels and the road side.

Let’s talk about the costume. If you would love to see aesthetics at its peak, both movies though different are still also similar.

African materials were highlighted in CITATION.  The costumier had selected diverse attires hence, making CITATION portray our dressing culture well; the beads, the scarves, the patterns, the hairstyles and the accessories did all that.

There is a favourite icing on the berg. I call it the wonders of silence of the casts. I know some people asked why Beverly Osu was in OLOTURE but had nothing to say, why the witness in Senegal didn’t say anything too until Moremi had to bring him out of the shell, or why the small boy who took Moremi to the cliff in the movie was silent.

With Beverly Osu, we expected her to say something right? Her identity is a popular one, we anticipated her speech and sentences but she only acted non-verbal.

Sometimes, the most -expected miracle or action we want would not come from one who seems powerful. Take it to OLOTURE, Ehi’s partner at work; a fellow journalist had the power to take the case to the police but nothing came out of the power, it upset viewers to realise that the undercover journalist would or could be lost forever. There was a battered justice system.

The silence in CITATION led Moremi to discover another truth about the justice system; that many people who could have spoken up and out are left till the truth becomes debris, if they have no one to push it out for them. Until she made a move to fight the powers; including her guilty lecturer, the silence was meant to almost go on forever.

The soundtracks are delightsome, the cinematography, excellent; use of language, exceptional and interpretation of roles, beguiling.

There were forgivable unanswered questions and dialogues though; no movie is perfect. There is still an unanswered question from a friend:  “How did Moremi in CITATION get the money to Senegal and enough for a flight ticket for her witness to be brought down to Nigeria? Was she Otedola in the movie or a postgraduate student?”

The answer could be that in the face of a fight that would clear your name from the mud, you might realise that money would not be a problem; you just have to find it.

Mo Abudu and Kunle Afolayan have helped tell stories of our realities in an entertaining, captivating and relatable ways.