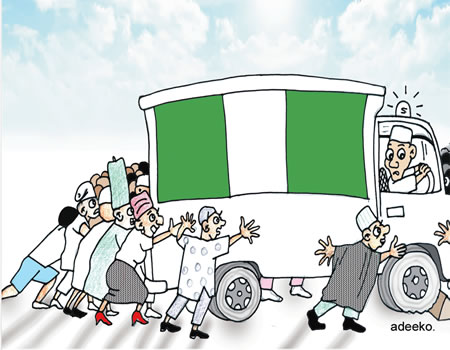 alas! We entered a season of social anomie. The sacred political and public offices which call for sacrifice and commitment have now become the sole source of wealth for the few that have been invested with democratic trust. In fact, it is in Nigeria that those who have no work enter into politics, and rise to determine the fate of all!The corruption news emanating from public office holders and politicians these days have been so mind numbing and so brazen that we should all tremble at the consequences and impact on social life, especially for the Nigerian youths. Of course, the one message the looters are sending out, loud and clear, is that it pays to steal. Let all other society-enhancing values be damned! You should therefore not wonder why, in Nigeria, professionals with all the paraphernalia of success would throw themselves into the ocean in apparent frustration with a system that makes life worthless in spite of wealth. Tertiary education in Nigeria no longer guarantees employment. Criminality has increased. Impunity has become the new normal.

The talk of impunity raises the specter of Boko Haram insurgency and the Fulani herdsmen menace incidence afresh for all those who care about this nation. It beats the imagination why a simple policy initiative concerning the nomadism and cattle ranching elude the Nigerian leadership. Why play politics with the countless lives that the herdsmen issue had taken away since it began? Why is it difficult to make the herdsmen menace a national emergency that requires urgent solution, rather than making it a matter of mere political rhetoric? Thousands of Nigerian lives have been lost to the Boko Haram insurgency, and yet we still have not got it right. The horrific and deadly strikes of these insurgents on a regular basis belie the official rhetoric of military victory. The Dapchi Girls abduction was shameful reference to Nigeria’s lack of a military early warning system. That this followed after the global outcry that attended the Chibokgirls incidence makes it even very worse for the Nigerian leadership. How is it possible to logistically abduct the number of hapless Chibok and Dapchi girls without the Nigerian state being aware?

When Chief OlusegunObasanjo thundered into the public sphere and national consciousness with the stinging and blistering letter to President MuhammaduBuhari in January, it was just his political and global weight that accentuated the weight of what all Nigerians have been debating and talking about on social media, bars, living rooms, beer parlors, seminars, and even at bus stops. The Yoruba adage Obasanjo commenced his letter with is so poignant as an unfortunate summary of what this article intends as the terrible state of Nigeria. For the Yoruba, as long as there are lice on the cloth, then blood will always smear the fingernail. The bloodof thousands of Nigerians derived from the leadership’s unwillingness to deal with the blood-sucking political lice and cabals that are daily dealing Nigeria death blows in all sectors of Nigerian national life. For the sake of unconscionable politicking, we continue to sacrifice Nigerians to the greedy proclivities of the few. The OBJ Letter contains nothing that we do not all knowbefore now, but it is also a wakeup call.

Where do we go from here? It would have been less acrimonious if the government has accepted the OBJ Letter as a challenge that calls on the administration to do more, and to increase the commitment to national performance for good governance, for security, for anti-corruption, and so on. It would have been worthwhile if the government would open up a public discourse on what has been done and what remained to be done in response to the imperatives of the social contract in the lives of Nigerians. How, for instance, can the Nigerian foreign reserve which peaked at $40b be translated into the empowerment of an average Nigerians who lives daily with the expectation of a party coming up nearby where he or she could attend for a free meal, perhaps the only meal of the day? In what ways can a fallen inflation rate be felt in the market by those who find it difficult to buy even staples like rice and gaari? How can we transform the lives of those who have been displaced from their homes in Maiduguri and everywhere that the Boko Haram insurgents have ransacked? How can the emergence of the Nigerian Stock Exchange as one of the best performing in the world help us reduce raging poverty?

The OBJ letter has only one implication, as far as I am concerned: It calls us all, government and governed, to ask the critical question—where do we go from here? If we take its import in an antagonistic sense, then we lose the kind of collaborative patriotism that ought to be at play between the various strata of leadership in Nigeria; between statesmen, and activists, and agencies and people. In a democracy, we all have the right to participate in the molding of our collective destiny. It is however the responsibility of the political leadership to articulate and process our collective aspiration and run with it.

Executive Order 10: A step in the right direction