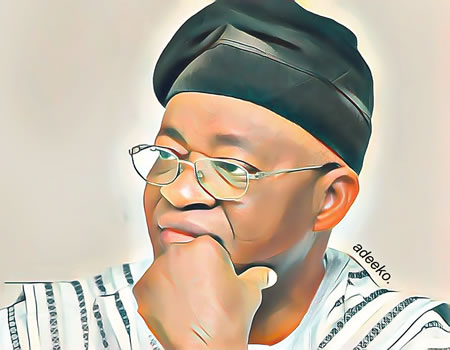 ON Tuesday, September 29, 2020, is the 66 th birthday of my Principal, Adegboyega Oyetola. To celebrate him, I have elected to speak about a few of his attributes as a leader. Interestingly, those attributes, one of which is the fact that running a State in a depressed economy is possible, have not only changed my perception about taking up the job of a media aide to a complete stranger, but have further rekindled my hope about the future of our State and the country at large.  I have said it before, but let me say for the umpteenth time that prior to my appointment in August last year, there was no prior relationship between my boss and me. I saw him for the first time in my life two weeks before I was appointed his Chief Press Secretary, CPS. On the first day of our meeting, which was with the outgoing CPS, a pleasant senior in the journalism profession and current editor of The Nation newspapers, Mr. Adeniyi Adesina, the governor simply said: “I have seen you from the CCTV while you were waiting to see me. My spirit works with you. But I don’t know if you will be willing to work with me. “ At that time, I was still skeptical. But two weeks later when I made up my mind, and I was to resume, my predecessor led me to Mr. Governor’s office to inform him I was resuming that day. Mr. Governor shook my hands, congratulated me and said: “Don’t worry, we will make you comfortable and help you to settle down.”

I moved into my official quarters same night and the rest as they say is now history. However, before settling down for the job, I gave myself three months within which to decide whether I wanted to stay or not, reason being that until I encountered Mr. Governor, I was one of those who believed one cannot do the job of a publicist for a person one barely knows. Besides, as a young man, I was also conscious of the brand I had built of myself over the years. I wouldn’t want anything to diminish that brand.  However, in less than one month, four incidents happened consecutively, all of which made me change my mind and I decided I had indeed come to Osun to stay. The first happened when we were to respond to the LAUTECH Ogbomoso issue. I was barely two weeks old on the job and needed to issue a statement on the contentious Ladoke Akintola University of Technology (LAUTECH) matter. I had gone to see Mr. Governor on the need to respond to certain misinformation in the public space concerning the issue at the time. Mr. Governor reluctantly accepted that I do the statement. His initial hesitation was borne out of the fact that he detests controversy, no matter how little.

As I reached for the door, Governor Oyetola called me back, saying “CPS be sure of your facts, don’t give account of what we haven’t done. Don’t say things that will embarrass us. Say only those things we have done.” That day, Mr. Governor made a strong impression on me. As I made to leave his office, I knew my job was simple as I wouldn’t struggle to communicate the policies and programmes of the administration to members of the public. Here is a fine gentleman, who doesn’t expect you to cook up fallacies to serve the public. The second incident had to with his speech. A draft was made. But as we were reviewing it together, we got to a stage, he said: “CPS, these are all lies. Remove those paragraphs. We haven’t done anything of the sort.” By the time we were done reviewing the speech, more than half of the body was gone. Many a principal would certainly have gladly read those lies and half truths to the public and still feel good. The third incident happened at the Government House. It was in the evening. I was asked to contribute to a discussion. I had a contrary view to that of my Principal, the Governor. I stated this. He conceded to me, but said: “Look, come out of your shelf. Be free with me. Feel free with me. If I had not asked you, I would have taken a decision without hearing from you.”

The fourth and final one for the purpose of this piece occurred in Abuja. It was my first official trip with him. After the day’s job, he called me around 8pm, saying “CPS, have you been offered an accommodation”. I said no, but I quickly added: “I don’t need one. I have a home here. My family lives here, sir.” He said: “In that case, do not be in a hurry to set out tomorrow. Take your time. Spend time with your family.” I was happy that here is a man that values family. I got home that night, told my wife and we both concluded that a Principal who bothers about one’s family, not about his job alone, is worth one’s sacrifice. That was the day I made up my mind to stay. So far, I can say with all sense of modesty that I can stick out my neck for my Principal. He has so far not disappointed. But a full dose of that will come in two months time when we will be giving our mid-term report.  Suffice to say that in Osun, we may not have all the billions, but we are surely getting our priorities right under Governor Adegboyega Oyetola. Despite the paucity of funds, my Principal has so far kept faith with the vision of the founding fathers of the state to sustainably build Ipinle Omoluabi – State of the Virtuous.

Since coming on board about two years ago, the governor has demonstrated that he not only understands and appreciates the peculiar needs of an average Osun person, but is also passionately interested in growing the state from where his predecessor left off. Rather than reel out excuses, he has been fulfilling most of the promises he made to the citizens of the state during the electioneering. From the Igbajo road which was last touched 33 years ago, to Atakumosa Market which got burnt in 2015, my Principal has validated the popular axiom:”the way to get started is to quit talking and begin doing.” Hear what the Asiwaju of Igbajo, a legal luminary, Chief Solomon Adegboyega Awomolo (SAN), who led a delegation of Igbajo Development Association (IDA) on a “Thank You” visit to Mr. Governor said last Sunday: “For many years, this (Ada-Igbajo) road has been crying for rehabilitation. Even before I became the Commissioner for justice in the State (1991-92), this road had been in a terrible state.

“But today, we thank God for using your government to come to our aid. This will go a long way to redefine many things in the benefiting communities.

“You have given us a great relief. Osun is very lucky to have you as Governor at this time. You have come to power with deep experience in both the private and the public sectors as reflected in the way and manner you have been prudently and sensibly running the resources and affairs of the State.”

Interestingly, from his achievements so far, I make bold to say that what Osun citizens will get from Oyetola’s administration will be an enduring legacy that would not only stand the test of time, but also one that would be remarkably different and which would remain a reference point, long after he would have completed his tenure.

My dear Principal, as you mark yet another birthday today, I pray to Allah to grant you the tolerance to deal with all the trials and travails that would be coming your way.

May Allah open His various ways of blessings and favour for you, today, as you add another year. He will protect you from all the evil tricks that emanate from Shaitan and his forces among men and jinn, overlook your shortcomings and show you grace and mercy. Amin.

I know that soon Allah shall give you that with which you will be well pleased.

Happy 66th birthday to you, sir!