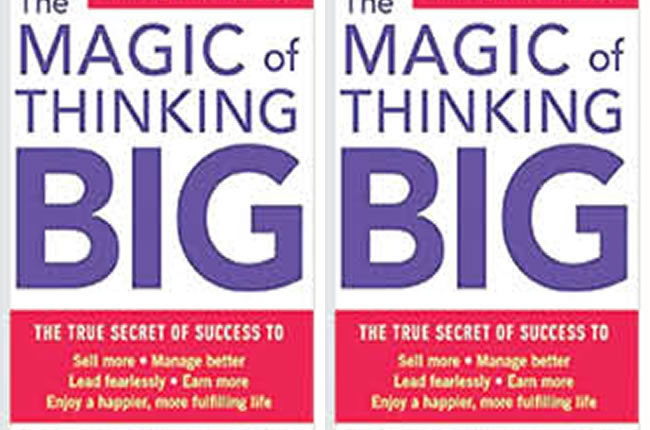 Think of the people who earn five times as much as you. Are they five times smarter? Do they work five times harder? If the answer is no, then the question “What do they have that I haven’t?” may occur to you.

In a book that has sold several million copies, David Schwartz suggests that the main thing separating them from us is that they think five times bigger. We are all, more than we realize, the product of the thinking which surrounds us, and most of this thinking is little, not big.

In the course of researching his book Schwartz spoke to many people who had reached the top in their field. Instead of getting detailed responses, Schwartz was told that the key factor in personal success was simply the desire for it. Rather than being ‘too many Chiefs and not enough Indians’, the opposite is true. Some people choose to lead, others to follow. Success is not primarily a matter of circumstances or native talent or even intelligence – it is a choice.

The Magic of Thinking Big tries to show us that in fact the canvas we work on is vast. Schwartz delivers to us the right quote by Benjamin Disraeli: ‘Life is too short to be little.’ We must enlarge our imagination of ourselves and act upon it. ‘Thinking big’ does work in relation to career goals, financial security and great relationships – but it is more significant than that. We are challenged to see ourselves in a brighter light, to have a larger conception of life. This is a choice that is no more difficult than the choice to keep doing what we’re doing, laboring in darkness.

The Magic of Thinking Big is basically about ‘getting ahead’, with a fair amount of attention to exponentially increasing your income, making that dream home a reality and getting your kids a first-rate education. It tells us how to think, look and feel ‘important’.

There is nothing mystical about the power of belief, but we must draw a distinction between merely wishing and actually believing. Doubt attracts ‹reasons› for not succeeding,  where as  belief  finds  the  means  to  do  the  job.  Schwartz  was  in  conversation with an d spiring fiction writer. When  the name of a successful author came up, the aspiring writer quickly said, ‹But I could never equal him; I’m not in his league. ‘Knowing the writer in question, Schwartz pointed out that he was neither super-intelligent nor super-perceptive, merely super-confident. The writer had at some point decided to believe that he was among the best, and so he acted and performed accordingly.

Roosevelt did not think that because he was a cripple he could not be President, Truman did not hold the fact of his limited education against himself, and Kennedy chose not to believe that his youth was a bar to power. By earmarking our upbringing, age, luck, intelligence, spouse, health etc. as ‘the thing which is holding us back’, we are falling prey to the disease of failure.

Never depend on luck to get what you want. The only vaccination against ‘Excusitis’, as Schwartz calls it – ‘commonly known as failure’s disease’ – is conscious self-belief. Schwartz knows that as soon as we hit a rough spot our thinking is likely to shrink back to its normal size, yet this is exactly when it is crucial not to. Sporting champions do not collapse when, in the course of a game, they are being beaten. Instead of building a case against themselves, they will at this point remember that they are a champion.

The author also reminds us that every big success is created one step at a time, therefore it is best to measure yourself against the goals you have set, rather than comparing yourself to others.

Schwartz says ‘Go first class’. This does not mean always getting the most expensive ticket. It does mean getting your advice from successful people, and not giving the jealous the satisfaction of seeing you stumble. Spend time with those who think on a large scale and are generous in their friendship. After a while, the base level of what you think possible will rise. People make assessments of us whether we like it or not, and the value the world gives us matches the one we give ourselves.

Are ethical leaders good for business?