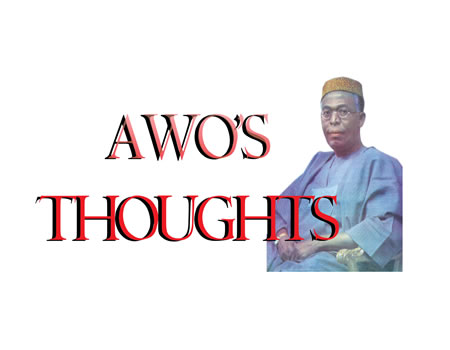 Full text of a lecture delivered by Chief Obafemi Awolowo, Vice Chairman of the Federal Executive Council and Federal Commissioner for Finance, under the joint auspices of the Geographical Society and the Federalist Society of Nigeria at the University of Ibadan, on 16th 1970.

ALL the requisite material and manpower resources for the early attainment of economic greatness have always been available in abundance, and are only waiting to be conscientiously recognised, mobilised, and deployed. Potentially, Nigeria is a giant economy capable, under prudent and competent guidance, of making giant strides. All those who are concerned with making plans for her forward motion must recognise this important fact, lest, as in the past, they hinder her natural velocity. There are classical instances of inadvertent hindrances in the past. The 1962/68 NATIONAL DEVELOPMENT PLAN assumed a growth rate of 4 per cent. The GUIDEPOSTS FOR SECOND NATIONAL DEVELOPMENT PLAN which was published in June 1966 assumed a growth rate of 6 per cent for 1968/73. In paragraph 10 of the GUIDEPOSTS, the following revealing passage occurs: ‘If the 4 per cent minimum growth rate per annum assumed under the current plan is realised, the GDP will amount of about £1,304 million in 1967/68. During the period 1968/69 to 1972/73 it will be assumed that the GDP will grow at the rate of 6 per cent per annum, bringing it to a level of £ 1,744 million at the end of the next Plan period.’ Contrary to the plans and prognostications of experts, the economy actually grew at an average rate of6.6 per cent during the period of 1959/67, and the GDP in 1966/67 stood at £ 1 ,605 million, as contrasted with £ 1,304 million and £ 1,744 million forecast for it for 1967/68 and 1972/73 respectively.

It is clear, therefore, that it is not Nigeria that needs to be big economically. She is, potentially, an economic giant already. It is we, her sons and daughters, that have need to enlarge our outlook and thinking, and widen the scope of our planning, to match her natural gianthood.

In ordinary justice to her size and potentialities, therefore, it is imperative that we should think and plan big for Nigeria. But even the sheer gargantuan nature of our problems demands big and massive approach.

All over the place, we talk about winning the peace. Some think that peace can be won by ‘de-biafranising’ the Ibos; others think that the way to peace is to create more States in order that some of the citizens of the new States might become Ministers, Commissioners, Judges, Permanent Secretaries, Board Members, etc.; others still believe that peace can only be secured by keeping the army in power for many more years; and so on, and so forth. I offer no comments here on these and other suchlike lines of thinking.

‘But I say unto you’, that there will be no genuine peace in this country, unless, in the main, the war against grinding poverty, hunger, preventable diseases, squalor, and ignorance among the masses of our people, is waged throughout the land, with the same united purpose, patriotism, and grim determination as we had waged the war against secession. It is, perhaps, not generally realised that, in all history, the root causes of rebellion and violent discontent are the evils which I have just enumerated.

We have won the civil war. Yes, indeed. But to win the war for peace, we must recognise the real enemies. Otherwise, all our efforts would be totally misdirected and dissipated. As far as I can discern, the aggressors against peace and stability in Nigeria are abject poverty, hunger, diseases, squalor, and ignorance. They are more devastating in their ravages, more insidious, more thorough, and more resistant in their operations, than any armed rebellion. They are the enemies which must now be crushed, and crushed ruthlessly.

There are only two obstacles that I can see to the early conquest of these monstrous enemies, and hence to the rapid economic and social transformation of Nigeria. They are: lack of sufficient number of Nigerians with the requisite expertise to plan and execute our development programme, and lack of sufficient resources to defray the foreign exchange elements of any bold and ambitious plan that we may make. As to what we have to do to overcome these obstacles, there can be no dispute or equivocation. We must:

1. in the immediate present, hire the required know-how from abroad, and, as a long-term policy, after the fashion of Meiji Tenno, the great Japanese Emperor and inspirer of the modernisation of Japan, send our boys and girls, our men and women, to any part of the world where they can acquire the necessary know-how and expertise; and

2. accumulate enough foreign exchange resources on our own, supplemented with such external aid as friendly . Governments and sympathetic foreign institutions may be disposed to give us, to pay for the importation of foreign know-how, expertise, and capital goods.

During the war, we had to plan rigorously and think big, to survive as we have done, without any blemish on our national honour and self-respect. The momentous challenges of peace, and the acknowledged and proven potentialities of our great country for giant economic growth enjoin upon all of us greater exertions of body, brain, and mind – now and in the years to come.

Ambode: The shape of hope to come

I want to use sax to heal the sick, raise the dead, 11-yr-old, saxophonist