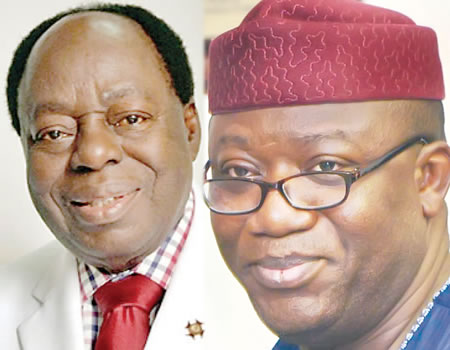 I had the advantage of reading the write-up by Nseobong Okon-Ekong from the interface Dr John Kayode Fayemi, the Executive Governor of Ekiti State, had with some journalists on his Second Missionary Journey, a privilege not granted many.

I am particularly thrilled by Governor Fayemi’s dream and vision of wanting to build a Knowledge City among other laudable developmental efforts in his attempt “to …shoot the state into limelight with its emerging economy and attract investors as well as tourists.”

I am highly impressed with the news that the governor wants “to turn that whole area where you have Afe Babalola University into a Knowledge City; that is medical hub, an IT hub, an Agric-tech hub, innovation hub. Investment can then come to Ekiti and we turn the place to a hub for commercial activities.”

This, when implemented, will no doubt turn Ekiti State into a true Knowledge City, the hotbed of Computer Science innovators, deep-pocket Venture Capital Firms and Angel Investors and the place where one can meet the right people with the right resources who can help turn an entrepreneurial dream into reality.

Stanford University owns 700-acre Industrial Park in with William Miller and Tim Lenoire as the architect and founding fathers of the present Stanford Industrial Park which has made Silicon Valley famous, thereby making Stanford University the richest university in the world while Silicon Valley remains the hub of Research Science and Technology and Innovation in different shades and shapes.

Similarly, the proximity of ABUAD, its 121-unit Industrial Park, the 400-bed ultra-modern Multi-system Hospital and ABUAD Agricultural Enterprise Farms will be of tremendous advantage to the Knowledge City as Stanford and its 700-acre Industrial Park have positively affected the fortunes and future of Silicon Valley.

For emphasis, Stanford University, a co-educational and non-denominational institution, was established in 1891 by Leyland Stanford, former Governor of and US Senator from California with an endowment of $5million. The present day value of which is $132 million. It is one of the top fund-raising institutions in the country and became the first university to raise more than a billion Dollars in one year.

Its alumni have founded many companies, including Google, Yahoo, Microsystems, Instagram and generate more than $2.7 trillion in annual revenue equalling the 10th largest economy in the world. It is the alma mater of 30 living billionaires, 17 astronauts, leading producer of members of US Congress and has produced 60 Nobel laureates etc. In 2014, endowment and donation alone was $336,697,860,000 while in 2015 endowment and donation was $368,147,895,000 which was much more than the total budget of Federal Government for all higher institutions in Nigeria. Indeed, Stanford shares a relationship will Silicon Valley unlike any other university on planet earth.

In the last 50 years, Stanford University, its staff and graduates have launched some 1,200 companies. Today, more than 50 per cent of Silicon Valley’s product comes from companies founded by Stanford Alumni. Besides, like many research institutions, Stanford is responsible for generating lots of patents.

In the same way, ABUAD, which is only nine-and-half years old, boasts of being the first university in West Africa to commence Mechatronics Engineering in affiliation with FESTO of Germany and the graduates are now commencing FESTO Lab. With Mechatronics Engineering, the university has the requisite capacity to train industrial personnel and mechatronics lecturers. In addition, it offers Certificate Courses in Electro-hydraulic and Electro-pneumatic, Hydraulics and Pneumatic and Industrial Automation as well as Assembly and Bottling.

The Knowledge City will be transformed to our own Silicon Valley

At the hearing of the petition, the chairman, Mbanefo, asked this question: “Do you think, Ekiti State, if created, will be viable?” My answer was an emphatic yes, which I predicated on the following:

I told the panel about the abundance of highly qualified human resources in the state. I emphasised the fact that it is on record that most of the professors in Nigerian universities are of Ekiti origin with at least a professor from every homestead.

I also submitted that there was a wealth of fertile and well-watered tropical land that readily supports agriculture, stressing that a time it was when Ekiti was producing as much as 52 per cent of the Cocoa in Western Region. I finally submitted that Ikogosi Warm spring, the only one of its type in West African, could be exploited by both Ekiti State Government and the Federal Government and turned into an international tourist centre that will earn billions of Dollars for Ekiti State and Nigeria.

And so for me, what Governor Fayemi is about to do is like wanting to actualise the dream of the founding fathers of Ekiti State and my submission before the Mbanefo Panel.

In order to accomplish the Knowledge City project, there is an urgent need for relevant infrastructure like motorable roads, rail line and airport without which there can be no appreciable development.

Even if all these ideal projects being powered by the Fayemi administration cannot be completed in four years, appreciable progress would have been made. It will be left to those coming after him to complete them.

I agree entirely with Governor Fayemi when he said: “I feel that government is a continuum. All of us, regardless of political party that we belong to, owe a duty to, as much as possible, complete unfinished project because if you don’t do that it is ultimately going to be to the detriment of your state. It is the state resources anyway. It is not the governor’s personal resources expended on such projects.”

I believe that in respect of the airport, an airstrip could be completed before the expiration of his tenure. It must be borne in mind that the federal allocation coming to Ekiti State is higher than that of Gombe State which was allocated an airport the same time Ekiti State was allocated. Today, the Gombe airport is up and running. With determination, ours can join the comity of states with airports. Also, it should not be difficult for the Fayemi administration to resurface most of the roads in Ekiti, all of which are not more than 30 miles from Ado-Ekiti, the state capital.

I pay special tribute to Governor Fayemi for the reference he made to our multiple award-winning university, ABUAD, the medical exploits being made by our 400-bed Multi-system Hospital and our burgeoning 121-unit Industrial Park which is similar to that Stanford University.

What has delayed the take-off of the industrial park is a suit filed by the company to which the government allocated land in 2009 before the university came into existence. Not only did the company fail to pay the statutory land charges, it also did not develop the land within two years as required by law. In the circumstance, the state is empowered to re-enter the land and cancel the previous allocation. Thereafter, the government allocated the said land to ABUAD to form part of its industrial park. The company filed an action in the High Court to challenge the allocation by government but the case was dismissed by the High Court. The company later appealed to the Court of Appeal which also dismissed the company’s appeal. As soon as the Supreme Court delivers its judgment in the case before it, the Industrial Park over which we have spent billions of Naira will flag off.

Implementation of the Knowledge City Project, a possibility:

It is a well-known fact that electricity is one of the most important elements for the take-off of Industries. Consequently, ABUAD has sponsored two Independent Power Projects (IPPs) which are working day and night to provide reliable and uninterrupted power supply to ABUAD, ABUAD Industrial Park, the Multi-system Hospital and the ABUAD Agricultural Enterprise Farm, as well as the Ekiti Airport which will serve the Knowledge City. The Knowledge City is surely an achievable one.

When we wanted to start our university in 2009, not many people believed it was possible. But then, what I have more than most people is determination, industry and faith. With all these virtues, we pressed on to establish the university which commenced academic works on Monday, January 4, 2010 and today, the NUC, the regulatory authority for University Education in Nigeria, has acknowledged the university as “a model, benchmark and reference point,” as well as “the pride of university system in Nigeria.” It has also been described by the Association of Vice Chancellors of Nigerian Universities (AVCNU) as “the most successful private university in Nigeria” and endorsed by UNESCO as “a world-class institution of higher education.”

It is a well-known fact that giving is not in the Nigerian culture. In spite of this, during the agitation for the creation of Ekiti State, the committee raised funds in Ado-Ekiti, Ibadan, Lagos, Abuja and Port-Harcourt. We may have to do the same thing again to support the take-off of the Knowledge City Project. I believe that we have people who can donate generously towards the promising project.

I am very happy that Governor Fayemi has contacted the African Development Bank (AfDB) on the Knowledge City Project. It will be recalled that the AfDB, after its well-known rigorous screening before disbursement of funds, found ABUAD worthy of its facility on account of its being a prudent manager of funds as epitomised by the Founder.

AfDB has never assisted any university before. However, it was convinced about the facilities, performance and commitment and decided for the first time to assist ABUAD and make it a pilot for other universities in Africa and beyond.

The Knowledge City will be an ideal venture for AfDB, the state government and ABUAD while many Ekitis who have industries outside the state and outside the country would be encouraged to invest in Ekiti State.

Obasanjo and burden of a postmaster general