The duty of politics 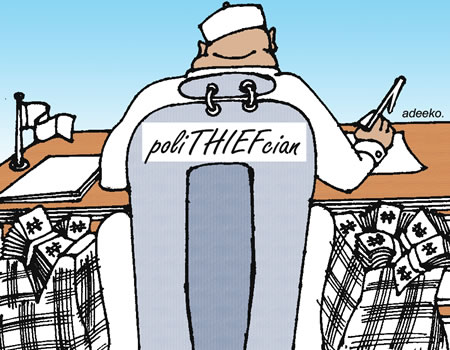 AS virtually every adult person in Nigeria would know, the word politics is usually perceived as a negative subject in the heart, mind and even spirit of most people in the country. They do so because those who choose to do so as a career, especially from the time of the military interregnum of 1967 to 1999 had not done it well. The civilians who had also waded into it from the time of the so-called second republic, till date, have not done so any differently. But indeed, this negative attitude to what we may now call ”professional or career politics” is also a world-wide phenomenon; even though it must be worst in Africa and some of the other developing countries, but most especially, Nigeria. All of these facts are, of course indeed, a very grave pity!

It is a pity that, because many professional or career politicians had done so very dishonestly, many people would come to treat the subject as a negative matter. This is a pity, precisely because, as the true meaning of the word actually is, politics is a very positive, essential and inevitable thing to do. As understood, politics is the science and art of personal development, personal and group organization and relationships that allow oneself and/or the group to be able to influence (or indeed, to capture) authority or power over the given group of people (i.e., the polity) in order to use it to pursue the attainment of the greatest good for the greatest number of the people in that polity. This is what Chief Obafemi Jeremiah Awolowo did for the Yoruba race (his primary and undisputed polity) between the period of 1949 and 1976. This is what Sir Ahmadu Bello did for all his life, but especially from after the Second World War; that has set the script on which this country has been run from the foundation of the Northern Peoples’ Congress (NPC) in 1949 to date, especially to the optimal material gain of his primary and undisputed polity of “the Northern Peoples” until this very moment in time!

As anybody who studies history objectively and in a balanced manner will learn, our main political problem in Nigeria is that we are still looking for any of these so-called professional politicians who will do for the Nigerian people (as a single polity) as those people had done for those their primary polities. We are still looking, in Nigeria, for such career or professional politicians; who will do as these “our heroes past” had done, but only limitedly and, to only tribal or such other limited Nigerian polities. On the contrary with those other “heroes past”, Dr. Nnamdi Azikiwe had his mind fixed on a pan-African enterprise for which he needed the entire country as a block and pursued that one Nigeria till his death, as his one and only political constituency; hence his rather funny “Zik of Africa” nickname or slogan. There were, of course, other reasons why Zik could really not have had any other real political constituency all his life, except as a matter of (most times) emergency and rescue operation (as in 1952 and the 1966-1968 only, periods) of his entire life. But the unwise or the non-seriously objective and socioculturally and historically studious may never come to learn of these facts. However, these matters should be the matter of another entirely different discussion, of course, but not here!

Now, to come to the real matters at stake, I do not just believe but know that politics as it is, is an utmost virtue and a duty from the very abode of God! Every human being MUST be involved with it; and indeed are invariably so doing! We do so in our homes and family. We do so at school, we do so at our places of work, we do so in our various religious communities – churches, mosques, temples, shrines, alcoves, dens, etc – and we do so in our various natural communities of extended families, villages, towns and clans. Indeed, the duty of honest and non-partisan politics is one which becomes higher as one’s education increases. It would be obvious to all that such non-partisan politics is a Godly duty; of which, anybody that fails to do so will not see the kingdom of God, to talk less of entering it!

However, in contrast with this non-partisan politics, partisan politics would seem to me to be (talking jocosely but also very seriously, like) excreta from the toilet of the very devil himself! It is a very dangerous and often damaging affair, both for those who do so, but especially for the polity that they are supposed to be serving; and usually hardly do, except for the very few like the Nwalimu Dr. Julius Nyerere of old Tanzania, Dr. Nelson Mandela of South Africa, to name quite a few only. Partisan politics is naturally, intrinsically, not a very positive thing. This is the reason that in the politically healthier climes, we always hear them talking of bipartisan politicking – that is, talking of the need to accept and to marry whatever is good and reasonable from the points of view of both the ruling political party and their opposition group(s) – for the maximum and true benefit of the polity that booth of those parties are claiming to be in politics to serve! It is this need for the neutralization of the evils of partisanship in professional and career politics that in some of the most politically healthy countries, partisan politics is not allowed at the local government level. This detailed discussion will be an entirely different subject matter for another exploration here, but not this one!

The very evil of partisan politics is that it very readily blinds people’s eyes to the good that people outside such parties say or do. They only see what they think is good in themselves; and most readily are looking for and seeing only the wrong or evil in what people that are not in their own parties are saying or doing. In that way, they short-change both themselves as well as the entire polity that they are serving. So, when will Nigerians begin to see and to organize their politics in these healthier ways? I believe that this must be a prayer point for all the “holy men and women of God” and the “prayer warriors” that Nigeria has so much of! It should also be so for the rest of us rather simple, easy going and normal Nigerians. May God hear those prayers in time also!

‘How govt can take disabled persons off streets’

Recession: Getting the shackles off our feet

Redefining the politics of development of Oyo State

This boggy called corruption by APC

Anambra 2017: Why are women taking the back seat?