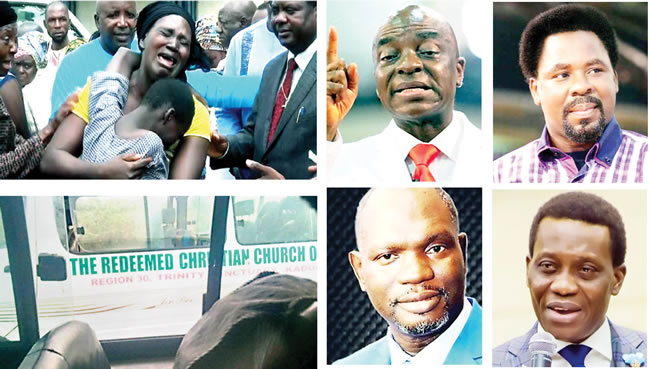 SEYI SOKOYA reviews the events that shaped the church in the outgoing year.

The year has been an eventful one in the Church. Though we are in the twilight days of the year, intriguing and terrifying events had already taken place, most of which will continue to linger on in the minds of many, especially the most affected.

However, the year could also be described as one with a bitter-sweet experience as the Church had relief from the effect of the deadly pandemic that has been ravaging the world since last year, though it could not be said with certainty yet that all is well as another variant had emerged.

As the New Year began, the faithful began to experience total freedom to attend physical services in churches when the Federal Government lifted the ban on worship centres. This development brought about a new atmosphere in the church as many Christians were delighted to converge and continue the usual practice of congregational worship.

Churches across the country, especially the states most threatened by the pandemic, were in a joyous mood through to the first quarter of the year, which made Christians across board to experience a hitch-free Easter celebration unlike 2020 when the whole world celebrated an unusual Easter.

However, not long after the Easter season, tragedy struck the church, precisely, on April 28 when the Christian body received the news of the death of Emmanuel Abina, the son of the General Overseer of The Gospel Faith Mission International (GOFAMINT), Pastor Elijah Abina, who died during a brief illness. The church was yet to get over the rude shock, before another tragedy struck as Pastor Dare Adeboye, second son of the General Overseer of the Redeemed Christian Church of God (RCCG), Pastor Enoch Adeboye, died in his sleep at his Eket, Akwa Ibom State residence on May 6.

The two tragic events threw the church into a frenzy and generated mixed reactions within and outside the church, but the two notable clerics, however, ignited the spirit of people across the country to remain steadfast and move on despite the loss.

Along the line, the church on several occasions had its fair share of the security challenges facing the nation as many clerics and hundreds of Christians were kidnapped and killed by bandits and gunmen.

Some of the reported cases include the abduction of a Deeper Life Church cleric, one Pastor Otamayomi Ogedengbe, whom one Dayo, a church member, organised his abduction in Akure, the Ondo State capital.

Another Reverend Zakariah Ido and 16 church members of the Evangelical Church Winning All in Kaduna were also kidnapped in an attack that left one person dead, during a church service.

News also had it that bandits killed one and kidnapped 100 Baptist Church worshippers in Kaduna, though it was also reported that the abductors later freed 61 of them and nine others. Another frightening report was also that of the kidnapping of more than 120 students abducted at the beginning of July from the Bethel Baptist High School in the northern town of Damishi, but about 28 students were released after the intervention of the church.

A busload of members of RCCG was also attacked by gunmen in Kaduna State in the first quarter of the year.The victims were reportedly kidnapped during the attack on their way to Kachia in preparation for the church’s Let’s Go a Fishing Easter programme.

However, the victims were eventually released after the intervention of the state governor, church leadership, and security agents.

The entire country was frozen on June 5 when many wake up on a Sunday morning to receive the news of the untimely death of the renowned televangelist and founder of the Synagogue Church of All Nations, Pastor Temitope Balogun Joshua, popularly known as TB Joshua.

TB Joshua’s death shook many African countries and foreign nations as many personalities and representatives of international bodies and nations paid their last respect to the cleric at an elaborate burial held for one week.

But tussle over the succession of the church founder became messier. Crisis rocked the church for months almost immediately after TB Joshua was laid to rest. Eventually, the baton of the leadership of the church was handed over to wife of the late cleric.

The death of the former General Overseer of the Foursquare Gospel Church, Dr. Wilson Badejo, at age 74, on August 7 also threw the church into mourning. He was eventually given a befitting burial, at a series of events graced by top church leaders and top functionaries.

In addition, a controversial act of the sacking of pastors by the Living Faith Church International (aka) Winners› Chapel by the church authority led to a series of debates. But the founder of the church, Bishop David Oyedepo, later explained that the pastors were sacked because they were found wanting in the area of productivity.

One Pastor Peter Godwin, among other affected clerics claimed that the church sacked the pastors in Ekiti, Benue, and other states for having a church growth index that fell below expectations.

Just recently, another tragedy struck the Christian fold as a brave kidnapped cleric, Reverend Dauda Bature of the First Evangelical Church Winning All (ECWA), in Hayin Narayi, Kaduna State, preaching the gospel to his captors was murdered despite collecting his ransom.

It was also reported that supposedly new converts stabbed an RCCG cleric, Pastor Babatunde Dada to death in the church located at FESTAC Town, Amuwo Odofin Local Government Area of Lagos State, on December 2, 2021, after withdrawing cash from the bank.

Despite these sad events which had characterised the year, yet there were still some cheery news that may still come as the year draws to a close.

Special usage of ‘Do’ Revisited

Some GOs not qualified to be church workers —Edokpayi

With prayers, Nigeria can overcome its challenges — Oladapo Moses