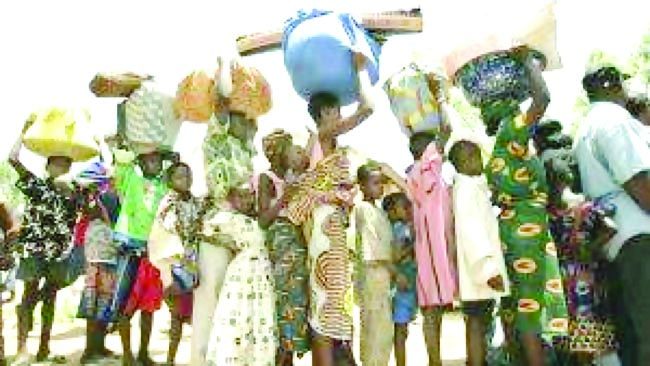 CLEMENT IDOKO writes on the burden of managing the rising cases of refugees and Internally Displaced Persons (IDPs) in Nigeria by the National Commission for Refugees, Migrants and Internally Displaced Persons (NCFRMI), as the Commission, with tremendous support from the United Nations High Commissioner for Refugees (UNHCR), and other stakeholders, are working hard to ensure safe and secure voluntary repatriation of 4,982 from Cameroon tomorrow, February 27, 2021.

Available records obtained from the National Commission for Refugees, Migrants and Internally Displaced Persons (NCFRMI) indicated that as of September, 2020, Nigeria was playing host to about 65,000 Cameroonian refugees, while the figures of Nigerian refugees in Cameroon was 116,409, Chad, 15,621 and Niger, 167,588.

More than 65,000 civilians had fled the South West and North West regions of Cameroon as a result of conflict in the country and sought safety in Nigeria’s southeastern Akwa Ibom, Cross River, Benue and Taraba states. Women and children account for four-fifths of the population. Crisis erupted in the country in 2017 when the Anglophone residents of the country’s restive provinces embarked on protests turned violent after they had had long grievances against the largely Francophone central government. They say the country’s French-dominated legal and educational systems have left them on the margins. Hundreds of people were killed in escalated attacks between separatist groups and government forces, according to rights groups.

On the other hand, thousands of Nigerians fled the country at the peak of attacks by insurgents on towns and villages, particularly in Borno, Adamawa and Yobe states, while a large number became internally displaced. Many of the Internally Displaced Persons (IDPs) are in various IDPs camps in the North East, Federal Capital Territory (FCT) and some other states of the Federation. This threw the four nations in the Lake Chad Basin region of Nigeria, Niger, Chad and Cameroon into humanitarian crisis to grapple with.

According to the International Organisation for Migration (IOM) Regional Tracking Matrix, as of July 20`8, there were 4,328,518 persons of concern in the region, comprising internally displaced persons (IDPs) and returnees from abroad and third country nationals. Nigeria had the largest share of the burden hosting 80 per cent of the persons of concern, while Cameroon, Niger and Chad hosted 10 per cent, six per cent and five per cent respectively.

This humanitarian situation prompted collaboration between the National Commission for Refugees, Migrants and Internally Displaced Persons (NCFRMI), the United Nations High Commissioner for Refugees (UNHCR) and other stakeholders to take proactive steps to towards enhancing the protection, and respond to the most urgent needs of the refugees.

The National Commission for Refugees, Migrants and Internally Displaced Persons was originally established as National Commission for Refugees by Decree 52 of 1989, now Cap. 21, Laws of the Federation, 2004. This was in fulfillment of the Federal Government’s obligation under Resolution 319(IV) of the General Assembly of the United Nations and Article 35 of the United Nations 1951 Convention.

The National Commission for Refugees (NCFR) as it was then called, was only responsible for managing the affairs of refugees. However, in 2002, President Olusegun Obasanjo enlarged the mandate to include migrants and internally displaced persons and this was the beginning of the expanded responsibilities of the commission.

Over the years, the NCFRMI has approached its mandate of providing Care and Maintenance as well as durable solutions to all its Persons of Concern (PoCs), including: Refugees, Internally Displaced Persons, Stateless persons, and Returnees, among others with every sense of responsibility.

The cornerstone of refugee operation is the provision of political protection and material assistance necessary at least to guarantee their basic human rights. In this regard, the Commission provides them protection, food and non-food items, skill acquisition and other forms of empowerment aimed at ensuring that they regain their dignity. They are also assisted to enroll in the National Health Insurance Scheme (NHIS) and to obtain Convention Travel Document (CTD).

Ultimately, the desire of the Commission is to ensure that the refugees are either assisted to return to their original homes voluntarily, integrated in their host communities or outright resettlement in the third countries. Accordingly, NCFRMI has facilitated the signing of a Tripartite Agreement between Nigeria, Cameroon and UNHCR for the voluntary return of Nigerians in Cameroon and Bipartite sub-project between the Commission and UNHCR for the protection and assistance of urban refugees in Nigeria.

The Honourable Federal Commissioner NCFRMI, Senator Basheer Garba Mohammed (Lado) acknowledged the daunting task of managing increasing number of refugees due to insecurity across the globe which Nigeria is not left out. On assumption of office in August 2019 as the Honourable Federal Commissioner, he set out clearly an agenda of strategic partnership with stakeholders in order to be able to tackle the challenges squarely.

On refugee management, Senator Mohammed said the Commission has enjoyed immense support from the government as well as strategic national and international partners in tackling its mandate.

According to him, the Federal Government under the leadership of President Muhammadu Buhari, has done well for the Commission through special intervention funds to support budgetary provisions while noting that the United Nations High Commissioner for Refugees (UNHCR), the UN agency responsible for refugees’ management, has been very supportive to the Commission.

Dwelling on some of the activities carried out with the support of UNHCR, the Federal Commissioner said that in 2019 it supported the voluntary repatriation of 134 Nigerian refugees of Adamawa State origin from Cameroon and has been part of the ongoing plans for massive repatriation of Nigerian refugees of Borno origin back to their homes. A batch of 4,982 of the refugees are expected to return tomorrow, February 27, 2021.

Meanwhile, a Federal Government delegation led by the Honourable Federal Commissioner, NCFRMI who is the chairman of the Technical Working Group (TWG) on repatriation of the Refugees were in Cameroon recently to deliberate on modalities for smooth return of the refugees. He was represented by the Director of Refugees and Migrants Affairs, Hassan Tai Ejibunu.

The UNHCR has also provided support in the area of motor vehicles to aid transportation in the Commission, supply of food and non-food items for the refugees in various locations.

In December, 2020, the Commission in collaboration with the UNHCR convened the Refugee Eligibility Committee meeting where 1,435 Nigeriens asylum seekers in Damasak, Borno State were recommended for grant of refugee status in Nigeria while another213 persons of other nationalities such as Syria, Cameroon, Congo and Central Africa Republic have also been verified.

In the same vein, the UNHCR has assisted the Commission in the deployment of 12 staff each to Ogoja in Cross River State, Adikpo in Benue State and Takum in Taraba State respectively to support the on-going registration exercise of refugees in those areas.

Recall that on 28th of February, 2019, the index case of COVID 19 was recorded and it soon spread like wild fire, bringing extreme hardship on the people, especially the older persons. The UNHCR continued to provide assistance and basic protection services. Consequently, it supplied large quantities of COVID 19 prevention materials such as hand wash, gloves, facemasks and buckets among others, which complemented Commission’s efforts and were widely distributed to refugees at their various locations. Early this year, January 3rd-16th   to be specific, the UNHCR supported a Joint Mission to three North- West States namely: Katsina, Sokoto and Zamfara to conduct Rapid Needs Assessment and Protection Monitoring due to activities of bandits which have caused massive displacements.

“There are no reports of molestation of Nigerian refugees from anywhere in recent times to our knowledge,” he said.

On Internally Displaced Persons (IDPs) Senator Mohammed reiterated that through the special intervention of the Federal Government, the Commission has embarked on the construction of massive housing programme under the IDPs Resettlement Cities Project which has commenced in four initial States: Katsina, Borno, Zamfara and Edo. It consists of 600 units of furnished Two Bedroom in each of the selected States with provisions for educational facilities, business activities, worship places as well as adjoining farmland.

Similarly, the Commission with support from the Central Bank of Nigeria (CBN) has also commenced ‘Project Reliance’ which is designed to equip displaced persons with skills for better livelihood. Under the Project Reliance, 50 different skills and vocations have been identified for beneficiaries to choose from.It is noteworthy to state that the Commission has flagged off distribution of food and non-food items to Persons of Concern in 13 states of the federation in the last one month, and other states will take their turn shortly.

The return to the state of nature

My quest for wealth landed me in another trouble after initial arrest, arraignment…