Terrorism: Christians urged to pray against enemies of peace in Nigeria 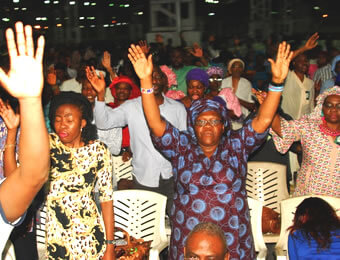 Christians across Nigeria have been urged to intensify earnest prayers against enemies of peace and tranquility in the country and across the globe.

A Christian fellowship in Warri, Harbinger Christian Publication, headed by the Harbinger of the Last Covenant, Archbishop Iyke Nathan Uzorma, made the call on Friday at the Global Peace Prayer Conference held at Enerhen, Warri, Delta State.

He called on Christians to pray against those blocking the enthronement of peace in Nigeria and the world.

Archbishop Uzorma, in his sermon with the theme: “My Peace I Give Unto You,” said that there might be some people who are making a fortune as a result of the insurgency and insecurity in Nigeria and general conflicts happening around the world.

Reacting from the book of Luke 10:5,6 and John 14:27, Archbishop Uzorma urged Christians to take a stand for peace as the absence of peace in a home and a nation is the foundation of poverty.

“We must pray against those blocking peace in Nigeria. There might be some people that are benefiting from insurgency and insecurity in the country; maybe because of the arms they are selling to the terrorists and therefore, don’t want peace in the nation.

“The issue of terrorism is as a result of fund mismanagement in the country since independence.

“There’s an adage in Igbo language that says “when there’s crisis, the chiefs eat.

“Absence of peace in a home is the foundation of poverty. When you understand what is happening in Ukraine and Russia, you will understand peace.

“Begin with your mouth and from your heart; that when you speak, someone will have peace.

“The government alone cannot give peace. Take a stand for peace in your family, community and nation. We are here in this world to be our brothers’ keepers.

“When you stand for peace and practice peace, the Almighty God will stand for you,” he reiterated.

The cleric also warned that politicians should desist from using the youths as political thugs and help them legitimately.

“We are using this opportunity to plead with the politicians; if you want to help the youths, help them. Give them something to do.

“Don’t give them guns to parade themselves as political thugs. Don’t do something you won’t do to your own children to other people’s children,” he said.

Nigerians are in bondage —Fr. Akoan