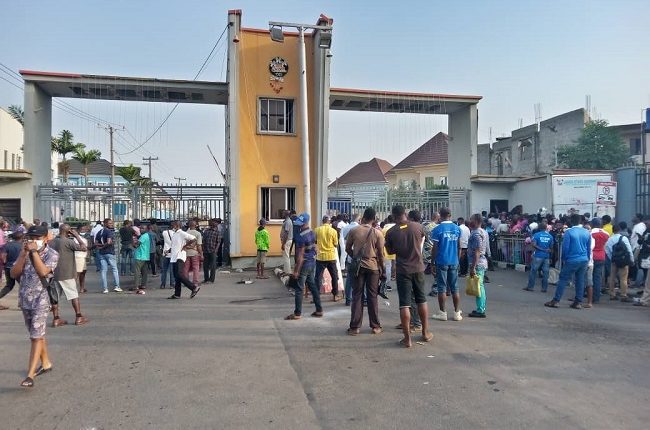 THE intervention of Governor Babajide Sanwo-Olu on Wednesday saved the Magodo Estate Phase 2 from demolition by the Adeyiga family of Shangisha, reportedly acknowledged as the lawful owner of the land where the estate is sited, by the Supreme Court.

Tension engulfed the estate from Tuesday afternoon through Wednesday morning when the judicially-acclaimed owners rolled a bulldozer to the gate of the estate, connecting Shangisha, preparatory to pulling down multi-billion naira hundreds of buildings marked for possession on Tuesday afternoon.

When the bulldozer was denied access by the leadership of Magodo Residential Association (MRA) Tuesday night, the claimant-family moved early Wednesday morning to execute the apex court’s judgment which returned the estate land to the family.

The estate’s leadership quickly rallied the residents as early as 4:00 a.m., to resist the planned invasion by the claimant-family, which had, earlier on Tuesday, got court bailiffs in their numbers to mark hundreds of buildings for possession.

Security for the bailiffs was provided by more than 100 police officers, some of whom were left behind till Wednesday morning, laying a kind of siege to the estate.

The gates to the estate were firmly locked against the bulldozer, preventing residents from going out and visitors from coming in.

The officers were eventually pulled away by a Deputy Commissioner of Police, Ahmed Kotangora, following the intervention of Governor Sanwo-Olu, through the Mayoress of Ikosi-Ketu Local Council Development Area, Samiat Abolanle Bada, who was physically on ground to appeal to the police to end the siege, while assuring the residents that the governor would take care of the matter.

The Adeyiga family had sued the state government for forcibly taking over the land for a supposed special project, only to sell to individuals.

Bada had also disclosed that the Attorney-General and Commissioner for Justice in the state, Mr Moyosore Onigbanjo, would issue a statement on the long-running ownership battle for over 500 plots of land in the estate.

The statement was yet to be released as of press time.

Meanwhile, the MRA chairman, Mr Bajo Osinubi, has urged the governor to call the land owners of Magodo-Shangisha to a roundtable in order to proffer permanent solution to the tussle.

Mr Osinubi said such roundtable is very important even though the governor had promised the estate would not be invaded again. While narrating the buildup to the tense hours of Tuesday and Wednesday to newsmen, he said over 100 armed policemen stormed the estate on Tuesday night that they wanted to take possession of the land without any letter to the effect.

He, however, stated that the policemen performed their duties professionally, even though they claimed that they were acting on the instruction of the Inspector-General of Police.

He said: “This case can be solved by the government. Therefore, we are praying the current governor, Mr. Babajide Sanwo-Olu, to face this problem frontally.

“Call Chief Adeyiga and others to a roundtable to settle this case. We are ready to cooperate with the Lagos State government to ensure that permanent solution is reached.

“The Lagos State government has sent in their special squad to make sure the police are evacuated.

“They promised us it would never happen again. I must say this that one of the people that helped us to get to the governor is the Ikosi-Isheri chairperson, Princess Samiat Bada.

“As at now, the Lagos State government has stepped in. The DCP OPs told us that the Inspector-General of Police had informed him to evacuate the police.

“When they came in yesterday [Tuesday], they came with over 100 armed policemen. There was no policeman here yesterday without an AK-47.

“When they came in, they said they wanted to take possession. And we were like, possession of what?

“But, the police never arrested us. They behaved professionally. They claimed they came from the Office of the Inspector General of Police.” he said.

Osinubi said the policemen were camped at the police post in the estate and even used the operational vehicle purchased for the police post to move around to mark the buildings for possession.

Deji Fasusi, lawyer to the claimant-family in a short statement on the stand-off said, “The Landlords Association sued the Military Governor of Lagos State and others in 1988 over the unlawful and forceful acquisition of their land. The association alleged that the government demolished their houses in the process and threw down their chairman who has since gone blind.

“Many others in the struggle within the period were brutalised; majority of the principal actors are now dead. Thankfully, the chairman survived. He is a nonagenarian and it is amazing that God has spared his life.

“Yesterday, after 37 years of injustice, they began the process of reaping the fruit of their judgment as they triumphed over the Lagos State government at the Court of Appeal and at the Supreme Court, but their attempts to levy execution has been futile until yesterday [Tuesday] when they were able to begin the process and along with sheriffs of the court and the police whose duty it is to maintain law and order, proceeded lawfully with their duty.

“The narrative that hoodlums attempted to invade Magodo is false and misleading.

“As legal counsel to the Landlords Association led by their chairman, I can categorically state that over 100 sheriffs with policemen were on ground yesterday [Tuesday] to do their lawful duty. It is hoped that this clears the air.”

Ubuntu— ‘A person is a person through other people’: Human relationships and emotional wellbeing