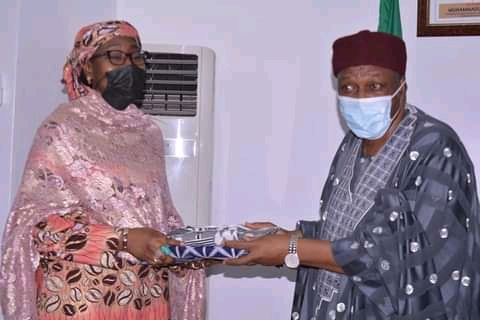 Taraba State governor, Darius Ishaku on Tuesday said the state was potentially capable of supplying Nigeria with enough needed rice if the federal government empowers the state with fund and inputs including mini tractors.

The governor disclosed this while playing host to the market enterprise adviser of International Fund for Agricultural Development (IFAD) – Value Chain Development Program (VCDP), Hajiya Fatima Buhari, at the Government House Jalingo, explaining that the statistics of rice production in Nigeria in the last six years have proven clear that Taraba State can supply Nigeria with the needed rice and end the idea of rice importation into the country if supported and empowered by the federal government.

According to him, the IFAD-VCDP transformation system in the production of rice in the country which Taraba is currently topping amongst states has made him go on more research work where he realized the potential and capacity the state has in the rice production.

Earlier, Haj. Buhari disclosed that Taraba has been the pride of Nigeria in rice production since the coming of the IFAD-VCDP program.

She noted that Taraba has been top in payment of counterpart fund which gives farmers in the state advantage over others.

“We are proud of Taraba State, you have distinguished yourself among rice-producing states to be the pride of Nigeria.

“For the past six years now, Taraba has been top in terms of rice production since the intervention of IFAD-VCDP program and we want to appreciate the governor for being prompt in the payment of counterpart fund which is giving farmers in the state advantage over others,” Buhari expressed.

She commended Governor Ishaku’s administration for the efforts being made in ensuring the success of the IFAD-VCDP program in the state and boosting the rice production level of Nigeria.

Mr. Irimiya Musa, the state coordinator IFAD- VCDP, expressed that the administration of Governor Ishaku has made the IFAD-VCDP program proud in Taraba.