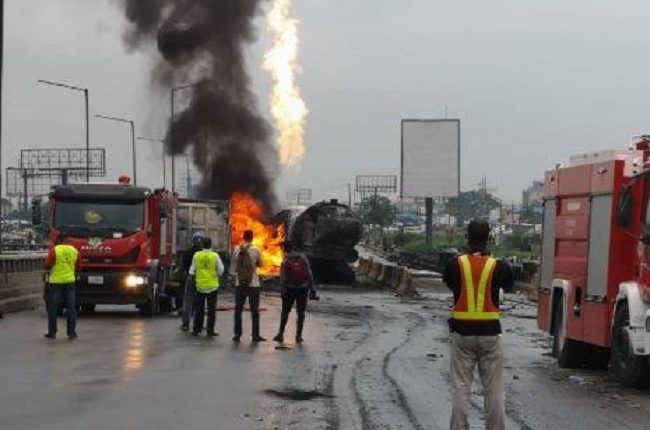 A tanker driver and his motor boy died in a tanker explosion that occurred in the wee hours of Saturday at the Kara end of the Lagos -Ibadan expressway.

This was according to the Public Relations Officer of the Traffic Compliance and Enforcement Corps (TRACE), Babatunde Akinbiyi, in a statement obtained by Tribune Online, on Saturday.

Akinbiyi said the tanker laden with petroleum product (diesel) went up in flames, which left no fewer than 35 vehicles burnt into ashes.

He said that the driver of the tanker was on top speed at the time the incident occurred, as the tanker fell on its side and spilt the content.

He said, “Our men are still on rescue mission, the tanker was loaded with diesel, maybe the driver was on excessive speeding or sleeping while driving, along the line, the tanker fell on his side and it started spilling its content.

“About 35 vehicles were burnt particularly those parked by the sides of the road, the driver and the motor boy died. We can not say anything about other casualties now, I will keep you posted,” he said.

Akinbiyi noted that the deceased had been deposited at the morgue of Olabisi Onabanjo University Teaching Hospital (OOUTH), Sagamu.

He advised motorists to avoid the Lagos-Ibadan Expressway presently and seek alternative routes because of the heavy gridlock the accident had caused.