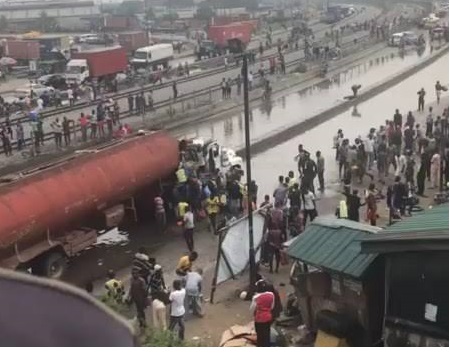 Some Lagos residents were reportedly scooping fuel from a Petrol-laden tanker when it ran into a container lorry in the Mile 2 area of Lagos State at 11 am on Tuesday 16 Oct.

Nigerian Tribune gathered that the incident happened due to the impatience of the tanker driver, who wanted to eschew instructions fro traffic officers.

The Petrol Tanker was affected by the side as a result of the crash, causing intense fuel spillage that sent shivers down the spines of commuters and traders in the area.

Speaking to an eyewitness, Gabriel Adekunle said it would have been averted if he had obeyed the LASTMA officials directing traffic in the area.

“The tanker driver was not patient as the LASTMA officials had directed him to go through another route, but he ignored them and drove in another direction.

“It was when he ignored the officials that he ran into the container lorry, which punctured it and fuel started spilling on to the road,” Gabriel said.

Another eyewitness, Adejumo Tolulope said that the security operatives cautioned people against scooping as it may result to fire outbreak likewise noting that the ugly incident caused intense traffic.

“Policemen and LASTMA officials cautioned the people against scooping the fuel to avoid a fire incident.

“The remaining fuel in the punctured tanker was transferred to another tanker, but the incident caused serious gridlock under the bridge at Mile 2.

“The tanker driver was driving inward Orile when the accident occurred. “It was the LASTMA officials, who informed the fire service and it took their personnel around 45 minutes to get to the scene.

“Normalcy has been restored in the area and the vehicles have been removed from the road,” Tolulope said.