• To Donate ten trucks of relief materials to victims 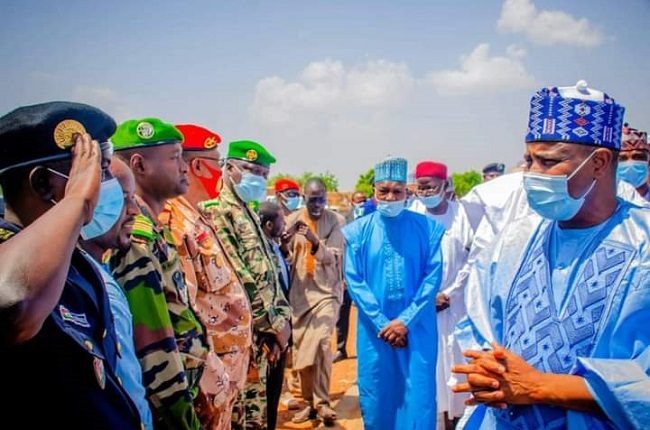 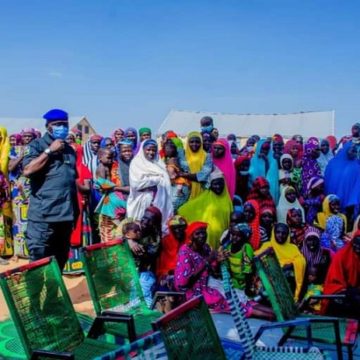 Sokoto State Governor, Aminu Waziri Tambuwal, paid a visit to the Internally Displace Persons’ camp in the neighbouring country of Niger Republic hosting victims of insecurity in some parts of the North-Western states in Nigeria including Sabon Birni and Isa local governments area of Sokoto State.

The governor in his statement at the camp said high powered regional committee between the states of Niger Republic (Dosso, Maradi and Tahoua) and those of North-Westernn states of Nigeria having a border with the Republic- Sokoto, Kebbi, Zamfara and Katsina will soon convene one of its regular meetings to find lasting solutions to the perennial problem of insecurity that has occasioned the displacement of some Nigerians to the area in the Niger Republic.

Meanwhile, the Sokoto State government will soon dispatch ten trucks of relief materials worth millions of naira, comprising of food, clothing materials and other items, to the IDP camps at Dan Dadji Makaou, Shadakori and Garin Kaka villages in Maradi state where Sokoto State indigenes displaced as a result of the activities of some bandits in the Eastern flank of the state are being sheltered with the cooperation of the government of Niger Republic by the United Nations High Commission for Refugees (UNHCR) and some non-governmental organizations.

This is according to a press statement signed by the special adviser on media and publicity to the governor Muhammad Bello and made available to newsmen in the state, on Wednesday.

The statement said at the end of the visit to the IDP camps, Governor Aminu Waziri Tambuwal of Sokoto State and his delegation, comprising of heads of the Nigeria security organizations in the state and stakeholders, including some traditional rulers of the beleaguered Eastern parts of the state had a preparatory meeting with their host, the Governor of Maradi, Hon Zakari Oumarou, some representatives of the security outfits in the Niger Republic and a cross-section of stakeholders.

The governor disclosed the planned bilateral talks earlier during his visit to the Dan Dadji Makaou IDP camp, where he said: “we will meet and discuss with our counterparts here to ensure that this spate of insecurity is rolled back by God’s grace.”

Although a date for the bilateral security meeting has not been announced, he said its primary objective will be to deepen cooperation between the Nigerien states of Dosso, Maradi and Tahoua and the four North-Western states of Nigeria that have displaced persons in the Niger Republic state.

According to him, the governments of the Nigerian states that have displaced persons in Maradi in collaboration with the federal government will work together to ensure the restoration of peace in their affected areas and Nigeria in general.

While expressing appreciation to President Muhammadu Buhari and his Nigerien counterpart, President Muhammad Bazoum for the efforts made to shelter the victims of banditry in Maradi, Gov. Tambuwal also indicated that the security meeting would fashion out how the displaced persons will be returned to their homes once it is feasible to do so.

“We thank God Almighty for making it possible for us to be here today at these IDP camps in the Maradi region of Niger Republic where you are hosting our brothers and sisters.

“It is unfortunate that this has happened. It wasn’t our desire, but we are working hard with our government, the Federal Republic of Nigeria, under the leadership of President Muhammadu Buhari, to re-establish peace in all of the affected areas, not only in Sokoto State but in the entire country.

“On this note, let me extend the felicitations of President Buhari to the President of Niger Republic, President Bazoum, for the hospitality and courtesies extended to our citizens that have had reasons, unfortunately, to leave their comfort zones and be here at these IDP camps.

“We thank the Governor of Maradi, the great people of this region, and, in particular, Garin Kaka and other host communities.

“We must also thank all of the donor agencies that have been supportive of the refugees that are here. We assure you that we are working hand in hand with the Government of the Niger Republic. By the grace of God, soonest these citizens of ours will be taken back to their respective homes in Nigeria,” he assured.

He appealed and cautioned the displaced persons, who have been described as law-abiding by the Nigerian authorities, to sustain their good conduct, urging them to dutifully “continue to respect the laws of Niger Republic and all of the laws of your host communities.

Earlier in his remarks, Hon Oumarou, the Governor of the Maradi region of the Niger Republic, thanked the governor for the visit, saying since the incident happened he has always been in touch with Governor Tambuwal on how to find a lasting solution to the situation.

Hon Oumarou said the number of refugees from Sokoto and other Nigerian states affected by banditry being reported in international media is being exaggerated. He added that the actual figure will be released after a census is being conducted.

He also expressed appreciation to the Sokoto State government through Governor Tambuwal for the previous support given to displaced persons when a similar situation occurred and the ten truck loads of foodstuff and clothing to be delivered to the camps.

A representative of the victims, Malam Anas Habibu, applauded Governor Tambuwal for the visit and the donation of the relief materials. He also thanked the Maradi government and other donor agencies for their support and assistance.

In spite of the huge investment in the water sector by the government and international organisations, water scarcity has grown to become a perennial nightmare for residents of Abeokuta, the Ogun State capital. This report x-rays the lives and experiences of residents in getting clean, potable and affordable water amidst the surge of COVID-19 cases in the state…    Tambuwal visits IDP camp in Niger Republic, talks on convening regional meeting to resolve insecurity

(COMMENTARY): Of Change and Choices in 2023: The Challenge Before Youths, Women and the Elites