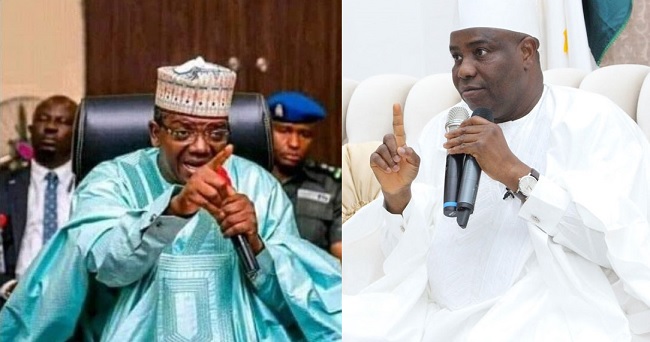 Sokoto State Governor, Aminu Waziri Tambuwal, and the Governor of Zamfara Governor Bello Mohammed Matawalle have reacted to a statement credited to the acting National Publicity Secretary of APC, Mr Yekini Nabena, alleging that a Northwest governor is behind banditry in the region.

Governor Tambuwal said that Mr Nabena must prove his allegation or be investigated. Governor Matawalle in his reaction congratulated parents of the released children and expressed regret towards Nabena’s comments.

Governor Tambuwal in a statement he personally signed and released on Friday stated that, “My attention has been drawn to a statement by the APC acting National Publicity Secretary, Mr Yekini Nabena titled: ‘One North-West Governor Behind Banditry, Killings.’

“In the statement widely circulated in the media– conventional and social, Mr Nabena challenged “security agencies to investigate an intelligence report linking” an unnamed Governor to the increasing wave of banditry, abductions and other violent crimes in the zone.

“There is nothing further from the truth than this. Beyond politics, no Governor anywhere in the country assumed office without swearing to an oath, as prescribed by the Constitution, to  protect the lives and property of the citizenry in his area of jurisdiction.

“To allude and allege that a Governor is consciously undermining the oath of office he took is a skewed logic intended to upturn the rule of law and the jurisdictional dictates of equity and good conscience.

“For this reason, the onus of proof of his allegation rests on Mr Nabena. He should name the Governor he is alluding to as the sponsor of banditry and sundry crimes in the North-West and provide evidence that he (the Governor) is involved in all of that which he alleged.

“Otherwise, the security agencies in the country should invite Mr Nabena to provide evidence of his allegation, assist them in investigating the matter and make sure that justice is done.”

The vice-chairman of Nigerian Governors Forum, however, stated that: “My advice, therefore, is that all well-meaning Nigerians and political stakeholders should consider human lives first instead of playing to the gallery. The framers of the Constitution know why they bestowed much powers, although significantly flawed, in the President to checkmate issues such as those raised by Mr Nabena.

“Playing blame games is not a panacea to the security problem at hand. None of us should play politics with security matters. We should also not play politics with the lives of those we swore to protect. Instead, all hands must be on deck to ensure the collective security of the North and the country in general.”

“Governor Bello Mohammed (Matawallen Maradun, Barden Hausa, Shattiman Sakkwato) congratulates the parents of released abducted children of Government Science Secondary School Kankara, Katsina State, just as he regrets statements credited to the All Progressive Congress on the role of Zamfara State in the fight against banditry in the North-West.

“Governor Matawalle, who has dedicated the whole of his precious time and efforts in the last 100 hours to ensure the release of these innocent children was taken aback when immediately after their release, a statement in the media credited to the National Publicity Secretary of the APC accuses him of harbouring bandits who terrorise the North-west. This is incidentally a similar statement credited to the Katsina State Governor Hon Aminu Bello Masari sometimes ago when in a similar effort, Governor Matawalle rescued 26 innocent girls abducted by bandits in Faskari Local Government Area of the same Katsina State.

“Although Governor Bello Mohammed has resisted temptation to join issues with anyone on these developments, the unfounded accusations are becoming one too many. To correct this jaundiced perception, therefore, the records need to be straightened once and for all.

“It is a known fact that Zamfara State under the APC was the worst hit in terms of banditry in the North-west until the coming of Governor Bello Mohammed on board. His peace initiatives, which is in tandem with proven records in history across the globe as a viable and necessary option to ending guerilla warfare and similar menace of its kind, is hated and rejected by those who fail or lack the capacity to implement it with honesty, resilience and tact.

“Today, Zamfara state is more peaceful than most of its neighbours because Governor Bello Mohammed has been honest in the approach, a path which could have been the final solution to the problem the region is facing.

“It is very uncharitable due political differences to attribute the semblance of peace enjoyed in Zamfara state to criminality of harbouring the bandits to terrorise neighbouring States. It is heart-warming to note that His Excellency President Muhammadu Buhari is quite in tune with every step being taken by Governor Matawalle and has more than once, commended him for the measures he’s been taking to end banditry in the state.

“Governor Bello Mohammed wishes to inform the General public that his “carrot and stick” approach to dealing with the bandits has succeeded in the recent past by settling with those who accepted the deal and has dealt with the recalcitrant ones leading to the elimination of over 300 bandits in only two months. It is, therefore, ignorance or mischief to attribute the Zamfara forests as safe haven for criminals. It is also an unfortunate and indirect indictment of the Nigerian Military which is in control of the Federal Government.

“Governor Matawalle wishes to also call on all stakeholders, especially those of the region, to join hands together and find a lasting solution to the problem at hand instead of the blame game which is totally diversionary and counter-productive.”

Dissecting the Politics of LASU’s  9th Vice-Chancellor: Who will wear the crown?