Tambuwal harps on good governance ahead of partisan politics 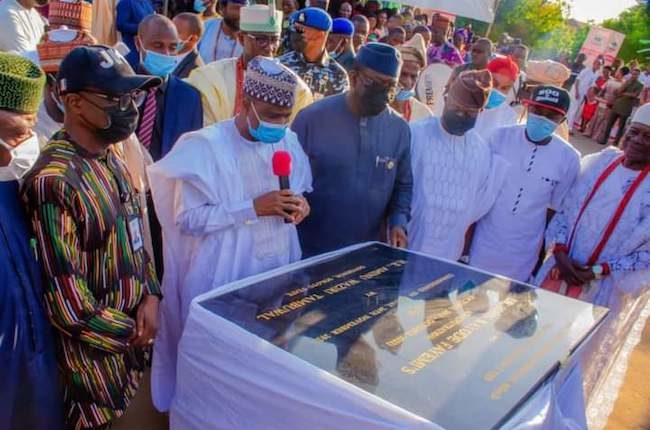 Sokoto State Governor, Aminu Waziri Tambuwal, has observed that what should guide leaders in the country once they have clinched the support of the electorate in whatever capacity and under whichever political party affiliation should be the delivery of good governance.

A statement signed by the special adviser on media and publicity to Governor Muhammad Bello said Governor Tambuwal made this observation on Friday when he commissioned the 13-kilometre road linking Aramoko-Erijiyan-Ikogosi rehabilitated by the incumbent administration of Dr John Kayode Fayemi of Ekiti State.

According to Gov. Tambuwal, “Good governance has no political party. It is about the people. Once the electioneering campaigns are over, the focus of any government should be the people.”

He applauded Gov. Fayemi, an All Progressives Congress (APC) member, for whom he deputises on the Nigerian Governors’ Forum (NGF), for his commitment to the welfare and development of the people of the state through the rehabilitation of the road and embarking on many other projects.

“This is a good road constructed by a local contractor, which is why we should all raise the capacity of indigenous companies while patronising multinationals.”

“The road is significant in promoting agricultural development and tourism. We all know the importance of the Ikogosi warm springs. We know how moribund it was. But now it is in top shape and in business because of the efforts of the Fayemi’s administration in constructing roads like this,” he emphasized.

Earlier in his remarks, Gov. Fayemi said the project was another fulfilment of the campaign promises he made to the people.

Hitherto, the dilapidated road first got any serious attention in 2004, but was abandoned until last year when the incumbent administration awarded the contract for its rehabilitation, the Governor explained.

He enjoined the people of the area to make good use of it and not compromise safety.

Gov. Tambuwal was accompanied to the commissioning by the Chairman of the Sokoto State chapter of PDP, Hon. Bello Aliyu Goronyo; the state Commissioner for Solid Minerals Development, Hon. Abubakar Maikudi and a former member of the House of Representatives, Hon. Victor Ogene.

In spite of the huge investment in the water sector by the government and international organisations, water scarcity has grown to become a perennial nightmare for residents of Abeokuta, the Ogun State capital. This report x-rays the lives and experiences of residents in getting clean, potable and affordable water amidst the surge of COVID-19 cases in the state…Tambuwal harps on good.    Tambuwal harps on good

The Lagos-Ibadan railway was inaugurated recently for a full paid operation by the Nigerian Railway Corporation after about a year of free test-run. Our reporter joined the train to and fro Lagos from Ibadan and tells his experience in this report…Tambuwal harps on good.  Tambuwal harps on good