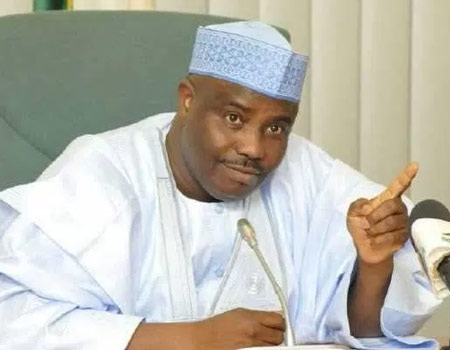 Share
The Governor of Sokoto State, Rt. Hon. Aminu Waziri Tambuwal, CFR (Mutawallen Sokoto) has approved the redeployment of Permanent Secretaries in the State Civil Service.
This is contained in a statement signed by the Special Adviser on Media and Publicity to the Governor, Muhammad Bello, and released to journalists in Sokoto on Monday.
According to the statement, “those affected by the exercise include Sani Garba Shuni, Muh’d Mainasara Ahmad, Abubakar Muhammad (Mni), Musa M. Gobir and Muázu Suleiman, who has been moved to the Ministries of Works, Basic and Secondary Education, Health, Information and Establishment respectively.

“Also posted to the Ministries of Water Resources, Finance, Science and Technology, Culture and Tourism, Solid Minerals as well as Rural Development are: Dahiru Abbas, Abubakar Muhammad, Moh’d Abubakar Ladan, Ahmed Bello and Malami Ladan. In the same vein, Hajiya Aishatu Muh’d Dantsoho, Almustapha Othman Ali, Umaru Muh’d Wali, Hassan Maccido and Haruna Ahmed will take charge of the Ministries of Women Affairs, Higher Education, Agriculture, Energy and Local Government.
“The new Permanent Secretaries posted to the Ministries of Justice, Commerce, Lands and Housing Religious Affairs and Social Welfare are Rilwanu Gogo, Chika Umar, Ahmad Moyi Tambuwal, Mohammad Bello Mailato and Hauwa’u Abubakar Mohammad”
Meanwhile, the erstwhile Director-General Media and Publicity to the Governor, Abubakar Shekara will now move to the Ministry of Budget, just as Ibrahim Adamu, Ummaru Abu Dagawa, Mu’azu Madawaki and Dr Attahiru Maigandi are the new Permanent Secretaries at the Ministries of Home Affairs, Animal Health, Environment and Careers and Special Services.
Also, three of those affected by the new posting have been directed to report to the Office of the Head of Service for re-assignment while one of them is posted to the office of Admin and General Services.
The statement further disclosed that others were moved to the Civil Service Commission, Political Department, Government House, Local Government Service Commission, Agency for Mass Education, State Universal Education Board (SUBEB), the International Fund for Agricultural Development (IFAD) and the Sultanate Council.
While congratulating the Permanent Secretaries on their new posting, Tambuwal challenged them to employ their competence and wealth of experience to ensure efficiency and optimum service delivery to the people.