MUHAMMADU SABIU reports that the Zamfara State government, not minding the horrendous activities of the bandits, has taken it upon itself to grant them amnesty to bring peace to the state. 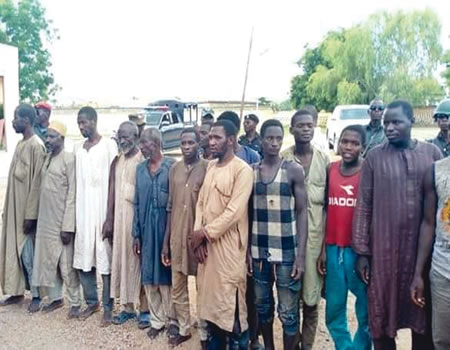 FOR the past decade, Zamfara State has been the under siege of bandits. Statistics obtained by Arewa Live from a government source indicated that no fewer than 7,000 people had been killed, 500 communities were destroyed and over 21,000 people displaced as a result of attacks by bandits.

At his inaugural address on May 29, 2019, Governor Matawalle in clear terms told the bandits to embrace peace or leave the state, saying his government though was ready to give amnesty to any bandit who surrenders his arms and embraces peace.

In furtherance of his peace moves, Governor Matawalle has since held talks with critical stakeholders like Miyetti Allah Cattle Breeders Association of Nigeria (MACBAN), security personnel and traditional rulers across the state.

During his meeting with the national leadership of MACBAN, under the leadership of Muhammad Kiruwa three days after he took over the reins of power, the governor reportedly told the Fulani leaders to call their men to order insisting he wanted peace to return at all cost to the emImmediately after his meeting with the MACBAN leadership, the governor also travelled to Abuja to meet with President Muhammadu Buhari and pleaded with him to assist in bringing peace to the state which he agreed to do, not only in Zamfara but in the entire North West.

Not long after this visit, Arewa Live gathered that the federal government deployed more troops comprising both mobile policemen and Air Force personnel to the state which to a large extent have contained the bandits.

In the same vein, the governor did not waste time in approving the suspension of two traditional rulers over their alleged links with the bandits. The traditional heads were the Emir of Maru, Alhaji Abubakar Ibrahim and the senior district head of Gyado, Alhaji Ahmed Lawal.

While advising the traditional rulers to hand over all government property in their care, a committee, it was revealed will also be set up to investigate their links with the bandits.

Thereafter a nine-man committee under the leadership of the former Inspector General of Police, Muhammad Abubakar was set up to head the investigative panel with the mandate to provide solutions to the lingering security challenges bedeviling the state.

Apart from this committee, the governor constituted a peace, dialogue and reconciliation committee under the chairmanship of the state Commissioner of Police, Alhaji Usman Nagogo to meet with the bandits and reach a truce on the need for them to surrender their arms and embrace peace.

While some pundits commended the governor for taking such bold steps, others think that bandits do not deserve such treatment or any form of amnesty as they are simply a bunch of criminals.

For example, a former governor of the state, Alhaji Abdulaziz Yari was opposed to dialogue with the bandits. In a recent interview granted the media, he insisted that government has no business sitting with bandits for any form dialogue.

According to him, when he was at the helm of affairs, he set up a similar committee under the former deputy governor, Ibrahim Wakkala to disarm the bandits, but instead of that only members of vigilante groups were coming forward to drop their weapons.

“At the end of the disarmament exercise, only 9,000 units of arms were recovered with the bulk of the arms coming from vigilante groups, while only a few bandits surrendered their arms to the committee,” the former governor stressed.

Thus, Yari believes that the only language the bandits understood was matching force with force. However, such position has been berated by a top security expert in the state who pleaded for anonymity in an interview with Arewa Live.

The source remarked that under Matawalle, peace talks with the bandits happen to be the best approach, saying, “open confrontation will not work as we have done that before but instead compounded the crisis.

“We need to sit down with the bandits to discuss. These people (bandits) are human beings. They are living with us. They are also tired.”

The security expert was optimistic that with the current steps taken by Governor Matawalle to have direct contact with the bandits and kidnappers, there is hope that the peace building process will witness tremendous success.

Explaining the rationale for the peace talks, the state governor said “the government took the decision to negotiate with the bandits so as to end the insecurity in the state and allow the people to go about their normal activities without fear.”

He added that it had been over three weeks since any attack was recorded in the state adding that the pressure mounted on the criminals by the military through air and ground assaults had helped in halting the attackers from carrying out any further activities.

He was, however, optimistic that the plan to resettle repentant bandits among them on a 100-hectare land to be carved out for the purpose of animal husbandry in each of the three senatorial zones of the state will come to fruition. The RUGA settlement, he noted, will have social amenities like earth dams, primary and secondary schools and hospitals, among others.

There were also high expectations that the success of the above projects in the three senatorial zones will encourage others to dump banditry for a more productive lifestyle.

Unfortunately, however, the peace talks received a jolt recently when another attack was recorded at Jirrawa community in the state. In spite of this, however, the state governor while reacting to the incident was optimistic that sustainable talks with the bandits will end the crisis.

Also speaking on the attack, the Secretary to the State Government, Alhaji Bello Maru contended that the attack will not dampen the efforts of the state government to carry on with the peace dialogue.

“The state governor, (Muhammad Bello) Matawalle is ever ready to ensure that the people of state are free and businesses return to every part of the state,” he declared.

Speaking on the relative success recorded by the peace talks, the state commissioner of police, Usman Nagogo who heads the reconciliation committee, expressed optimism that talks with the bandits had yielded positive results.

According to him, no fewer than 300 captives have so far been released including nine Nigeriens. He said the abductees including women and children had since been reconnected with their families.

Nagogo revealed that 25 captives were released in Maru; 15 in Shinkafi and Zurmi and 11 captives released in Maradun local governments, among others, adding that “we have rescued about 300 captives from the bandits in the last 20 days of peace talks.

“I can confidently assure you that the peace initiative by Governor Bello Matawalle which I led in the state is working as can be seen in the release of kidnap victims and the repentance of several bandits.”

Nagogo stated further that it “does not mean that the hardened criminals are no longer there; I am in constant contact with bandit groups in all the bushes and our discussions have been positive leading to the peace we are now enjoying.

“On this Jirrawa (recent attack) issue, I have spoken with my contacts around the area and the repentant bandits promised to meet to fish out the perpetrators of this latest attack and hand the culprits over to me. This is in the spirit of the partnership we are now enjoying.” he said.