Arts and Culture
By Akintayo Abodunrin On Apr 5, 2020 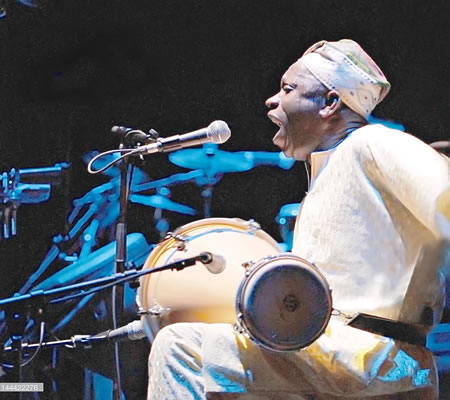 The two-time Grammy award winner and drummer is an interviewer’s delight. He shares about his life and music during his recent vacation in Nigeria.

WE did it in the cemetery. That is the interview with Lekan Babalola. But it was no ordinary cemetery where your heart would be in your mouth at the slightest sound, especially as it is around 7 pm. It was the Ebony Vaults, Ikoyi, the final resting place of the affluent. Beautifully designed, landscaped, containing exotic birds, well illuminated and owned by Deinde Harrison, his friend from way back.

The appointment with the two-time Grammy winner ought to have held in his home in Victoria Island, but a minor fire incident caused a change of venue. So, here I was with the renowned percussionist, at 7 pm in a beautiful cemetery talking about his art, Ifa beliefs and musicianship, among others.

Though born in Lagos, Babalola’s father hailed from Ile Ogbo, Osun State and he didn’t visit the town until he was six years old in 1966. Naturally, he fell in love with it and later attended the neighbouring Iwo Grammar School for his secondary school education.

The ties with Ile Ogbo runs deep till today, as he and his English musician wife, Kate Luxmoore, have a project there. They want to build an artistic centre comprising a children’s library, guest rooms, a well-stocked library, a vocational centre and a tennis court.

Though he lives in the UK, Babalola enjoys playing in Nigeria and seizes every opportunity to return home. “I’m a sucker for Nigeria. I’ve been out of the country for 40 years; I left when I was 20. I came back in; a kind of compulsory coming back because of immigration irregularity from 1986 to 1989. I left this shore 1980, returned in 1986 and went back in 1989. When the opportunity is there for me to return to Nigeria, I jump at it,” he says.

The desire to perform gigs in Nigeria, made him sign on with Temple Management two years ago and then Temple Records last year. “I’m a Temple artiste; I just happen to live in England. It’s all because of my desire always to come back to Nigeria,” he explains.

Being in Nigeria regularly also made him establish the Eko Brass Band, an academy for performing the sound of Lagos Island; the music of Ebute-Ero to Onikan.

The globetrotting artist says, giving further insight into the establishment of the band, “I was born at Lagos Island Maternity. Lagos Island, where I was born, is an exceptional place. It doesn’t have a museum, like New York City or London or Paris. What’s the history of Lagos Island? If we begin to play this music, the Lagos historian will start to trigger their memory, to tell us of the culture of Lagos. So, I established the Eko Brass Band, which is the royal sound of Lagos to be the Asoju Oba. We are the John the Baptist that talks about the city.”

When he’s not around, the musicians manage the band. And what’s more, the album they have been working on for the past seven years is almost ready.

Babalola, the father of three children who were in town with him in February on vacation is an Ifa devotee though his father was a clergyman. He has several Ifa related projects including Ifa poems on contemporary music called ‘Yoruba Sonnet’, an exhibition called ’16 Pieces’ and a forthcoming album called ‘Sacred Funk’.

“What pushed me into this way of life is that I had a dream. American impresario, John Coltrane came to me in that dream. I was working with Al Blakey, jazz drummer as his personal assistant but when I had that dream in art college, John Coltrane and Al Blakey came to my room and John gave me a saxophone. I’m not a sax player, but he said this is your legacy, look after it. So, the more I listened to John Coltrane, I found that this is very close to the way that the Babalawo will recite Ese Ifa, in style (. You can hear the melody in it. It’s a poem; it’s a sonnet. When they are going to run the commentary, they do it after they have recited the verses.

“What we are getting is poems, songs and sometimes when my wife listens to the OduIfa melody, she goes by the piano to try and trace it. She will say they are in D Minor, F 7, 8 Major. Then you begin to sit down and say to yourself, this Ifa that these guys are trying to throw away, this is the foundation and epitome of their culture. I began to understand that Ifa is not a religion; it’s a piece of knowledge. And knowledge is not owned by a church or mosque, and the atheist too, he has knowledge. Ifa is the way to communicate with God for the Yoruba people.”

How does he feel being among the elite group of Nigerians that have won the Grammy, not once but twice?

He responds: “I’m very grateful, and I continue to be thankful because I didn’t go into the music business to win a Grammy. It is a call by Almighty God that this will be my voice to the world. I didn’t plan it. I minded my business when I had the opportunity to go and play on the first one by Malian musician called Ali FarkaToure. On an album called ‘In the heart of the moon’ produced by Nick Gold of World Circuit Records in London. I was paid; it was excellent. One day, I was at my Agent’s house in Kilburn. He ran out of his living room, BiyiAdepegba, who is the London African Music Festival producer. And he was breathing, hyperventilating even and he started crying, congratulations. Lekan, congratulations. I said, what is these congratulations? He said Lekan; you just won a Grammy. I said, what is it? What is the Grammy? And Biyi started crying again.

I didn’t know what Grammy is; it’s never been in my encyclopaedia when I went into music. All I knew was I wanted to be like Quincy Jones. I wanted to be a fantastic producer because I buy a lot of records. I go to concerts; I see musicians. I want to be like that guy, produce meaningful music.

“Then I had the opportunity to work with a lady, an African-American, the Number One jazz singer in the world called Cassandra Wilson. That one, I did a lot of work more than what I did on Ali FarkaToure’s album. We did the album in Jackson- Mississippi, in the South. We rented a whole house; they brought the studio from LA. Everybody was living there. The Engineer was living in a hotel in town, but the lady and I were there. It was kind in the middle of nowhere. We finished the work; everybody went their ways. Then, we started touring. We were playing at Blue Note in New York one day, and she came into the men’s dressing room and said we’ve just been nominated for a Grammy.

On his preference for percussion, Babalola says, “I think it was chosen for me right from when I was young. I still don’t know, you research. I started at age five at Aladura Church, so I decided to stick to what I know. Of course, I ventured out, but of that instrument itself, when I went into the New World, I realised I didn’t know much about it, so I started researching. It’s endless.”

Given the opportunity to start again, Babalola who abandoned engineering for music says he will remain in the arts.

“I have no regrets. People I’ve met; places I’ve been to, no regrets. Sleeping in hotels where Presidents and others are sleeping in Asia? No regrets. I’m grateful,” he says as we end our chat in the beautiful garden of the dead.