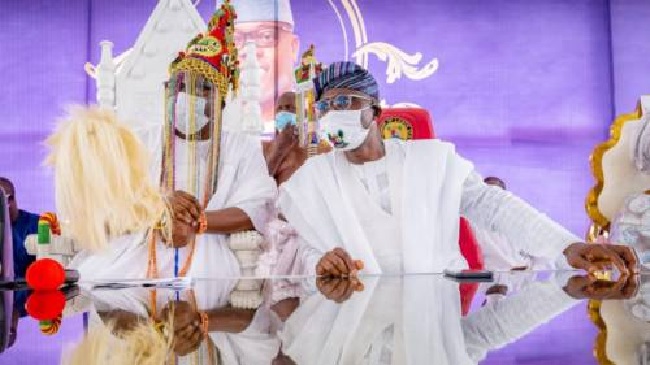 Environmentalists and other experts have expressed concern over the negative impact of climate change, especially during the COVID-19 pandemic, calling on the Lagos State government to partner with communities in order to build a resilient and sustainable city in the face of global warming challenges.

The experts, which also include economists and seasoned administrators, made the call while speaking at the 1st Annual sustainable cities dialogue in commemoration of the coronation of Oba Abdulwasiu Omogbolahan Lawal (Abisogun II) as the 15th Oniru of Iru-Land.

This was just as they called on the state government to collaborate with the Kingdom of Iruland and other communities to develop a sustainable city.

According to them, building sustainability and resilience of communities is a task that must be undertaken by everyone, saying provision of basic resources and resilience against environmental threats must be prioritized for different groups of urban inhabitants, especially women and youths.

Besides, they said such an approach is a crucial and potent force for addressing sustainable growth, urban development and prosperity in any city.

The Executive Director of LSE Cities, Dr Philip Rode, who spoke on the theme of the virtual conference entitled: “Building sustainable and resilient communities in the new normal,” said that Lagos’ population could also serve as potential if the state could harness the opportunities offered by the growing population.

Philip, who is also the Associate Professorial Research Fellow at the London School of Economics and Political Science, said there was a need for cities to adopt 21st Century green city models, which he described as compact, connected and clean.

Speaking on the means to attaining a sustainable city, the Lagos State Commissioner for Environment, Mr Tunji Bello, described the conference’s theme as apt and coming at a no better time when the whole world is experiencing the impact of climate change and slowly recovering from the global pandemic Covid-19.

The commissioner said there was a need for Iru Kingdom to engage the service of researchers with a view to discovering hidden potentials of the kingdom.

The Chief Executive Officer, Contact Consulting, Mrs Foluso Olaniyan, in her contribution, said that a quick win that would fast track the development of Iruland is for the Kingdom to set up Iru Infrastructure Development Funds among firms and other stakeholders in Iruland to ensure the provision and protection of infrastructure for within their location.

Erelu Kuti IV of Lagos, (Dr.) Abiola Dosumu, who spoke on the approach to upgrade slum communities, canvassed the need for the state government to work with traditional institutions and local communities to improve the living conditions of the people, adding that Iru kingdom could also explore water transportation potentials within and outside the kingdom.

Meanwhile, the Senior Special Assistant (SSA) to the President on MDGs, Princess Adejoke Adefulire, lauded the bold steps taken by Oba Lawal, saying with such approach, the Iru Kingdom was on the right track as far as resilient city projects were concerned.

She added that the only way to achieve sustainable development goals is through collaborations with relevant partners and authorities.