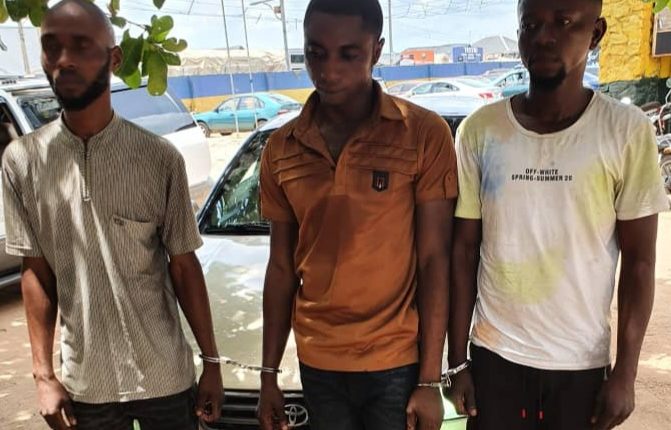 The 30-year-old suspect, James Akpos is also known as ‘General,’ who’s from Ekeremor in Bayelsa State, was arrested on April 24 at Abraka

‘General’ was arrested in connection with the alleged killing of policemen at an eatery in Ughelli on January 10, 2021.

Akpos’ confession, it was gathered, led SAKCCS operatives to his gang’s hideout at Bomadi waterside on April 30 where they engaged the operatives in a gun battle.

Unable to withstand the superior firepower of the police operatives, members of the gang reportedly fled into the river with various degrees of gunshot injuries.

Two AK-47 rifles, 114 rounds of 7.62 ammunition with six magazines were recovered from the scene while a manhunt for the fleeing members of the gang has begun.

Similarly, three members of a car-snatching syndicate have been arrested by police operatives attached to 51pmf, along Abraka/Eku expressway in the afternoon of April 29.

The suspects were identified as Seidu Mohammed, 27, Samuel Daniel, 28, and Yusuf Mekudu, 28, all of Oworo Estate in Lokoja, Kogi State.

The trio were said to be travelling in a tinted Toyota Camry car with Reg. No. LKJ 52 AW Gold colour when they were flagged down by the police.

“They could not give a satisfactory account of themselves and how they got the vehicle, so they were arrested and taken to the police station, investigation commenced immediately.

“During interrogation, they confessed that they stole the car on 28/04/2021 at about 12:30hrs from where it was parked at International Market, Lokoja,” Bright Edafe, acting spokesperson of the Delta Police Command, noted.

Edafe, who’s a Deputy Superintendent of Police (DSP), confirmed the arrest of the suspected kidnap kingpin and car thieves, adding that investigations were ongoing to nab fleeing kidnap suspects.

He urged members of the public to provide useful information to the police that will lead to the arrest of the other fleeing members of the gang with an assurance of confidentiality.

No rape, sexual incident in our school — Management of Rock ‘N’ Garden