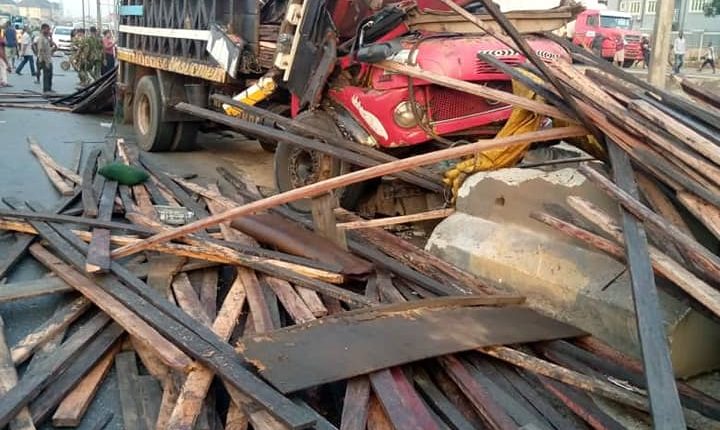 Mr Micheal Chimezie Okorie, a 25-year-old man was on Sunday allegedly chased to death by suspected revenue collectors at the overhead bridge in Onitsha, the commercial city of Anambra State.

Tribune Online gathered that the deceased, a driver of an articulated truck was reportedly being pursued by the suspected “revenue collectors” stationed at overhead bridge, Onitsha when he suddenly lost control and crashed into a concrete barricade in the area.

The incident reportedly caused heavy traffic gridlock in the area as aggrieved youths blocked the highway with bonfires.

The victim was rushed to a nearby hospital where he was confirmed dead by a medical doctor.

Police spokesperson, SP Haruna Mohammed confirmed the incident, saying the Commissioner of Police, John Abang has ordered for a full scale investigation into the matter.

According to him, “on 6/12/2020 at about 4 am, there was a report of fatal motor vehicle accident along Asaba/Onitsha Expressway by Coca-Cola market Onitsha involving a Mercedes Benz 911 Lorry with Registration No ACA -178-XA loaded with timber and driven by one Micheal Chimezie Okorie ‘m’ aged 25years of Oduma in Aninri LGA of Enugu State.

“The accident occurred when the truck driver who was allegedly being pursued by suspected “revenue collectors” stationed at Head bridge Onitsha suddenly lost control and crashed into the concrete barricade near Coca-Cola Market.

“As a result, the driver of the lorry became unconscious and was rushed to Toronto Hospital by Police Patrol team attached to Okpoko Division where he was confirmed dead on arrival by a medical doctor on duty.

“Corpse photographed and deposited at the same hospital morgue for post-mortem examination.

“However, following the incident, aggrieved youths in their hundreds went on a rampage and blocked the highway, setting bonfires on the road, but were later persuaded to disperse through the joint efforts of the police, union leaders and state government officials.

“Meanwhile, the State Commissioner of Police, Mr John Abang, who is deeply saddened by the unfortunate incident has ordered for a full-scale investigation into the matter.

“The CP further assures the public that perpetrators would be arrested and brought to book.”