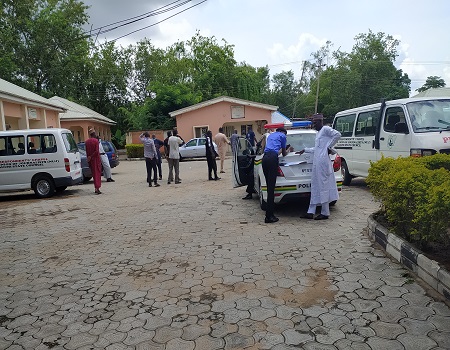 It took the quick intervention of Police officers led by the PPRO, Bauchi State Police Command, DSP Ahmed Wakili to save the Bauchi NUJ Press Center from being vandalized by suspected political thugs loyal to a faction of the All Progressives Congress (APC) in Bauchi state.

The thugs numbering over 50 stormed the Press Center at about 10.40 am and started throwing stones and other dangerous objects at Journalists who had gathered to be addressed by another faction of the APC.

The thugs took over the MA Abdullahi Hall venue of the briefing, disorganized the arrangements and chased everybody out of the Hall thereby stopping the briefing.

The Leader of the faction, barely read the opening paragraph of the briefing calling for the dissolution of the State working Committee led by Uba Ahmed Nana as well as other Executive members from the wards and LGA levels when the thugs hijacked the proceedings.

Some of the thugs were shouting on top of their voices that nobody can remove Uba Nana or any member of the State Executive of the APC.

When contacted through phone, Uba Ahmed Nana denied knowledge of anything like thugs been Sent to disrupt any Press Conference by anyone stressing that as the Chairman of the state APC he is not under any threat.

The Police later went away with all the parties to the Command headquarters for questioning while the briefing was put on hold as of the time of this report.